Gannet AS.Is of 820 Sqn FAA, up from Eglinton in February 1957. The squadron joined HMS Bulwark that June, but was disbanded in December of the same year.

Just some of the FAA Fairey Fire­flies which lined the runway at Lee-on-Solent for the Coronation Review of the Fleet on June 15, 1953.

The Fairey Rotodyne of 1957 on an early flight. 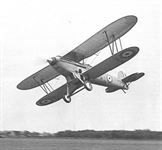 The sleek Fairey Firefly IIM biplane of 1930 was of all-metal construction under its fabric covering, and was powered by the Rolls-Royce F.XIS liquid-cooled V12 engine, later redesignated Kestrel IIS.

A FOX THAT NEVER GOES TO EARTH: Another view of the new Fairey Sea Fox (Napier Rapier VI) light reconnaissance seaplane.
The Napier Rapier-powered Fairey Seafox of 1936, which distinguished itself in World War Two as a spotter during the Battle of the River Plate. The type served with the Fleet Air Arm until 1943.

The Hendon, Fairey’s only heavy bomber.