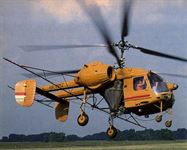 A Hungarian-operated Kamov Ka-26, with fuselage "box" removed, flying in the agricultural role, with hopper and spray bars. 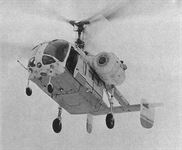 A prototype of the Ka-26, which has served primarily in civil guise. The entire fuselage "box" can be removed and the aircraft flown with the rear fairing attached directly to the cabin.

A production model of the Ka-26, which has served primarily in civil guise.

About 850 examples of the Ka-26 were built, and these have been used in a number of diverse roles. This example has a magnetic anomaly detection ring for geological survey.

As a replacement for the Ka-25 in the ASW role, the Ka-27PL Helix-A has been in service since 1982. It is a "state-of-the-art" derivative of the earlier type, with updated equipment throughout.

Один из двух Ка-28, поставленных в Югославию
An export version of the Ka-27PC carries the designation Ka-28 and is here seen in service with the Yugoslav air force.

The Ka-27PS, known to NATO as Helix-D, is configured for search and rescue and plane guard duties aboard the Soviet aircraft carriers. External fuel packs are a feature.

Details of the Ka-27PS Helix-D, including the fuselage-side fuel packs and SAR hoist in the open door 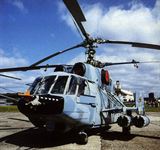 The latest Kamov co-axial helicopter to enter Soviet service is the Ka-29TB, a shipborne assault transport.

The Ka-29TB is a variant of the Ka-27 for the assault transport role, with added internal and external armament.

The Ka-29TB Helix-B, which has a widened front fuselage, outrigged rocket pods and a built-in forward-firing gun. 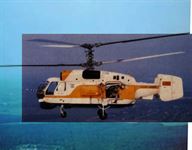 The second Ka-32T demonstrating automatically-controlled flight with the pilots waving from the rear of the cabin. 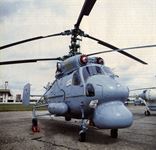 A Ka-25BSh on display in Moscow during 1989, showing the current blue-grey finish for Soviet Navy service. The flat-bottomed radome houses search radar known to NATO as Short Horn. 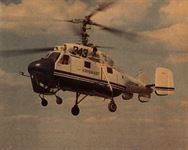 Only a single example of the Ka-25K flying crane was completed, with an aft-facing pilot's position under the nose.

Export example of the Ka-25BSh in the markings of the Yugoslav air forces.

Export example of the Ka-25BSh in the markings of the North Vietnam air forces. The helicopter is in the museum at Hanoi, but further Ka-25s have been delivered to Vietnam this year

The designation Ka-20 applied to three prototypes of the helicopter that went into production as the Ka-25, known to NATO as Hormone and, to date, the most important Kamov product for Soviet naval use. The "missiles" on this prototype are thought to have been unprepresentative dummies.

Ка-25ПЛ с увеличенным бомбоотсеком
Some Hormone-As have a deepened and lengthened weapons bay, presumed to house weapons, possibly guided torpedoes, that would not fit into the standard bay.

A standard Ka-25BSh Hormone-A, showing the weapons bay and sonobuoy storage in the underside of the fuselage.

The latest co-axial helicopter to emerge from the Kamov OKB is known by the NATO code-name Hokum, and is apparently intended as a ship-based attack type. The designation may be Ka-34, although Ka-41 has also been reported.

A larger, more bulbous nose radome (for the NATO-named Big Bulge radar) identifies the Hormone-B variant of the Ka-25. As shown, the undercarriage could be "retracted" when the radar was being operated.

The Ka-10M single-seat observation helicopter was the first product of the Kamov OKB, but not Kamov's first co-axial to fly.

Корабельный многоцелевой вертолет Ка-15.
The Ka-18 and Ka-15 (shown) were related designs, both built in some quantity in the 'fifties.

The prototype of the Kamov Ka-126 on display in Moscow last year. This is a straightforward turboshaft derivative of the Ka-26 illustrated elsewhere in this account.

Камов Ка-18
Kamov Ka-18 four-seat helicopter (275 hp AI-14V engine) and Ka-15 were related designs, both built in some quantity in the 'fifties.