Vickers Valiant XD816 resplendent in the white finish carried for most of the type's Service career.

Apart from the intake for the artificial feel system near the base of the fin and the nose refuelling position, the Valiant remained a clean aircraft when it entered RAF service, this unpainted example photographed on June 15,1957, bears the badge of No 7 Sqn.

The dull overall finish soon gave way to anti-flash white as shown on XD816 pictured at the RAF’s 50th anniversary at Abingdon in June 1968.

To accept the greater mass flow of the more powerful RA14 Avons, the second prototype (WB215) was given enlarged engine intakes.

Saunders-Roe at Cowes produced the Valiant's pressure cabin. In an emergency, the canopy top could be jettisoned by the firing of 26 explosive bolts.

The DH Super Sprite RATOG unit. The small aerofoil at the front was to give clean separation when the unit was jettisoned after take-off.

Valiants on the line at Weybridge where all 104 production aircraft were built. The two prototypes were produced at Fox Warren, near Wisley.

The second prototype Valiant made its first flight on April 11, 1952, and went on to test the large underwing fuel tanks during October 1953. It ended its days on the Ministry ranges at Foulness Island in 1962. 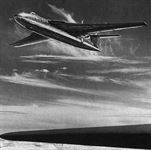 For an aircraft designed for high-level operations, the Valiant suffered premature fatigue when flown for prolonged periods at low level. The gloss camouflage was to no avail and the fleet was grounded in December 1964.

Sole Mk II was WJ954 which was strengthened for low level flight and had a number of external changes including the large fairings aft of the wing for the main undercarriage. It was scrapped in 1958.