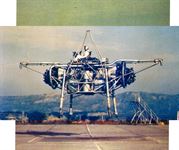 Following the Nene-powered Flying Bedstead, development of the concept continued with the Short SC.1. Powered by Rolls-Royce RB.108 lift engines, the SC.1 was the first true aircraft prototype to use V/STOL technology.

This view of the Balzac shows it in its final configuration, with a ventral fin and tail-parachute fairing at the base of the fin.

This very rare air-to-air shot of the Balzac, possibly extracted from a filmed sequence, shows it in a transition mode, with the RB.108 intakes and jet-pipe fairing doors extended, behind the forward deflectors. Just visible on the side of the tail-cone is the circular aperture for the starboard yaw reaction control or puffer-pipe.

One of the last photographs available of the Balzac before its second and final accident shows it operating from its mobile grid platform from a wooded clearing in a representative operational environment. The small white fairing on the nose cone is alongside one of the twin puffer-pipe outlets for pitch control, with two more under the Orpheus tailpipe.

Initial hovering trials began with the Balzac securely tethered to the test-rig at Melun-Villaroche, with a very limited degree of available movement. Note the non-retractable undercarriage, as evidenced by the lateral bracing struts on the main landing-gear legs. 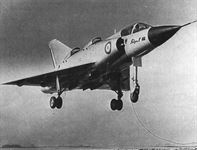 With its tethers removed after only three test-flights, the Balzac was linked to the ground only by a telebrief cable. This view also shows further details of the extended intakes, with their louvres open for maximum airflow, and the jet-pipe fairing doors open beneath the fuselage. Two small white circles outboard of the mainwheel legs are the lateral puffer-pipe outlets.

As Rolls-Royce's first dedicated jet-lift engine, designed for vertical installation, the RB.108 is shown here in a typical paired installation. 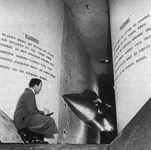 Специальный макет «Бальзака» в аэродинамической трубе
Most of the Rolls-Royce wind-tunnel tests at Hucknall were concerned with assessing the airflow through the vertically-mounted lift engines in various phases of operation, for which a forward-mounted deflector is being studied under this scale model half-fuselage.