Originally built with Cirrus-Hermes engines as the second Westland IV, G-AAGW was modified to Wessex standard with the incorporation of Genet Majors. While operating with Imperial Airways, ’AGW was chartered by the Great Western Railway for a pioneer service between Cardiff and Plymouth, where it is seen here, in April 1933.

Originally OO-AGF in Sabena service, G-ADFZ was acquired by Cobham Air Routes in March 1935 and used extensively on the company’s short-lived Croydon-Guernsey service. In September that year it was involved in a mid-air collision with an Avro 504 at Blackpool, but was repaired and sold to the Trafalgar Advertising Co Ltd in early 1937.

Showing the raised cockpit fitted to PS&IoWA’s Wessex to good effect, G-ABVB passes Spithead while plying its trade between Portsmouth and the Isle of Wight. The company inaugurated its Wessex service in June 1932 with four daily Portsmouth-Ryde flights, the aircraft opening a London (Heston)-Ryde service in May 1934.

FOR THE ISLE OF WIGHT SERVICE: A Westland "Wessex" (three Armstrong-Siddeley "Genet Majors") recently delivered to the Portsmouth, Southsea and Isle of Wight Aviation, Ltd.
With square Dural tubes replacing the wooden wing construction of the standard Wessex, and a complete metal fuselage, G-ABVB was designed specifically for PS&IoWA’s high-density services, which called for a beefier structure to give it the ruggedness required for the more frequent take-off and landing cycles of short-haul routes. 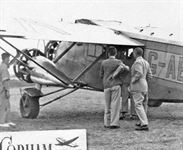 Passengers prepare to board PS&IoWA’s G-ABVB. With the suspension of the Cobham Channel Islands service, Wessex G-ABAJ was leased from Cobham to PS&IoWA during a fleet expansion in the second half of 1935, and, like ’DFZ, also went to Trafalgar to be fitted with battery-powered neon lighting equipment.

Belgian national airline Sabena acquired four Wessexes - OO-AGC, ’AGD, ’AGE and ’AGF - during the summer of 1930; OO-AGD was destroyed in a hangar accident at Evere in December 1934, but the three remaining examples were purchased by Alan Cobham in March 1935 and put to work on his Bournemouth-Guernsey route.

Wessex G-ABVB was built specially for PS&IoWA and incorporated a number of modifications, including a strengthened undercarriage, increased rudder area and a reduction in baggage area in order to accomodate eight passengers instead of the standard six.

Following its brief time with Cobham Air Routes on the Channel Islands service, the original Westland IV prototype, G-EBXK, upgraded to Wessex standard, joined Alan Cobham’s National Aviation Day Displays Ltd, with which it is seen here, probably at Ford. It was withdrawn from use in May 1936.

A splendid contemporary advertisement poster for Portsmouth, Southsea & Isle of Wight Aviation Ltd’s air ferry service between Portsmouth on the mainland and Shanklin and Ryde on the Isle of Wight, featuring the company’s specially modified Westland Wessex trimotor, G-ABVB.

Only two Saro Windhovers were built, Jersey Airways acquiring the second, G-ABJP (c/n A.21/2) in May 1935 from the Hon Mrs Victor Bruce, who is seen here in the aircraft preparing for one of her several attempts on the world flight-refuelling endurance record in 1932.

Windhover G-ABJP while in service with Channel Islands Airways, the holding company for Jersey and Guernsey Airways. The aircraft inaugurated services between Guernsey’s St Peter Port and St Brelade’s Bay in Jersey in June 1935 (and to Alderney from August), the fare being set at 12s for a single journey and 18s return.

The second Saro Windhover, G-ABJP, in the company’s East Cowes hangar in the early summer of 1931. Before being acquired by The Hon Mrs Victor Bruce, it was owned by millionaire Francis Francis, who sold it in September 1931 to Gibraltar Airways for use on its Gibraltar-Tangier service.

Originally built as a pure seaplane, the first Windhover undergoes inspection at Saro’s Solent Works (West Cowes) in 1930. Originally given the New Zealand registration ZK-ABW, the aircraft went to Australia instead, where it served Matthews Aviation as VH-UPB. Seen here without the auxiliary winglet above the engines later added to both Windhovers, ZK-ABW made its first flight on October 16, 1930.