Kamov’s Ka-32 has proved well suited to a wide variety of civilian roles, the Ka-32T Helix-C , as illustrated here, is the basic model designed as a utility transport, air ambulance or flying crane. Other models include the Ka-32K which is optimised for the flying crane role with a retractable second pilot gondola under the fuselage and the Ka-32A1, the latest variant which is a dedicated firefighting version.

Bond Helicopters is one of a number of UK operators extensively involved in the support of UK offshore oil exploration and this Eurocopter AS 365N Dauphin 2 is one of six operated by the company, together with seven earlier model SA 365Ns and a number of other types. In addition to offshore work, the Dauphin 2 is also operated in the corporate transport, air ambulance and EMS roles, is in service with the US Coast Guard and has also been developed into various military variants.

Still in the development phase, the EH 101, seen here in its civil utility guise which includes a rear loading ramp, is also offered as the 30-passenger Heliliner in addition to wide-ranging military roles. No customers have yet been announced for the commercial variants, which have yet to be certified.

Building on the experienced gained with the Bell 206 family, which has logged over 32 million flight hours, the 206LT is the twin-engined development of the LongRanger. It is Bell's proud boast that the 206LT is the world's only production twin that performs as well on one engine as it does on two.

A mock-up of the 19-passenger civil variant of Sikorsky's proposed S-92, which has yet to he officially launched. Intended to be cheaper to maintain and operate than other helicopters in its class, the S-92 in envisaged in a variety of roles including offshore oil support, cargo, aeromedical, search and rescue and commuter operations.

Although the original Mi-8 first flew in June 1961, versions of the same basic helicopter continue to be developed, the Mi-17M illustrated here being the current production version being built by Kazan Helicopters Production Association. The Mi-17(1) described in the text is essentially the same helicopter with the same TV3-117VM turboshaft engines giving improved rates of climb and hover ceilings.

The PZL-Swidnik W-3 Sokol (Falcon), despite being a relatively new helicopter, has already been produced in a wide variety of mainly military versions but interest is also increasing in the civil market with Aeroflot already having taken delivery of five examples while 18 have been operated on lease in Spain for firefighting missions. Av at early 1994, total production, excluding prototypes, stood at about 80.

Following the success of its two-seat R22, Robinson used the same basic design to produce an enlarged four-seat helicopter, the R44 which was certified in December 1992. Since then sales have been buoyant and the company expects to increase production up to 150 per year by 1995.

Developed jointly with Kawasaki, Eurocopter's BK 117 is an 8-11 seat twin turboshaft multi-purpose helicopter. First flown on June 13,1979, the type was certified in Germany and Japan in December 1982 and the USA in March 1983. In addition to Eurocopter and Kawasaki production, the type is also built under licence by IPTN in Indonesia and in South Korea by Hyundai Precision Industry. 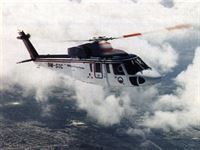 Malaysian Helicopter Services (MHS) took delivery of six Sikorsky S-76Cs between September 1991 and September 1992 and is currently the largest operator of these 12-seat helicopters. MHS was also the first to use the C-model in the offshore oil support role, although earlier variants have already been used for many years for this purpose.

Robinson's remarkably successful R22 is exemplified here by an example of the latest Beta model operated by Sloane Helicopters at Sywell, UK. Sloane are UK distributors for the type, which has proved extremely popular in the UK where early production sales were even greater than in the USA. There are currently over 320 R22s registered in the UK, more than three times more than any other helicopter.

Latest offering from the Eurocopter stable is the EC 135, the prototype D-HECX being seen here during its first flight on February 15, 1994. Although based on the BO 108, significant changes included an extended fuselage and provision of an advanced shrouded fenestron in place of the conventional tail rotor. A second prototype flew on April 16 and the type is intended as a replacement for the BO 105. Test flying is now underway with planned certification in 1996.

A McDonnell Douglas MD 520N emphasises one of the advantages of the NOTAR concept - there is no danger of a tail rotor strike when flying close to any kind of obstacle. Orders and options for the type stood at over 200 in early 1994, of which 60 had already been delivered.

Initially flown as the Enstrom 280FX, in December 1988, the definitive wide-cabin, four-seat Enstrom TH-28 flew in October 1989 and after failing to win the US Army's New Training Helicopter contract was launched onto the civil market as the Enstrom 480. The helicopter is offered in three, four or five-seat configuration, or alternatively as a single seater for cargo carrying.

Kaman's single-pilot ‘Aerial Truck’, the K-1200 K-MAX, is uniquely designed specifically as an external lift helicopter with the lowest possible operating costs coupled with the highest level of safety and reliability. It is seen here during altitude testing at Leadville. Colorado, with an underslung Bambi bucket forest firefighting system. The helicopter operated for more than 30 hours during these tests at altitudes of between 12,000 and 15.000ft, lifting up to 2,300kg, without the need for any significant maintenance.

Having failed to win the US Army's New Training Helicopter contract, the Schweizer 330 is now being actively marketed for training civilian pilots. The example here is operated by Scandinavian distributors for the type, Saab Helikopter, seen during a visit to CSE Aviation, the UK agents. Certification in the UK is expected shortly.