A 15ft torpedo drops away from Plt Off Monks' Dart, N9797, off Gosport in 1926. The Isle of Wight is visible on the horizon to the left. Despite its large size for a single-seater, the Dart was a pleasant aeroplane to fly, and its 38kt landing speed made carrier landings easy. 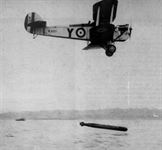 Plt Off Monk, piloting Blackburn T.2 Dart torpedo bomber N9717, makes an experimental torpedo drop at Gosport on August 22, 1927. Virtually a re-rigged, reduced-span version of its predecessor, the Swift, the Dart was powered by the Napier Lion of 450-465 h.p.

Pg Off Monk (promoted!) releases a dummy 15ft torpedo from Dart N9552 at Gosport in October 1927. Although the Dart had no guns, the torpedo, which weighed about 1,500lb, could be replaced by an underwing bomb load, the largest load in this form being a pair of 520-pounders. The bomb racks can be seen in this photograph.

Left: N9552 again, this time dropping a dummy 12ft torpedo off Gosport in November 1927. The caption states that Fg Off Monk was with 465 Flight at this time. Dart N9552 was flown to Gosport via Northolt on February 22, 1923, piloted by Fg Off Harrison, so it obviously enjoyed a long and active life.
Right: Our old friend N9552 again, with Monk in charge. As noted previously, the fuselage markings suggest that this picture was taken about 1928. A notable addition is the complex aerial array stretched between the rudder and wing trailing edges, just inboard of the ailerons. 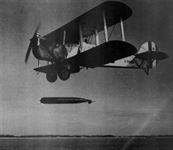 Plt off Monk drops a dummy 15ft torpedo into the Solent off Gosport on September 27, 1926. This time his mount is Dart N9689, which was reconditioned in 1924 and redelivered from the company's Brough airfield to Farnborough, en route to Gosport, on October 31 that year.

Fg Off Monk touches down on HMS Courageous, off the Isle of Wight, in 1928. This Dart may well be N9552 again. Note the deckhands preparing to meet the aircraft. At this period no arrester system other than manpower was in use by the FAA. The Dart's jury struts for wing folding are already in position at the wing roots.

Plt Off Monk poses in front of a Dart at Gosport in 1926.