An important series of test flights flown by the Advanced Fighter Technology Integration F-16 (AFTI/F-16) was conducted during 1982 to demonstrate triplex-digital FBW, updated displays and integrated weapons/fire/control systems. Note the two moveable canards and modified dorsal fairing for test instrumentation. The aircraft has been modified several times for different testing phases since the trials in 1982 and is based at Edwards AFB.

Two generations of stealthy air vehicles meet in a rare pairing of two unique aircraft as a YF-22A accompanies another Lockheed triumph, the F-117A. 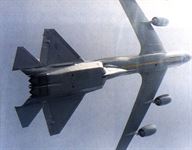 As with the F-117A, radar reflections from panels and doors have been dissipated by the use of serrated edges. This is particularly apparent at the fuselage/engine nozzle junction and weapons bay.

Close coupled wing and horizontal tail surfaces posed a problem for stealth-conscious designers but reflections were minimised by aligning the tail with wing sweep angles.

Posing for the camera, this view of the second YF-22A illustrates the large fin/rudder area. Such large surfaces were necessary to ensure positive handling and high agility. 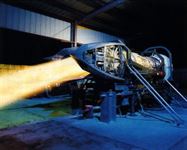 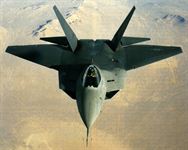 The broad plan of the upper fuselage/wing interface carries top decking for the engine air intakes and S-ducts to the engine.

Pursued by the aircraft it is designed to replace, the YF-22A lifts off with flaps down and leading edge devices deployed. Note the narrow nose leg retraction space.

The in-flight refuelling point on the YF-22A is located at approximately mid-length with the receptacle covered by a sliding door. Note the vortices shed off the wing tips due to the high weight and low speed.

Pilot visibility is good on the YF-22A but changes to the production model will put the pilot further forward and place the intakes slightly aft, increasing the visual circumference.

As with the F-117A, radar reflections from panels and doors have been dissipated by the use of serrated edges. This is particularly apparent at the fuselage/engine nozzle junction and weapons bay.

Two generations of stealthy air vehicles meet in a rare pairing of two unique aircraft as a YF-22A accompanies another Lockheed triumph, the F-117A.

In searching for enhanced cockpit aids for use with the superfighter, Air Force Aerospace Medical Laboratory technicians developed a helmet containing a three-dimensional panoramic display incorporating miniaturised electronics and optics that relay images to the pilot's eyes. 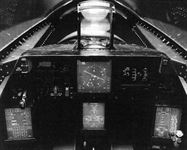 Cockpit information is presented through five multi-function liquid crystal displays. This photograph shows the cockpit of the second YF-22A; primary screens of production aircraft will display tactical information, whilst the secondary screens will provide systems data.

The damaged YF-22A hack on its undercarriage after a belly flop following pilot-induced-oscillations during a fly-through on April 25, 1992.

As a result of wind tunnel and flight test analysis, the EMD F-22 configuration has been refined: the length being reduced, wing span increased and wing and tailplane plan forms changed. Lockheed Aeronautical Systems has completed some 15,300 of a planned 17,000 test hours for the refined configuration. (Photo,

Detail design of the structural modifications to the Boeing 757 Avionics Flying Laboratory is under way and the first flight is scheduled for 1998. Extensive modifications to the 757 include the installation of an F-22 forward fuselage, wing-like structure and unique electrical power, liquid cooling and instrumentation systems.