The West German Army Aviation element, the Heersflieger, hot formed in 1957, its first three units being formed at Niedermendig with US assistance. An early addition to the newly-formed army aviation corps was the Piasecki H-21C Shawnee which was used for troop transport. Seen here in 1961 is 'QF-462', an H-21C from Heersfleigerstaffel 207.

Widely used by the US Army, with which it became the standard transport helicopter in the late 1950s, the Sikorsky H-34 also achieved considerable export success - seen here is German Heersflieger example QK-584 from Heersfleigerstaffel 307.

The Hiller UH-12/OH-23 Raven was one of many rotary-wing types to enter US Army service in the 1950s - it also saw service with several overseas military operators. This early example. 157/'ABB', was one of a number to enter service with the French Aviation Legere de l’Armee de Terre (ALAT), which was initially formed in 1954. 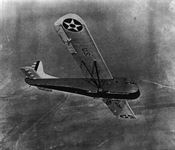 The most widely used assault glider by the US Army during World War Two was the Waco CG-4 which became the US Army Air Corps standard cargo glider, used in all theatres of war worldwide. Capable of carrying either 15 troops or one Jeep and crew, the CG-4 could easily be loaded/unloaded via the front, as the entire nose section, complete with cockpit, could be swung upwards to give clear access. An incredible 13,900 CG-4s were built, with a large number going to Europe to take part in most of the major glider assaults of the War, and the type also saw RAF service as the Hadrian.

A pair of General Aircraft GAL.48 Hotspur II gliders bank sharply as they descend towards the landing zone during a training flight. The eight-seat Hotspur was the first military glider built by the Allies, making its first flight on November 5, 1940. Although intended as an expendable assault glider, as far as is known, the Hotspur never made any operational flights and instead became the primary operational training glider for the Glider Pilot Regiment. A total of around 1,000 were built.
Another view of Hotspur II BT551 on a training flight in 1942. The 45ft 10 3/4 in-span aircraft had a gliding speed of 90m.p.h. and a landing speed of 56 m.p.h.

The first nine Bell YR-13As for the US Army, together with four Bell HTL-1s for the USN, lined up prior to hand-over at Bell Aircraft Corporation's Niagara Falls plant in Buffalo, New York, on April 11, 1947 - at the time this was the largest ever single delivery of rotary-winged aircraft. Based on the civil Model 47A, these were the first of thousands eventually produced, mostly for military applications. The early faired-in tail boom seen here was dispensed with on subsequent models in favour of the now familiar open lattice boom structure.

Originally designed by Cierva as the W.14 Skeeter and first flown in 1948, the entry into service of this helicopter with the Army Air Corps (AAC) was not to be until ten years later - after development had been taken over by Saunders-Roe. Some 65 SaRo Skeeter AOP.12s joined the AAC - XL814, seen here, is currently maintained in airworthy condition by the AAC Historic Flight at Middle Wallop, and three others are flying with private owners in the UK.

US Army/8th Transportation Company CH-37B Mojave 55-0617 seen in the early 1960s. The ungainly-looking CH-37 twin-engined transport helicopter featured large clamshell nose doors below the cockpit for cargo loading. It entered service with the US Army in 1958.

The Mil Design Bureau's first foray into helicopters proved a great success. First flown as the GM-1 in 1948, this three-seat helicopter went into production as the Mi-1. Although manufacture tapered off after several hundreds had been built, from 1954 it was also produced in Poland as the SM-1 until 1965. by which time over 1,700 had been constructed. This Soviet example was, remarkably, still going strong in 1973 when it was one of two which visited Middle Wallop, UK, for the World Helicopter Championships.

One of many types evaluated by the US Army during the 1950s, McDonnell XV-1 53-4016 was a so-called 'convertiplane' designed to carry three passengers, or two stretcher patients and medical attendant, in addition to the pilot. Power came from a 550hp Continental piston engine driving a pusher propeller for forward flight or driving a compressor to supply air to rotor tip jets for vertical flight. It made its first transition from vertical to horizontal flight on April 29, 1955, but after trials no orders were placed and it did not progress past the prototype stage.

Avro Type 671 Rota 1 (licence-built Cierva C.30A) K4230/'15' was one of 12 of these autogyros built for the RAF’s School of Army Co-operation at Old Sarum in 1934/5. Although an RAF unit, as its name implies, it was formed to provide aerial support for the British Army and continued to operate and evaluate the type into World War Two, when a number of civilian autogyros were also impressed into the RAF.

The Auster was the backbone of the RAF Army Co-operation Squadrons during World War Two and throughout the 1950s. This example, MT105, was built as an AOP.III but is seen here after being temporarily converted to Mk II standard with a Lycoming engine. In 1944/45 it was one of many transferred to the Royal Australian Air Force, as the RAF reequipped with later models.

The General Aircraft Hamilcar was the largest glider built by the Allies during World War Two and the only one which actually carried an armoured vehicle. It was designed to carry either a light tank or two Universal (Bren) carriers and similar-sized loads, with the entire nose hinging sideways to allow access to the cargo compartment. This Mk X was one of around 22 fitted with two Bristol Mercury 30 engines to assist take-off and towed flight, although it could also fly normally under its own power for ferrying without cargo. In the event, the powered version was not used operationally. Seen here is the prototype Mk X while under test.

Beech L-23A Seminole 52-6164 was the third production example from the initial batch of 55 ordered by the US Army - a further 125 L-23Bs and 'Cs were subsequently acquired and the type became the standard US Army communications and liaison type during the 1950s and beyond.

Edgar Percival EP.9 XM797 seen in 1958 when it was one of two being evaluated by the Army Air Corps. Although the aircraft underwent several years of trials, in 1961 they were returned to the manufacturer and no orders were placed.

Hiller YH-32 Hornet 55-4963 was the first of 12 of these ramjet-driven, two-seat ultralight helicopters ordered by the US Army - one of the smallest manned types it ever operated.