The first Israeli Spitfire, D-130, with Canadian engineer David Panar briefing a pilot in the cockpit. As not all of the instruments were available some spots in the instrument panel were left empty! 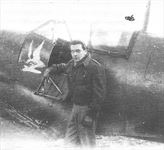 Caeser Morton Dangott and his Spitfire at Yugoslavia in December 1948. The badge under the cockpit was a stork carrying a Spitfire and it was the badge of Operation ‘Velveta’ 2 but not the badge of an IDF/AF squadron as was later alleged.

Pilot Aaron ‘Red’ Finkel with his Spitfire at Yugoslavia in December 1948.

David Panar, right, and Joe Schmeltz congratulate each other after the successful first flight of D-130. 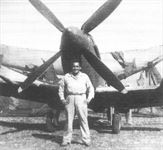 'Bill' Pomerantz pose in front of a Spitfire at Hertzeliya circa October 1948.

‘Dani’ Shapira (top) and ‘Moti’ Hod pose with a Spitfire at Niksic in December 1948.

Знаменитый "Спитфайр" (борт D-130), собранный израильскими умельцами из деталей списанных машин
D-130 on the morning of its first flight, July 23,1948 with Canadian engineer David Panar standing on the port wing, briefing the pilot in the cockpit (Senior?) while Ezer Weizman is standing just to the starboard of the cockpit. Note the different colours of the fuselage and the engine cowling which were probably mater together from the remains of two Spitfires. It is therefore amazing that the aircraft flew 'hands off' without any trim adjustment!

D-130 under Eucalyptus trees at Ma’abarot with open ammunition doors underneath its wings.