The works team that built the MB 2 fighter prototype probably immediately following completion in July 1938. At that early stage the MB 2 had no fixed fin or rudder area projecting above the line of the rear fuselage.

MB 2 at the intermediate stage at which the sole prototype embodied a small vertical fin.

Purposeful gait of the MB 2 in evidence. Note extended crash-post protruding from the cockpit. 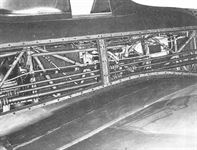 Typical design accessibility in a Martin-Baker aeroplane was via many large detachable panels. In this picture alone there are no fewer than 46 positions for Dzus fasteners.

The starboard main undercarriage appears to be completing its retraction sequence on the startling-looking MB.5.
In its final form, the M.B.5 had an enlarged tailplane, as well as the larger fin and rudder. In this view, the main wheels are just being retracted and can be seen under the wing ahead of the radiator intake.

MB.5, with convenient figure providing scale, makes plain its direct lineal origins in the MB 3. The canopy is now of tear-drop type and much further forward than on MB 3 while the powerplant is the Rolls-Royce Griffon 83. 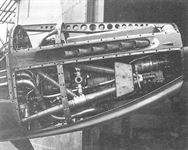 MB.5; visible is the starboard ‘A’ frame engine bearer in molybdenum steel tube which with its partner on the port side took all the loads in the Rolls-Royce Griffon installation

Newly out of the experimental shop at Denham, the one and only MB.3 already sports what purports to be six cannon. 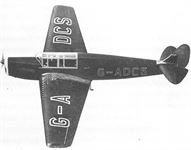 The Martin-patented system of tubular steel construction was first used in the single MB.1 seen here flying in the summer of 1935. 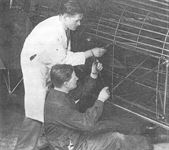 Before the fabric went on, Eric Stevens and Jim Clampitt show off the first applications of Martin’s structure in the MB.1. Its characteristics of ease in manufacture, high structural rigidity and the enormous benefits to be derived from design for maintenance and routine replenishment (armament for instance) cried out for an application more ambitious than a light aeroplane. 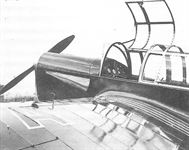 An indication of wing-fold geometry, cockpit hooding and tandem seating for two.

View showing well the ‘V’ windscreen in side view, the fin fillet, the long exhaust (later revised) and the rather stalky undercarriage. 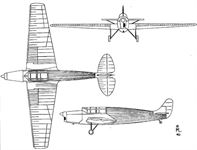 James Martin’s engineering genius was transformed into the pioneering work that has made the company’s name almost a generic term for the finest in ejection seat escape systems.