The EAF had made considerable use of dummy aircraft since before the Suez War of 1956, and perhaps even earlier. An example, found at a Sinai air base in 1967, represents a MiG-15 and appears to have been dropped from sufficient height to break its undercarriage and wing roots, perhaps as a result of a bomb blast. Tahir Zaki's decoys at Kibrit were similarly made of wood by carpenters from Suez, but represented MiG-17s.

The UARAF/EAF is believed to have purchased MiG-17Fs from more than one Eastern Bloc source, though the majority were built in the Soviet Union. The example illustrated probably formed part of 5 Squadron, 20th Air Regiment, based in Sinai and the Canal Zone in June 1967. It is basically a standard late version of the MiG-17F with an SRD-1M ranging radar on the top of its nose and Syrena 2 air warning radar between the two parts of its rudder. But it has been given Egyptian-designed and manufactured rocketrails beneath the wings, and its colour scheme is more elaborate than most Egyptian MiGs of this period. It might have formed part of the UARAF's aerobatic team. It is known that a few years earlier its MiG-15s had red and white chequered rudders.

The launch-rails for unguided rockets which were fitted to some MiG-17s before the June 1967 war (and to almost all of them afterwards), clearly shown on an Egyptian aircraft preserved outside the 1973 Panorama Museum in Cairo. They were developed by Colonel Zakaria's team of technicians at the Egyptian Air Force engineering and technical institute at Helwan, originally to launch Oerlikon rockets, but subsequently Egyptian-built Saqr rockets 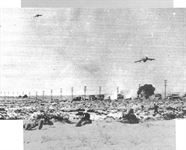 МиГ-17 наносят штурмовой удар по израильской автоколонне во время очередной арабо-израильской войны
A pair of Egyptian MiG-17s attack an Israeli column in northern Sinai on June 8, 1967, the fourth day of the so-called Six Day War. Several MiG-17s and a larger number of pilots from Kibrit went to Abu Suwayr on the second day, from where they and others carried out numerous air attacks against the Israeli invaders

The condition of Moustafa Hafez's aircraft is even clearer in this picture. The lower part of the rudder had mostly been shot away, and the main control rod to the stabiliser badly damaged. A rather less battered MIG-17F (serial number 2606) can be seen in the background.

The condition of Moustafa Hafez's aircraft is even clearer in this picture. The lower part of the rudder had mostly been shot away, and the main control rod to the stabiliser badly damaged. A rather less battered MIG-17F (serial number 2606) can be seen in the background.

The MiG-17PF flown by Captain Moustafa Hafez on June 5, 1967 is seen here under repair at Kibrit after the war. Its wings, elevator and upper fin have been removed. The Arabic serial number 2803 can be seen beneath the cockpit while the squadron crest is closer to the air-intake

The battered right wing of Captain Hafez's aircraft, removed for repair, showing the damaged right aileron. As a result, the pilot could not stop turning to the right and was only able to straighten up for a landing by using the aileron trims. The two narrow and one broader black wingtip bands carried by all Egyptian fighters can also be seen.