"Спитфайр" VB, переданный советским представителям 11 января 1943г. предположительно в состав 57-го гиап
Spitfire VB EP210 '538' in the markings of a Guards unit - note the Guards emblem on the fin. Judging by the fact that the Spitfire still carries its RAF serial and the black-outlined red star as applied by the British (both looking fairly fresh), this seems to be an early photo, probably from the 57th Guards Fighter Air Regiment (57 GIAP) which used the type between February and June 1943 during the fighting in the Kuban Peninsula.

The last PR.IV used in the USSR until 1946 (the appearance of the machine is based on written description, no photographs being available). Note the name 'Mable' in Latin characters (often mis-spelled in Russian publications) which must have dated back to its RAF service. In 1944, this Spitfire was flown in the 3rd Squadron of the 118th Independent Reconnaissance Aviation Regiment, among others by Yosif Andreyevich Platonov. In 1946, it went to the museum of the Soviet Northern Fleet in Murmansk, the only complete PR.IV ever to be placed in a museum! Is there anyone among the RAF veterans of the Soviet operations who can identify the Spitfire called 'Mable'?

Central section of the fuselage of the Spitfire. The hatch over the oblique camera shows traces of modification, while the windscreen seems a genuine PR Spitfire type

The camera system of the Spitfire as removed for testing

Merlin 46 installation of the Spitfire tested at the NII VVS.

Head-on view of the centre section. The standard under-nose oil tank is visible. Note the non-standard elements of unknown function on the bottom of the oil cooler

Front starboard view of the Spitfire. The quality is very poor, and Russian typescript of the test report is showing through, but the small star on the engine cowling stands out clearly.

"Спитфайр" PR IV
Port view of the Spitfire PR.IV tested at the NII VVS in late 1942/early 1943. Note the small star on the engine cowling, in addition to those on the side of the fuselage and on the fin/rudder. 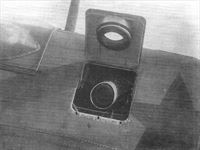 Close-up of the central section of the fuselage with the camera hatch open. Note the PR-style blisters on the hood. The star does not look very regular

Enlarged part of the central section - note the serial AB132 applied with white paint on the oblique camera lens tubing.

"Спитфайр" PR.IV, 118-й орап ВВС Северного флота
Rear port view of the Spitfire PR.IV during tests at the NII VVS. Note that overpainted areas where RAF roundels were painted are prominent on wings, but not on the fuselage

Two views of a portion of the port wing and the bent propeller of a Soviet PR.IV, displayed at the aeronautical museum at Bodo in Norway. Note the remains of a red star, and several different hues of blue and green noticeable on the bottom of the wing.