Marking a radical departure from Junkers’ patented corrugated Duralumin skin concept, the K 47/A 48 was initially built with a completely smooth skin, although old habits die hard, and production versions incorporated corrugated sections. This A 48, D-2012, was used by the DVL for trials at Berlin-Adlershof from 1930.

In stark contrast to Junkers’ traditional square-angled corrugated skin, the K 47 prototype was given a much more elegant and streamlined smooth skin throughout, although the wings and the tail surfaces of production machines incorporated corrugated skins. Note the original bracing wires linking the wings to the undercarriage cradle and to the pylon between the cockpits.

Был построен только один экземпляр A 48dy, регистрационный номер D-2012, оснащенный двигателем Siemens Sh20 мощностью 540 л. с. (402 кВт). В июне 1931 эта машина проходила испытания в экспериментальном центре Адлерсхоф в Берлине.
The A 48 was the “civil” variant of the military K 47, although they were essentially the same aircraft, the A 48 merely being unarmed and with new fuselage decking added around the rear cockpit. This example, D-2012 (c/n 3365), was delivered to the DVL as a test machine in June 1930.

The unusual prospect of a Junkers fighter in the six o’clock position! The K 47 was initially fitted with a twin-finned tail, in order to provide a good field of fire for the rear gunner, but a pair of forward-firing machineguns was also fitted, with a synchronisation gear to fire through the propeller arc.

Seen here fitted with a BMW Hornet A-2 engine, A 48 c/n 3362 started its career at the German test centre at Lipetsk in the Soviet Union in June 1930. It was later registered as D-1057, before another spell at Lipetsk and its final return to Germany as D-INUT, as which it was used by the Deutsche Verkehrsflieger-Schule (DVS - German Air Traffic Pilots’ School) as a trainer at Schleissheim.

Six BMW Hornet-engined K 47s were ordered by the Nanking government in China in May 1931, which, with the purchase of the example sent the previous year, were given the serials P-1 to P-7, the last of which is seen here.

Despite being completely obsolete by the mid to late 1930s, at least three examples of the A 48/K 47 survived into the 1940s and received Luftwaffe Balkenkreuz markings and codes, as seen on this BMW Hornet-engined example. The type’s designer, Hermann Pohlmann, refined the dive-bomber with his famous Ju 87 Stuka. 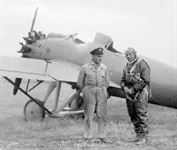 Junkers test pilot Johann Riszticz (right) beside the first of the Nanking government’s K 47s, which arrived in October 1930.

With a Townend-type ring-cowling fitted to its BMW Hornet engine, A 48 demonstration and trials machine D-2284 (c/n 3355) displays its underwing-mounted divebrakes. With its sturdy construction and good handling characteristics, the type proved valuable for research into the nascent art of dive-bombing.

Seen here completely without markings before delivery, A 48 SE-ACT (c/n 3371) was one of three acquired in 1931 for use at the Erprobungsstelle testing station at Travemiinde, although this was the only one of the trio fitted with a single fin and revised tailplane, which incorporated control surfaces of corrugated construction

Originally registered as S-80, then S-AABW, and finally SE-ABW, the much-travelled prototype is seen here with underwing struts replacing the original bracing wires, and the specially designed suspended gun mounting in the rear cockpit, which enabled the rear gunner to operate the Madsen machine-gun while seated.

With the retirement of SE-ABW as a demonstration machine, fourth production K 47 SE-ACF (c/n 3355) was used for sales tours to Turkey and Portugal in 1930. Neither, however, placed orders for the type. Note the distinctive corrugated tail-section surfaces.

The original Stuka? Hornet-engined development K 47/A 48 SE-ADL (c/n 3356) was equipped for dive-bombing trials at Bofors’ shooting range in Sweden with underwing bomb-racks provided by Finland’s llmavoimat and measuring equipment, as seen here on the undercarriage struts.

German flying instructors Erich Brammen (fifth from left) and Hermann Frommherz (second from right) enjoy a pause in activities during the training of Chinese K 47 pilots in late 1931. The Chinese K 47s sported the Nationalist roundel, based on the Kuomintang’s symbol incorporating a white sun with 12 cantons on a “blue sky” field, with a red outer ring.

Three Chinese K 47s await their next sortie, including, nearest the camera, demonstrator c/n 3356, originally SE-ADL. This was acquired and donated to the Nationalist Air Force by the T’ien C’hu Seasoning Powder Factory, whose name was painted on the fuselage aft of the rear cockpit, as seen here.

Fitted with a Bristol Jupiter VII engine, A 48 D-2284 (formerly demonstrator SE-ACF) is seen here during the 1932 election campaigns for the Nationalsozialistische Deutsche Arbeiterpartei (Nazi Party), during which it wore swastikas on the undersurfaces of the outer wing sections. These were only temporary markings, however.

This original Junkers three-view drawing, entitled Dimensions and Designations, is dated February 1930, and shows the leading particulars of the twin-finned Jupiter-engined A 48 b.