Lynx 21A, N-4007, is one of nine new-build Brazilian Mk 21As. The Brazilian Super Lynxes are thought to have been the first with Westland's new bolted main rotor head, which raised the helicopter’s maximum all-up weight and was subsequently used on all new-build aircraft. 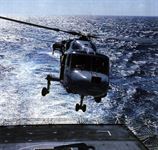 By using up to 3,000lb of downward thrust, the Lynx rotor system helps to ‘stick’ the Lynx to the deck of a rolling ship, even where no deck lock grid is available.

Thanks to its innovative forged titanium rotor hub and semi-rigid rotor, the Lynx enjoys a manoeuvrability few other helicopters can emulate.

Installed in the Lynx airframe, the T800 dramatically increases twin and single engine performance, especially in hot climates, such as in the Middle East and parts of Asia, where the Lynx had a number of potential customers.

Westland Helicopters' long-serving Lynx demonstrator served as the prototype for the new T800 engine installation, with a pair of 1,350shp (1,007kW) T800 engines. As can be seen from the logo proudly displayed on the nose of the aircraft, the Lynx set a world speed record, achieving a speed of 216kts.

Malaysia is the first confirmed customer for the Super Lynx 300, placing an order for six Sea Skua-armed Super Lynxes in September, 1999. The Srs 300 is the first Lynx to be equipped with a full glass cockpit.

Although not referred to as Super Lynxes, the Royal Navy’s Lynx HMA.8 helicopters are to Super Lynx standards. This HMA.8 carried out trials last year on board QinetiQ's Triton trimaran demonstrator.

This view of HAS.8 ZD267 emphasises the nose-mounted Passive Identification Device and chin-radome. ZD267 began life as a HAS.3 and subsequently had the major HAS.8 modifications except for structural strengthening, composite main rotor blades and reverse direction tail rotor, becoming a HAS.3(Mod). In late 1991, '267 was removed from the test programme and was converted to HAS.8 standard by May 1992. It is seen here at RNAS Portland in March 1993.

Brazil became the third customer for Super Lynx in 1994, contracting for nine new-build Super Lynx and the upgrading to Super Lynx of its remaining fleet of Lynx. 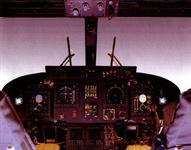 The glass cockpit fitted to the Malaysian Super Lynx 300.