Removing some 24 Tranche 1 Typhoons from service will make the force less resilient, and will make it much harder to sustain seven frontline squadrons. The Tranche 1 aircraft currently fly adversary training and air defence missions - a cheap upgrade could widen the scope of their capabilities 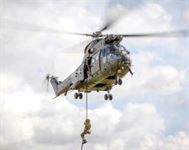 The A400M will have to fly morning, noon and night if it is to plug the gap left by the retirement of the Hercules.

The C-130J has been a virtually constant fixture on Operation Shader, and the 14 aircraft force has consistently flown the same number of hours as the larger A400M fleet. Here a C-130J runs up at RAF Akrotiri, prior to a mission

The RAF's C-130J Hercules are reaching their sunset somewhat earlier than planned. Their loss represents a reduction of nearly a third of the RAF’s transport fleet, and most of its tactical and special forces capabilities

The RAF allowed its fleet of E-3Ds to become obsolete and unavailable by not investing in necessary upgrades. Retirement of the E-3D had become inevitable, but there will be a three-year capability gap before three E-7A Wedgetails enter service

Capping the F-35B buy at, or close to, 48 aircraft would represent a reduction of 90 aircraft from the original planned order. It will leave the Royal Navy carriers dependent upon the USMC to augment the UK F-35Bs if they are to carry a meaningful air wing. During Groupex, HMS 'Queen Elizabeth' embarked just five RAF F-35Bs, and ten from the US Marine Corps.

The review contained some good news for the Future Combat Air System, confirming £2bn of funding over the next four years, allowing the programme to move to the concept and evaluation phase