A de Havilland (Canada) Beaver owned by the Royal Australian Air Force, which is accompanying the 1955 Australian Antarctic Expedition.

A North American FJ-4 Fury in the new colour scheme. The new scheme, gull-grey at wing-root level and above, and white below, extends the length of the fuselage.

A Ford-based Fairey Firefly T.T.Mk 4. The M.L. winch under the fuselage is operated by the airstream through the small propellor on the nose. 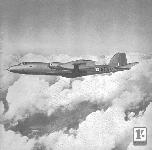 English Electric Canberra B.Mk.6s will soon be joining R.A.F. Squadrons as night interdictors, preceding the B.Mk.8. This B.6 is fully modified for such duties with a gun pack under the fuselage and underwing bombs.

CANBERRA PR.9. First flown on 8th July 1955 the Canberra PR.9 is intended to operate at heights "well above the ceiling of present-day fighters" . It is expected that it will be used in conjunction with the "V" bombers. The PR.9 has already been ordered in quantity for the R.A.F. and is going into production at the English Electric Co.s works at Preston. Wing span has been increased, as has chord inboard of the engines. The prototype PR.9 has standard PR.7 canopy, but production aircraft will have the fighter-type canopy of the B.Mk.8. Up-rated Avons are fitted.
Salient features: Having the unmistakable slim fuselage of earlier Canberra marks, with the unpanelled PR nose, the Mk.9 has an unusual wing planform. The inboard sections now extend rearwards to the jet efluxes, which with the higher aspect ratio of the outboard sections gives a less sharply tapered appearance to the whole trailing edge. Wingtips are now square-cut and the auxiliary tanks, previously under the wingtips are now slung inboard. The Avons appear to have larger-diameter intakes, and the starter "bullets" are less prominent than hitherto. The broad tailplane with dihedral and square-cut fin remain the same, as does the undercarriage with main legs retracting inwards into the wing and the nosewheel backwards.

DASSAULT SUPER-MYSTERE 4B1. First flown on 2nd March 1955 the Mystere 4B1 is the first of the Dassault Mystere family to be supersonic in level flight. It seems that the 4B1 with its 45-degree swept wing, is the machine previously known as the Mystere 20. The prototype is powered by an Avon RA.7R, but the production batch of 200 will have the SNECMA Atar 101G with reheat. An initial prototype-pre-production batch of five Mystere 4B1s is now under construction.
Salient features: Gradually the tubby characteristics of the Ouragan and the Mystere 2 have been lost on the latest Mysteres. On the 4B1 the nose is much longer and the intake flattened. The cockpit seems to blend better into the fuselage and this effect is heightened by the long dorsal spine. The tailpipe extends beyond the base of the rudder as on the Mystere 4B. The wing, in the low-mid position, is sharply swept with trailing-edge root fillets and blunt tips. The fin, of generous area, has very sharp sweep on the leading edge, and the swept, square-cut tailplane is set just above the fuselage-top line. Main undercarriage legs retract inwards into the wings and the nosewheel backwards.

The Proteus engine, which powers the Britannia airliner, was the first high-power turboprop in the world to be officially cleared for use in passenger-carrying aircraft.

The Vickers Valiant is powered by ROLLS-ROYCE AVON ENGINES

Mr. Beverly Howard, President of the Hawthorne School of Aeronautics, with one of the few Bucker Jungmeisters in the United States.

SIPA 1000 COCCINELLE. Intended as a really cheap light aeroplane (although in its "utility" form it will cost ?1,300) for club and touring use, the S-1000 Coccinelle was designed and built in a remarkably short time, and was publicly displayed at the Paris Salon in June. A production line for the Coccinelle has already been laid down. Basically, the aircraft will be offered with a 65-h .p. engine without electrics, or in "de-Iuxe" form with a 90-h.p. engine and an electric starter.
Salient features: Of small dimensions, the SIPA-1000 has a blunt nose, with characteristic horizontally-opposed engine intake. The transparent cockpit cover is large with a gentle slope-down at the back. The fuselage is flat-bottomed with marked upsweep towards the tail. The thick constant-chord wing has dihedral from the roots and blunt tips. Fin leading-edge is straight while the rudder trailing edge is curved. The tailplane has curved tips with the elevator well aft of the rudder line. Cantilever main undercarriage legs are slanted outwards and the nosewheel forwards. A small tail "hoop" skid is fitted.

The first prototype Short S.A.4 Sperrin, VX158, is now flight-testing a DH. Gyron in the lower port engine nacelle . Another Gyron will later be fitted in the starboard nacelle. All-up weight of the Sperrin with the normal four Avons is 115,000 lb .

A Meteor Mk.8 with Mk.7-type canopy modified for ejection-seat tests to allow ejections from the back seat. It is used by Martin-Baker and was demonstrated at Ford recently.