Mosquito N9911F photographed on its way to America 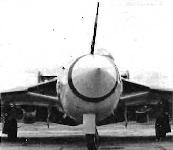 NEEDLE NOSES. To test the "needle sharp" pointed radome for the production de Havilland D.H.110 Mk. 20X a D.H.113 Vampire NF. Mk. 10 was modified accordingly. The resulting shape was then adapted to the D.H.110 Mk. 20X (photo). Because this front view was taken slightly to starboard, the nose of the Mk. 20X appears to be asymmetrical, an illusion which is further enhanced by the offset-to-starboard pilot's canopy. The nose probe is used for test purposes and will not appear on production D.H.110s which will shortly enter service with the Fleet Air Arm.

This Sopwith Camel "Happy Hawkins" must have been a colourful sight with its gaudily decorated wings and fuselage.

MARCEL DASSAULT ETENDARD IV. First flown on 24th July, the Etendard is a single-seat ground support attack-fighter. Powered by a 7,716-lb. s.t. Atar 101E-3 turbojet, the Etendard mounts two 30-mm. D.E.F.A. cannon, one in each of the side air intakes. Like the Supermarine Type 544 (N.113) the Etendard employs leading-edge flaps (drooping slats). The Etendard IV will be evaluated both by NATO and the French Air Force.

CESSNA 319A. First photo to be released of the Office of Naval Research Boundary Layer Control (wing) version of the Cessna OE-2. 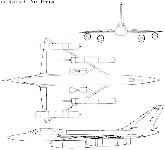 CONVAIR XB-58 HUSTLER. The U.S.A.F. Strategic Air Force is in two minds as to whether or not the three-seat XB-58-CF Hustler will answer its requirements as a "replacement" (or the B-47 Stratojet. Like the Mosquito of World War II, the idea is that the Hustler should be too fast to intercept. No performance figures or other data have been released, but it is estimated that the Hustler has a design limit of Mach 1.8 or nearly 1,200 m.p.h. This delta-wing bomber will have a special streamlined pannier under the centre-section which will carry not only the "nuclear device" but additional fuel as well. First flight trials were scheduled to commence in November at Edwards A.F.B., California.

Intermediate form of straight-sided cross used on German aircraft between the time of abandoning Patee Cross and adoption of standardised straight cross.

Fokker D-VII with standard straight-sided cross used from June 1913 until end of World War I.

After being used for the Australian film "Smithy" this Boomerang fighter languishes in a back yard at Blacktown, N.S.W.

BELL 47J RANGER is the commercial development of the U.S. Navy's HUL-1, now in production at the Fort Worth Division. The Ranger has a 5-ft. wide rear seat which comfortably takes three passengers. Powered by a 260-h.p. Lycoming VO-435-21, the Model 47J is the successor to Model 47H Bellarius (U.S. Army H-13H) of November 1954. Maximum speed at sea-level is the same for weights, 1,942 lb. to 2,565 lb., though the rate of climb alters from 1,320 ft./min. to 805 ft./min. The early production Model 47J illustrated (N2464B) is now on a three-months' (17,000 miles) tour of fifteen Central and South American countries. Finished in silver, it is given the name "El Picaflor Plateado" - the Silver Hummingbird.

Photograph depicts one of several Potez 25 reconnaissance biplanes of the French Armee de I'Air which operated in the North African area during World War II. I myself saw and photographed one or two of them. Roughly the equivalent of our own Hawker Hart, the Potez 25 was powered by a 450-h.p. Lorraine motor, although a considerable number also had Renault, Hispano-Suiza and Gnome-Rhone power units. Top speed was about 135 m.p.h. I must however point out that Edku is not in the Western Desert, but well east of Alexandria, in the Delta area of Egypt.

JET PROVOSTS Mk. I and II. These two photographs provide an excellent opportunity for study of some of the basic differences between the Hunting Percival P.84 Jet Provost T. Mk. 1 and T. Mk. 2. The photo shows the latest modifications incorporated on G-23-I, the Class B (temporary) registered T. Mk. 2. These include the new one-piece, curved windshield, the extended spine to the fin fairing and the short-stroke undercarriage.

JET PROVOSTS Mk. I and II. These two photographs provide an excellent opportunity for study of some of the basic differences between the Hunting Percival P.84 Jet Provost T. Mk. 1 and T. Mk. 2. The photo is a rare view of the "civil" demonstrator G-AOBU. The sixth Jet Provost built (G-23-IIs the thirteenth), G-AOBU c/n. HPAL/006) was experimentally fitted with underwing tip tanks.

The Lockheed T2V-1 SeaStar advanced jet-trainer will shortly enter service with the U.S. Navy. This two-seater is powered by a 6,100-lb.s.t. Allison turbojet and has a maximum speed of 600 m.p.h. The T2V-1 is a progressive development of the T-33A Shooting Star (U.S. Navy TV-2).

DOUGLAS SKYLANCER. A logical successor to the F4D-1/2 Skyray is the new XF5D-1 Skylancer, now undergoing advanced flight trials at the military test centre of Edwards A.F.B., California. Fleet deliveries have now commenced with the "bat winged" Skyray to the aircraft carrier U.S.S. Forrestol. The XF5D-1 Skylancer is larger overall and has a longer fuselage than the Skyray, thus allowing for a great range and/or striking capacity.