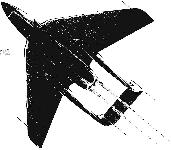 More colour schemes, this time on No. 10 (Naval) Squadron's Camels.

Somewhat after the style of the camouflage applied to the Navy's Dreadnoughts are these variations painted on the wings of Sopwith Camels.

Fitted with two General Electric T-58 turboshaft engines the Vertol H-21D helicopter is now being flight tested. Normal H-21s are powered with a single piston engine. A second turbine-powered H-21D is being used for ground tests.

This Vertol HUP-2 has been made completely amphibious by sealing the fuselage and fitting a pair of floats to the fuselage. Vertol is currently building Model 44 (improved 21s) for the Swedish Navy with amphibious hulls and floats.

Twin Pioneers, G-APHX and 'HY, are now operated in Kuwait by B.I.A.L. on behalf of the Kuwait Oil Co. and are used for survey work and the transport of mining equipment to inaccessible areas.

The Zlin 126 Trener II is used extensively by the Czech Air Force and flying training schools. It is a tandem two-seater powered by a 105-h.p. Walter Minor engine, and has a maximum speed of 127 m.p.h.

Rare photograph showing an Avro 504 of the Finnish Air Force.

A Bristol M.1 fighter of World War I painted overall with feathers is another of the strangely-decorated aircraft of the period.

AERO L-200 MORAVA. The Aero L-200 Morava is the latest aircraft to come from the Czech aviation industry, and follows on the heels of the Super Aero 45, which, like the L-200, was designed by Ladislav Smrcek (formerly of Zlin) and built at the Kumovice factory. Profiting by the latest techniques of Western design and incorporating all the refinements that its possible rivals might have, the L-200 may prove a formidable contender in the world market for twin-engined business aircraft. The low wing is a two-span unit, built entirely of metal, with Frise ailerons with a maximum deflexion of 30 degrees and trailing-edge high-lift flaps, with normal setting of 15 degrees for take-off and 30 degrees for landing. Built into the leading edge is a warm air de-icer system, which discharges through slots near the trailing edge. Fuel tanks on each wingtip feed auxiliary tanks inside the wing, just outboard of the engines, by gravity - tanks to a 6-degree dihedral of the wing - but auxiliary pumps inside the lower tanks may be used as well. Either engine may be fed by any tank. The engines are two Walter Minor III-6 of 160 h.p. each, driving metal fully-feathering variable-pitch V-406 propellers of 6.2 ft. diameter - fluid de-icers are fitted to the blades. The cabin is entered by for ward-opening doors on each side, and has two forward seats and a bench-type seat in the rear measuring 4 ft. 3 in. in width - hardly wide enough to justify the claim that the aircraft is a five-seater, though it is a very roomy four-seater. Full dual control is fitted and there is provision on the instrument panel for complete navigational and blind-flying instrumentation. Either Lear or Radiostal radio-compass can be fitted, and there is a VHT transmitter/receiver with stand-by Sonair HF set. The electrical system is 24 volts with two 600-watt generators. The most unusual feature of the L-200 is the twin tail unit, chosen because the airflow characteristics of the "bubble"-type cabin would have necessitated a tall single fin and rudder. Each rudder is mass-balanced, and all tail control surfaces have twin tabs operated from the cabin. The tricycle undercarriage is retractable; the main wheels are fitted with brakes, and the nose-wheel is steerable with a lock of 60 degrees each side of the centre line.

A number of Lockheed P-38 Lightnings are still airworthy and are engaged on photographic missions in Europe and the Near East. A typical example is EC-ANU, shown here in its ferry markings, EC-WNU.

The prototype Hanworth-built B.K. Swallow, EI-ADS (c/n. 1, ex-G-ACMK), still flies at Weston, near Dublin. It is twenty-four years old and became Irish in June 1947. Now Pobjoy-powered, it first flew with a Salmson radial.

CANADAIR CL-41. Development of a modern side-by-side basic jet trainer, known as the CL-41 or Canadair Trainer, is now under way at the Canadair plant at Montreal. Two flying prototypes of this aircraft, which has been completely designed and developed by Canadair, are now under construction and are scheduled to make their first flights towards the end of this year. It is intended that the CL-41 will take the student pilot from the ab initio through to the basic flight training stages. Some of the aircraft's features are ejection seats with a jettisonable canopy sequenced into the ejection escape system, cabin pressurisation, two blind-flight panels and a "bird-proof" glass windshield. Preliminary design is now under way for the inclusion of an armament pack, not only for training but to give the aircraft a ground-support role. Later planes include the redesigning of the cockpit with seating for four. It could then be used in the communications and light transport roles.
Salient features: A low-wing, twin-seat ab initio trainer powered by a single turbojet engine of about 2,000 lb. thrust. In some respects the CL-41 resembles the Cessna T-37 trainer, now in service with the U.S.A.A.F.

Napier's Eland Convair 340, G-ANVP, being run up prior to take-off from Prestwick on 15th November en route to Santa Monica, California. There it will become N340EL while engaged on C.A.A. airworthiness trials.

Old Avro. This delightful shot of one of Plane Advertising's Lynx-engined Avro 504Ns, G-ACOM (ex-E430), was taken at Ford in 1937, and shows the underwing banner rollers.