Possibly only the second Russian type to visit Farnborough, Antonov An-2 SP-DNP was support aircraft for the Poles 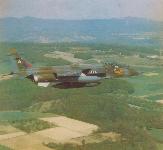 Sepecat Jaguar GR.1 XZ101 of No. 2 Squadron, R.A.F., based at Laarbruch, latest squadron to re-equip with the type in Germany. No. 2 specialises in photo-reconnaissance, while the other Jaguar squadrons have ground-attack as their primary task

Ju52/3m G-BECL, now at Blackbushe with Spanish Air Force code 406-2, is to be repainted in German marks;

В 1970-е годы на вооружение авиации ВМФ СССР поступили СВВП Як-38. Самолет получился не очень удачным - масса полезной нагрузки была небольшой, а аварийность высокой.
The photo, taken by the U.S. Navy in the Mediterranean, "Kiev" is recovering a fighter. These new views show clearly the hatch behind the cockpit with doors below which open when the two lift engines (installed in tandem) are operating. The single vectored-thrust engine (aft) has two nozzles and is the sole propulsion unit for forward flight. VTOL now appears to be the rule with no short take-offs observed so far. A two-seat version is confirmed, the crew being seated in tandem

Britten-Norman Firefighter G-BDHU in action. A new water-bombing version of the Islander, it can drop 176 gal of water in 2.5 sec. and can be equipped with an infra-red sensor to detect incipient forest fires. G-BDHU appeared at Farnborough

Islander G-BDDW/RP-C2146 in the livery of the Philippine Integrated National Police as (c/n.) "463"; 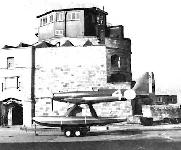 The prototype Dassault Mystere/Falcon 50 trijet, F-WAMD, was rolled out at Bordeaux-Merignac on 4th September and is expected to fly early in November

The first Lockheed JetStar II. N5527L, taking off on its maiden flight at Marietta, Georgia, on 18th August. The aircraft is powered by four 3,700-lb. s.t. Garrett 731-3 turbofans

Boeing YC-14 01873, first of two prototypes built for the U.S.A.F.'s AMST competition, seen during its maiden flight from Seattle on 9th August

Gerry Younger's Pitts S-1, CF-TRH, at Redhill 10/8/76 after its return from the World Aerobatic Championships at Kiev;

Miles Student G-APLK at Strathallan where it was flown by Duncan McIntosh ol Loganair during the Strathallan Aircraft Collection's annual air day on 17th July. It is reported that there has been a revival of interest in this economical jet trainer, which might be put into production if suitable orders are forthcoming

A scintillating aerobatic display was put on each day by one of the two F.F.A. AS.202/18A Bravos

Ag-Cat G-BDZF, shown at Wickenby 22/7/76, is the first British registered G.164B with 7 ft. increase in span and enlarged fin

The first Sepecat Jaguar International flew at BAC Warton on 19th August, 1976. The 168th Jaguar assembled by BAC, it is temporarily registered G27-266. Ecuador and Oman have each ordered twelve "Internationals"

The prototype Scottish Aviation Bullfinch, G-BDOG, made its first flight at Prestwick on 20th August and later took part in the Farnborough display