THE FLIGHT AROUND AUSTRALIA: The photographs above show the Fairey III-D seaplane, with Rolls-Royce "Eagle IX" engine, on which Wing-Commander S. J. Goble, D.S.O., O.B.E., D.S.C., and Flying Officer L. E. MacIntyre, of the Royal Australian Air Force, have just succeeded in completing their 9,000 miles flight around Australia. The performance is one worthy of ranking among the foremost flights ever made, and reflects the greatest credit not only on the gallant officers who made it, but also on the machine and engine. The photographs show the machine at Point Cook, near Melbourne.

The Vickers "Viking Commercial" is very similar to the service type, and can also be supplied fitted with a Rolls-Royce "Eagle IX" engine.

THE DE HAVILLAND AUTOMATIC CAMBERING DEVICE: On the left the inspection door on the lower starboard wing is shown open, disclosing the aileron sprocket. On the right a view underneath the wing, showing the crank, rod, and king-post of the aileron and flap control.

The D.H.50 Landing at about 40 m.p.h. Air Speed: The flaps are right down, and it should be noted that although the machine is very near its stalling angle the tail is well up.

Trailing edge flap of the D.H. 50. The aileron extends over the whole span of the wings.

The Supermarine naval training school machine is a three-seater.

The Boulton and Paul "Bourges" all-metal machine is a long-distance reconnaissance three-seater. The engines are Napier "Lions."

A SUCCESSFUL HELICOPTER: Two views of the latest Berliner helicopter, constructed by Henry A. Berliner, of Washington, U.S.A., which has recently been making successful demonstrations before officials of the U.S. Army Air Service.

The Armstrong-Whitworth "Awana" is a troop carrier, with seating capacity for 25 troops.

A "Bristol" within the Arctic Circle: The Bristol Fighter, with Bristol "Jupiter" engine, starting for a flight at Kiruna aerodrome, Sweden. Note the ski undercarriage.

Landing on the Snow: The Bristol Fighter alighting at Kiruna after a trial flight. 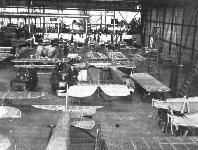 A Sign of the Times: A batch of 12 D.H.53 light 'planes coming through the shops at Stag Lane.

The "Kingston" is a five-seater reconnaissance flying-boat, designed and built by the English Electric Company. The engines fitted are two Napier "Lions." Our photograph shows a scale model of the "Kingston."

The Short "Springbok" is an all-metal two-seater fighter with 400 h.p. Bristol "Jupiter" engine.

Sketch elevations and plans of the Fiat "R.S." and "B.R." models.

THE "GLOSTER": A side view of the Gloucestershire Aircraft Company's world's record speed machine "Gloster," which won the Aerial Derby last Monday. A front view of this, aeroplane appeared last week exclusively in "Flight." The engine is a 450 h.p. Napier "Lion."
The Gloucestershire ''Gloster" won the 1923 Aerial Derby at a speed of slightly less than 200 m.p.h.

The Gloucestershire "Mars II" is a single-seater fighter with 230 h.p. B.R.II rotary engine.
The first Sparrowhawk I land-based fighter for the Imperial Japanese Navy.

The Gloucestershire "Mars III" is very similar to the "Mars II," but is a two-seater intended for intermediate training, being fitted with dual control.

The Gloucestershire "Mars VI" is a high-performance singleseater fighter, with very wide speed range and excellent climb. It is variously fitted with 400 h.p. Bristol "Jupiter" or Armstrong-Siddeley 370 h.p. "Jaguar" engine. The photograph shows the "Jupiter" machine.

A MODERN U.S. NAVY SCOUTING TWIN-ENGINED FLYING BOAT: This flying boat, known officially as the P.N.7. is an improvement on the famous F.5.L. flying boat. It retains the latter's hull, but is fitted with high-performance wings, as a result of which the overall span has been reduced by some 20 ft. Two 550 h.p. Wright T.2 heavy duty engines are fitted.

INTERESTING "ST.LOUIS" MACHINE: We show one of the many types of machines that took part in the 1923 St. Louis Air Races. The CO.5 (400 h.p. Liberty), a modification of the Fokker D.VII built by the U.S. Army Air Department at McCook Field. It obtained third place in the Liberty Engine Builders' Trophy Race.

The Vickers "Vulcan," in its latest form, is an eight-seater passenger machine, with Napier "Lion" engine.

THE R.A.F. AERIAL PAGEANT: Interesting machine which will make its first public appearance at the Pageant: The Westland "Weasel," a fighting and reconnaissance machine fitted with either a 380 Bristol "Jupiter" or a 320 Siddeley "Jaguar."

INTERESTING "ST.LOUIS" MACHINE: We show one of the many types of machines that took part in the 1923 St. Louis Air Races. The Verville-Sperry cantilever monoplane, 500 h.p. Curtiss D.12 special engine, which was entered by the U.S. Army in the Pulitzer Race.

The Bristol "Bullfinch" is a single-seater fighter monoplane, with 400 h.p. Bristol "Jupiter" engine

A NEW SOPWITH-HAWKER MACHINE: The "Duiker" is a two-seater corps reconnaissance monoplane, fitted with Bristol "Jupiter" or Siddeley "Jaguar" engine. The machine shown in the photograph has the former engine. As the "Duiker" is built for the Air Ministry, no detail information concerning it may be published. Note the tapering wing, which is thinned down in the centre so as to give a good view. The machine was designed and built by the H. G. Hawker Engineering Co., Ltd., of Kingston-on-Thames.

The Vickers "Vanellus" amphibian is similar to, and descended from, the Vickers "Vikings." The engine is a Napier "Lion."

"Close-up" of two of the three engines of the Handley Page W.8F: The engine in the nose is a Rolls-Royce "Eagle," while on each wing is a Siddeley "Puma."

THE HANDLEY PAGE W.8F: In the top left-hand corner is seen the top plane centre-section, with the two gravity-feed petrol tanks. Below a view of the cabin section of the fuselage before covering, and on the right a larger view showing step and door giving access to the pilot's cockpit. The tubing of the ventilation system may be seen.

THE HANDLEY-PAGE W.8F. "HAMILTON": The first 3-engined machine to be used by Imperial Airways. It had a central Rolls-Royce "Eagle" engine and two Siddeley "Puma" wing engines. Next to the pilot is Major-General Sir Sefton Brancker, Director of Civil Aviation.

The Handley Page W.8F in flight.

SOME CONSTRUCTIONAL DETAILS OF THE HANDLEY PAGE W.8F: 1. Shows the tubular framework of the central engine mounting, with details of terminal fittings. 2. A typical inter-plane strut fitting with details. 3. The tail skid renewable shoe.

FURTHER CONSTRUCTIONAL DETAILS OF THE HANDLEY PAGE W.8F: 1. The exhaust-heated muff carrying warm air into the cabin. 2. Details of the tail plane trimming gear. 3. The neat strut arrangement which steadies the wing-tip rib

THE DAIMLER L.15: On the left a sketch showing the folding tail, and on the right a view of the detachable "nose" of the fuselage.

THE DIETRICH-GOBIET D.P.VII: Side view. Designed for cheap and rapid production, this machine will, it is hoped, become a "Ford of the air." An example may be exhibited at the Prague Aero Show

The "Avro-Lynx" will be exhibited at Prague.