The Spitfire I X4857 soon after its arrival in Portugal early in 1943.

A Spitfire VB serving with the USAAF’s 496th Fighter Training Group at Goxhill in 1944.

A Spitfire LF Mk IXE in service with the Turkish Air Force. 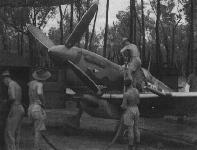 Personnel of the Australian-manned No 457 Squadron at Sattler in February 1945, showing shark's teeth insignia on the Spitfire VIII.

A Spitfire IX with guns removed, wings clipped and an oblique camera fitted, operating with No 60 Squadron of the South African Air Force.

An F Mk XIV of No 2 Squadron in 1945 modified to carry an oblique camera.

The first of the Griffon-engined Spitfires, DP845, in its earliest Mk IV configuration, with a Griffon IIB, retractable tailwheel, underwing flap brackets and standard wing. In this guise, it was later fitted with a mock-up of six wing cannon.

One of the six airframes used in development of the Spitfire XIV is shown here. JF318 in initial configuration with a Mk VIII tail unit.

One of the six airframes used in development of the Spitfire XIV is shown here. JF319 with increased fin area

One of the six airframes used in development of the Spitfire XIV is shown here. JF321 with Griffon 85 and contra-prop.

The prototype DP851 as the Mk 21 prototype, showing the extended, pointed, wing tips and four-bladed propeller.

The first production Mk 21 with a similar extended wing but the definitive tail unit and five-bladed propeller.

A post-war photograph of one of the few Spitfire F Mk 21s with a contra-prop.

Stripped of its camouflage after the end of the war, this Spitfire F Mk 22 shows the definitive tail unit

The sole Spitfire IX converted - by Folland Aircraft - to be the last of the Spitfire floatplanes.

One of Folland's Spitfire VB conversions that operated from the Great Bitter Lake in Egypt at the end of 1943.