The staff of the Air Survey Co. at Rangoon with a trusty old D.H. 9 (Siddeley Puma).

Another view of the Air Survey Co.'s seaplane base at Rangoon.

BOMBAY FLYING CLUB "AT HOME": General view of the members' enclosure at Juhu Air Park on the occasion of the Bombay Flying Club's "At Home" and Aerial Display, December 3, 1929. The machine is a D.H.9

AIR TRANSPORT IN SWITZERLAND: One of the Balair machines being loaded with freight, of which the company carried a considerable amount. 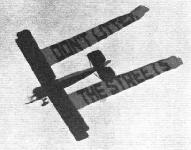 AN EXHORTATION: Mr. Ledlie shows the Cleansing Committee how to get to work.

The Do. X: View of the pilots' control cabin.

Sectional side elevations and transverse sections of the Do. X. Note the longitudinal steps and tumblehome sides. The rear step is narrow, and carries a water rudder (not shown).

THOROUGHNESS: Proof loading the "Moth III" fuselage. Above, the rear fuselage loaded to 8,500 lbs., and below, the engine mounting with 2 tons suspended from it.

A 1930 MODEL: The latest edition of the Moth III, which should appeal to those pilots who have reached the stage of wishing for something "warm and dry" to fly in.

Grace and Speed: The Moth III should certainly confute the critics who think that a cabin aircraft is synonymous with lack of speed, but whether the tandem seating arrangement will find favour will be an interesting point to watch.

An unusual and - as yet - unfamiliar physiognomy: The use of an "inverted'' Gipsy engine in the new de Havilland "Moth III" has resulted in a nose which looks a good deal like a heron, what with the low position of the head and the raised shoulders. The machine is probably one of the most efficient, aerodynamically, produced so far, having a top speed some 20 m.p.h. higher than that of the ordinary Gipsy-Moth. 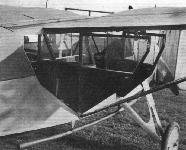 Easy access and good view are the two outstanding features of the new de Havilland "Moth III." The position of the fuselage over the ground is very low, and the occupants can step straight into the cabin. Large windows and a transparent roof give an airy impression as well as a good view.

The Blackburn "Iris III" Flying-Boat is of all-metal construction except for the wing covering.

A METAL AVIAN TO SERVE THE SHELL INTERESTS: This machine is one of the latest acquisitions of the Shell-Mex organisation. They are now launching a scheme whereby an attack will be made on the Dominion markets with the aid of aircraft, and this Avian (Genet Major) was christened, together with two Moths (Gipsy), at Croydon Aerodrome on Thursday, February 6.

A Ford all-metal monoplane arrives at Madrid for the Madrid-Paris line. It was embargoed at Seville by the Junkers Co. regarding patent rights, but later released under bond.

ELSEWHERE in this issue we refer to the activities of the Air Survey Company and mention that the second Fairey III F. machine, which has been specially built with a Jaguar VI.C. engine, would shortly be ready. This aircraft was recently demonstrated at Northolt and our photographer has caught Mr. C. R. McMullin showing the sort of speed which makes aircraft for commercial use a paying proposition. The Jaguar engine has been very neatly cowled, and in this case certainly does not spoil the proverbially good lines of the III.F.

ON this page we show how the Eagle Camera has been arranged in the III F.'s supplied by the Fairey Aviation Co. to the Air Survey Co. for their work in the Sudan. The view shows the camera projecting underneath the fuselage, and sloped for oblique photography. 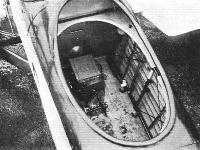 ON this page we show how the Eagle Camera has been arranged in the III F.'s supplied by the Fairey Aviation Co. to the Air Survey Co. for their work in the Sudan. A view looking down into the cockpit gives one a very good idea as to the room the operator has when working the camera. This cockpit can be re-arranged to carry three passengers, should it be desired to use the machine for transporting the ground staff from one spot to another or for any such similar work.

The "Daily Mail" having had a run of bad luck with "Geraldine" have now purchased a Desoutter; no doubt they will be happier with their latest love! 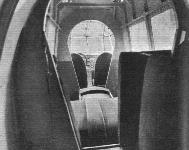 View looking forward inside the cabin of the Towle T-2 Amphibian. Note the generous proportions of windows and windscreen.

"SIR CHARLES WAKEFIELD": The D.H. Moth presented to the Bombay Flying Club by Lord Wakefield. In front of the machine are Mr. J. A. Brown (left), of C. C. Wakefield and Co., Ltd., and Mr. W. Scott King, the Club's Engineer.

PRESENTING A "MOTH": A D.H. Moth (Gipsy) was presented to the Bombay Flying Club by Sir Charles (now Lord) Wakefield on the occasion of the Club's "At Home." Our picture was taken after the christening, and shows, from left to right, Mr. M. A. Fazalbhoy, Mr.C. M. Eastley, Mrs. F. D. Petit, Master Sykes, H.E. Sir Frederick Sykes (Governor of Bombay, who christened and handed over the machine), Sir Victor Sassoon, and the Governor's A.D.C.

A LADY OWNER IN AUSTRALIA: Lady Somers, the wife of the Victorian State Governor, is now the owner of the above Gipsy Moth. She took her "A" licence in England, and is said to be the first woman in the Commonwealth to own her own machine.

A PROFESSOR TYPE: The "Wien"

Side-by-side dual control can be provided, as this view, looking into the cockpit, illustrates.

An interesting advanced type of machine which has been designed by Flt.-Lt. Latimer Needham, R.A.F. This is now being constructed and should be admirable for those pilots who have attained proficiency in the training type glider. At a later date we hope to publish full details of this machine. 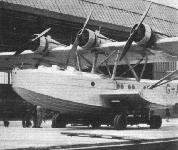 The Berliner-Joyce Commercial monoplane, the main feature of which is the good visibility obtained by the arrangement of the wings in relation to the cabin.

The exterior and interior views of the cabin in the lower picture.

THE INSTRUCTIONAL TYPE: A Zogling glider