The parachutist still provides a certain attraction, and Mr. Stewart is here seen ready with his Russell-Lobe parachute on the wing of Sir Alan's D.H. 9.

FOR BLAZING THE TRAIL: The Junkers J.52, "Romania," in which Prince George Bibesco, President of the International Aeronautical Federation, is carrying out a survey flight from Paris to Madagascar with a view to finding the shortest and most suitable air route, and to map out new petrol and supply stations.

A NEW AMERICAN PERSUIT PLANE: The Curtiss P 6-E biplane which was recently tested for the U.S. Army Air Service at Mitchel Field. It is claimed to have a ground speel of 220 m.p.h. or over 300 m.p.h. in a dive.

The fuel supply is of paramount importance on a tour like this, and throughout this National Benzole lorry will accompany the outfit to each aerodrome. 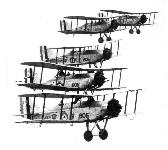 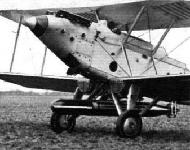 AS A LANDPLANE: View of the "Vildebeest" in the act of dropping its torpedo.

The photograph gives a good idea of the small amount of spray created by the torpedo on striking the water.

AS A SEAPLANE: The "Vildebeest" in full flight. The upper photograph shows the machine as a landplane, with the torpedo in place.

THE "TIGER MOTH" ON FLOATS: In the description of the De Havilland "Tiger Moth" Training Machine (Gipsy III engine), published in "Flight" of November 13, 1931, we included a side elevation drawing showing the machine fitted with floats and, alternatively, wheels. A set of floats has now been made for it by Short Brothers, and our photograph shows the machine in one of the shops at Stag Lane. It will be seen that the "Tiger Moth" makes quite an attractive-looking seaplane.

FOR AEROBATICS: The Caproni CA.113, which is fitted with a 240-h.p. Walter air-cooled radial engine.

Mr. Nigel Norman leaves Mr. Fred Denslow, manager of the United Airport at Burbank, to face the camera alone. The "Puss Moth" was borrowed from the de Havilland works at Toronto.

THE "FERRY": Unusual Features are the placing of the central engine, the raising of the lower plane wing roots, and the winglet enclosing the axles and radius rods. 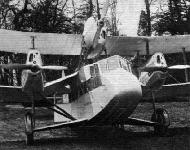 "YOUTH OF BRITAIN II": The first Airspeed "Ferry" poses for its portrait at Hanworth. This machine, which was described in "Flight" of April 15, is a ten-seater to be used by Sir Alan Cobham on his tour of Great Britain. The engines are two Gipsy II's and one Gipsy III. 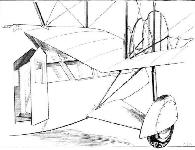 NOVEL FEATURES: The lower plane roots are raised to the top longerons. A winglet encloses the wheel axle and radius rod, and is hinged to the fuselage. The cabin door arrangement, the wing engine mounting, and the "spats" over the wheels are other features illustrated.

The details of the raised lower wing root are illustrated in this sketch. The spars as well as the compression member are of box section. The wing engine is carried on bearers projecting forward from the front spar.

THE BLACKBURN "IRIS V": The machine is taxying slowly with only the outboard engines running.

THE BLACKBURN "IRIS V": This photograph shows the machine being launched down the slipway at Brough, her three Rolls-Royce "Buzzard" engines already running.

The Stinson Junior which Mr. Cathcart-Jones is flying round Spain for his employer, Mr. James, is here seen by the N.F.S. workshops at Hanworth.

A NEW FORD TYPE: The 14-A is of unusual design and equipped for carrying passengers by night as well as by day. The central engine is a Hispano-Suiza rated at 1,100 h.p., while the wing engines, of the same make, are of 715 h.p. each. The wing engines are housed in the wing, while the central engine is placed in a streamline tower above the wing. The wing span is 110 ft. and the area 1,600 sq. ft. It carries 38 passengers at an estimated cruising speed of 150 m.p.h.

The Bleriot 110 Zappata monoplane as used by Bossoutrot and Rossi in their recent world's record flight (distance, closed circuit).

A COMPER "SWIFT" TRAVELLER: Mr. M. Lacayo in the Comper "Swift" (Pobjoy "R" engine) in which he set out from Heston on April 21 on a two months' tour of the Continent to demonstrate the qualities of machine and engine.

The Farman 190 (240 h.p. Lorraine) on which M. D'Estailleur Chauteraine made a Flight Round Africa.
It was on a similar type of machine to this, fitted with a 300-h.p. Lorraine engine, that Goulette and Salel accomplished their flight from Paris to Cape Town in 3 3/4 days.

THE POSTERIOR ASPECT: This view, taken from immediately behind, shows wing construction, etc., rather well. Note the placing of the petrol tanks in the wings. The top boom of the wing spar continues right across the fuselage.

ENGINE SUPPORT: The engine plate proper is carried on four tubes forming a "double wedge," and prevented by a continuation of the leading edge from swinging laterally. Note the oil tank and cooler.

THE FUSELAGE GIRDER: The photograph should be examined in conjunction with the sketches on the next page.

THE BUSINESS PORTION OF THE ST.4: The Pobjoy "R" engines drive Fairey metal airscrews. Note the slimness of the Dowty telescopic legs. The cabin is reached via hinged combined doors and roof.

THE PORT POBJOY Some wing root details may also be seen.

THE SINGLE SPAR: The photograph shows the general arrangement of the shear members

SIDE VIEW OF THE ST.4: The single girder of the fuselage primary structure can be clearly seen. Note also swivelling tail wheel. A corresponding view of the scale model is at the top of the page.

REAR END OF THE FUSELAGE: Details included are the tail-trimming gear and the castoring tail wheel.

AS IT WILL APPEAR: A composite photograph of a scale model of the ST.4. The actual cowling over the Pobjoy engines will not be of the totally-enclosing type. 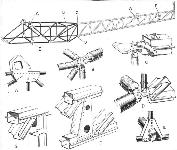 THE PRIMARY STRUCTURE OF THE FUSELAGE: The key diagram gives the locations of the details. The torsion bracing has been omitted.

THE SINGLE SPAR: The sketches illustrate structural details. The small sketch at the bottom shows the rib-supporting brackets.

TAILPLANE AND AILERON: The tailplane is shown in the upper photograph and an aileron in the lower. Details of the various members are shown on the right.

THE FUSELAGE GIRDER: Sketch shows the details of the girder and the torsion bracing, etc.

FLIGHT-TESTING THE NEW NAPIER ENGINE: The first of these engines (6-cylinder in line air cooled, 150 h.p.) has been built into a "Spartan" aeroplane for the purpose of extensive flying tests. The machine is likely to visit, during the test period, several British aerodromes, and readers are advised to bear in mind the registration letters G-ABST. By way of mnemonic assistance we would suggest British Summer Time.

FOR SMOOTH LANDINGS: A "Moth" (Gipsy) belonging to Eastern Air Transport, Ltd., which is used at the Skegness Aero Club. This firm know the damage which pupils may cause an aircraft by heavy landings and they have therefore wisely obviated this as far as possible by fitting Goodyear Airwheels.

AT DUNSTABLE: Erecting the B.A.C.VII in a field near Dunstable preparatory to doing some auto-towed gliding during the Easter holidays. 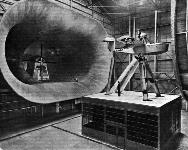 THE AMERICAN COUNTERPART: The full-scale wind tunnel at Langley Laboratory gives an air stream 60 ft. wide by 30 ft. high. One of the 35-ft. diameter four-bladed airscrews can be seen. It is driven by an electric motor of 4,000 h.p. The aircraft is supported on a six-component balance.

FULL SCALE RESEARCH: This photograph of the new large wind tunnel at Langley Field, Virginia, has been very kindly lent to us by Mr. John J. Ide, Technical Assistant in Europe of the American N.A.C.A. The tunnel is of the open type, and the aeroplane is supported on a six-component balance by means of struts in the centre of an airstream 60 ft. wide and 30 ft. high. The four-bladed propellers which circulate the air are of 35 1/2 ft. diameter, and each is driven by an electric motor of 4,000 h.p. the high figure of 112 m.p.h. The machine under test is a Loening flying boat.

THE BREDA 32 WING: A general view of the port wing, showing single spar, ribs, skin, etc. The four pipe unions by which the wing is attached to the wing root are seen at the right-hand extremity of the picture.

CAREFUL FAIRING: The wing engines of the Breda 32 are well cowled in, and the undercarriage has been streamlined by "spats" rigidly fixed to, and moving with, the wheel. On the right is a sketch showing how the metal skin is stiffened by "blisters."

DETAILS OF WING AND UNDERCARRIAGE: This photograph gives a good idea of the construction of the single spar, which is a girder built up of box-section booms and struts. The telescopic leg of the undercarriage is attached to the spar, and housed inside the wing. The other lugs seen are for the support of the engine mounting.

OF BIRD-LIKE PROPORTIONS: A three-quarter rear view of the Nyborg sailplane. The designer is standing by the right-hand wing tip and his assistant, Mr. H. Green, is in front. The dimensions are :- Area, 45 sq. ft.; span, 32 ft.; chord, 16 in.; weight, 370 lb., including 150 lb. for the pilot; the gliding angle at 57 m.p.h., according to Mr. Nyborg's calculations, should be about 1 : 54. The large rudder is being used temporarily for auto-towing, and if possible will later be discarded for a much smaller one which will be assisted in obtaining directional control by two small drag-producing flaps under each wing-tip. The trailing edge of the wing inside the aileron is divided into three flaps on each side which can be used for increasing the effective camber and as air brakes.

HIGH ASPECT RATIO: A front view of the Nyborg sailplane which gives a good idea of its narrow chord wings. Mr. T. G. Nyborg is on the left, Mr. H. Green on the right, and the pilot in the cockpit is Mr. L. C. Williams. The wing spar is a solid 4 in. by 3 in. spruce beam tapered from the root and the wing is plywood covered. To obtain his design Mr. Nyborg has scaled up the best soaring birds, thus his sailplane has the same loading and dimensions one would expect, say, an albatross of the same weight to have.