Belgian Defence Air Component F-16AM FA-130 taxies in at Kleine Brogel Air Base after returning from Afghanistan on October 3, 2014.

Royal Canadian Air Force CF-18 Hornet 188751 from 409 Squadron taxies out for an Operation Impact mission at an unspecified air base in Kuwait on November 9, 2014.

The 12th NH90 Caiman for France’s Aeronautique Navale (Naval Aviation), No 12 (c/n 1300, ex F-ZWCF), arriving on October 23, 2014 at Lanveoc-Poulmi at the end of its delivery flight. The helicopter was flown in by a crew from the Centre de’Experimentations Pratiques de /’Aeronautique (CEPA, Practical Aerospace Experimental Centre) to join Flottille 33F. This marks the halfway stage in Caiman deliveries to the French Navy, which has ordered 24, the last of which is due in 2019.

Three of the six AG51 Tornado ECRs sent to Lossiemouth by the Luftwaffe.

RAF No.31 Squadron Tornado GR4s return home to RAF Marham, Norfolk, on November 15, 2014 from Kandahar; Afghanistan, ending the final Tornado detachment to the country after a five-year presence.

The fourth Mi-38 during its first test flight at Kazan.

Hellenic Air Force (HAF) A-7E Corsair II 159648 painted up in a special colour scheme to mark the end of 39 years of A-7 operation at Araxos on October 17, 2014. The markings on the tail include the badges of all the previous HAF A-7 units. A special event was held at the base on that date to mark retirement of the type by the HAF, the world's last Corsair operator.

Other UK assets included 100 Squadron Hawks from Leeming, and this Puma HC1 from Benson. 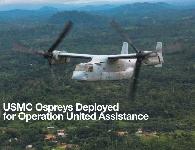 US Marine Corps Bell-Boeing MV-22B Osprey BuNo 168226/‘EH-06’ from Marine Medium Tiltrotor Squadron 264 ‘Black Knights’, operating with the Special Marine Air-Ground Task Force-Crisis Response Africa detachment at Moron, Spain, flies over Liberia on October 13, 2014 to conduct surveys as part of Operation United Assistance, the US effort to respond to and contain the outbreak of the Ebola virus in West Africa. Four MV-22Bs and two KC-130Js from SPMAGTF-CR deployed to Monrovia, Liberia, on April 9 to support the mission.

Scoot will be the first low-cost carrier to operate the ‘Dash Nine’ Dreamliner.

BAE Systems and Dassault are working jointly on the FCAS Feasibility Study.

Peruvian Navy Fokker 50 AE567, with its former RNLAF serial U-05 temporarily applied on a sticker, returns to Lelystad airport in the Netherlands after a functional check flight on November 10, 2014. The label was partly torn during the flight to reveal the aircraft's Peruvian identity.

Royal Air Force Airbus A400M Atlas, ZM400 (c/n 015), on a very wet ramp at RAF Brize Norton, Oxfordshire, shortly after arrival on delivery from Seville, Spain, on the afternoon of November 17, 2014. The aircraft is the first of 22 on order for the RAF.

Aero Flite Avro RJ85A N839AC (c/n E2270, ex G-CLHX) departs McClellan Field in Sacramento, California, to fight the nearby Applegate fire, which burned through 459 acres of land in Placer County in October 2014. This aircraft, which spent 11 years with Lufthansa CityLine as D-AVRI before being converted to a tanker, is one of nine BAe 146s/Avro RJs used for aerial firefighting by American and Canadian companies. It can deliver 3,100 US gallons (11,734 litres) of retardant.

St Maarten in the Caribbean is one of the thin long-haul routes that US majors feel 757s are well suited to.

Lufthansa plans to begin low-fare services to long-haul leisure destinations in autumn 2015, and now says it is considering launching a second carrier into this sector.

The first Royal Air Force of Oman (RAFO) C295MPA maritime patrol aircraft, ‘118' (c/n S-118), test flying from Seville-San Pablo Airport, Spain, on October 23, 2014 after being fully painted, having previously flown only in primer. The RAFO has ordered eight C295s, of which three will be in MPA configuration.

OGMA Industria Aeronautics de Portugal manufactures the sponsons and doors of the main landing gear, which is designed by another Portuguese company, Empresa de Engengaria.

The KC-390 is powered by two International Aero Engines V2500-E5s, as used by the A320. They feature minor FADEC modifications for specific military tasks.

Winglets and new FJ44 engines are set to increase the Beechjet 400A's range by 33%.

SpaceShipTwo during its first rocket-powered flight.

NTSB investigators observing the WhiteKnightTwo launch aircraft during their investigations.

Cypriot National Guard Air Wing AW139 703 (c/n 31367) from 460 Mira Erevnas Diasosis (460 Search and Rescue Squadron) about to be loaded with a simulated casualty on the USS Gunston Hall (LSD 44) on October 7, 2014 during the bilateral search and rescue (SAR) exercise between Cyprus and the US. Also flying from the US ship as part of the exercise was Cypriot Police Aviation Unit AW139 CP-8 (c/n 31325).

MD-11 PH-KCE at Amsterdam Schiphol on October 26, 2014 after its last revenue service.

Ilyushin Il-76MD-90A military heavy transport aircraft, 78651 (c/n 01-03), made its first flight at the Aviastar facility at Ulyanovsk on October 3, 2014. On November 13, it was handed over to Beriev for conversion into the new A-100 AEW&C aircraft prototype. 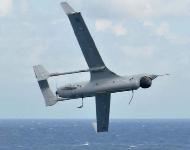 A total of 57 RQ-21A Blackjack systems are due to be acquired for the US Marine Corps and US Navy.

The first Boeing 737-8AL(WL) for the new Eastern Air Lines (N276EA, c/n 35070, formerly with Kenya Airways as 5Y-KYB), at Shannon Airport shortly after repainting. It is one of ten 737-800s that will be used by the company. The new Eastern has been set up by a group of airline managers who in 2011 acquired the intellectual property of Eastern Air Lines, which ceased operations in 1991.

US Marine Corps Lockheed Martin F-35B Lightning II BuNo.168717/‘MV-05’ arriving at Edwards Air Force Base, California, on October 9, 2014. The aircraft is the first of the type for Marine Operational Test and Evaluation Squadron 22 (VMX-22) ‘Argonauts’, which will have its full complement of four F-35Bs within the next few months. It was previously coded ‘VK-151 and operated by Marine Fighter Attack Squadron 121 (VMFA-121) ‘Green Knights' at Marine Corps Air Station Yuma, Arizona.

The first Falcon 5X is due to fly in the second quarter of 2015.

The first clear photograph to emerge of one of the two KJ-500 prototypes, serial number ‘737’, on final approach to the CFTE base at Xi’an-Yanliang. The type is a next-generation medium-sized AWACS that is scheduled to enter service with the PLAAF.

Так должен выглядеть новый многоцелевой вертолет SB-1 Defiant
A partnership between Boeing and Sikorsky is offering the SB>1 Defiant for the JMR technology and demonstrator programme.