The Wellington prototype shows off its clean lines in the air. The nose was still fabric-faired when this photograph was taken.
THE VICKERS WELLINGTON, fitted with “Bristol” Pegasus engines, is a twin-engined, mid-wing monoplane of Vickers "geodetic" construction; with cantilever wings, retractable undercarriages, patent ailerons, split flaps and controllable-pitch airscrews. Designed for fast long-range bombing or service transport, the normal crew numbers four, including two pilots. No performance figures are available for publication. In production for the Air Ministry by Vickers (Aviation) Ltd.

The B.9/32 running-up its engines beside the Vickers factory at Brooklands.

The geodetic airframe of the B.9/32 during construction.

The Wellington prototype photographed at Brooklands on June 30, 1936, at a pre-Pageant display of Vickers aircraft. Note the uncompleted dorsal turret and the fairings over the nose and tail turret positions. 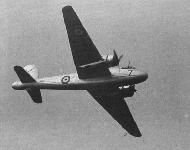 The B.9/32 Wellington prototype, K4049, before delivery to Martlesham Heath. The aircraft is seen flying at the RAF Display in June 1936, only days after its first flight, made from Brooklands on June 15, and is numbered 7 for exhibition in the Hendon new-types park.

The Wellington flying early in 1937. The original stubby fin and rudder were completely re­designed for production aircraft. Note that the nose glazing has been fitted. It will be noted in the view that crankcase cowlings of a type which was popular in the U.S.A. some years ago have been fitted experimentally.

The Wellington prototype photographed at Brooklands on June 30, 1936, at a pre-Pageant display of Vickers aircraft.