Behind the main beacon at Heston: The Ju.52 is making a demonstration approach.

"It was rightly felt that the aircraft firms could deal with the large orders required." Hart Trainers under construction. 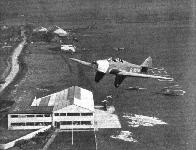 OUT AND UP: This Flight photograph, taken at Reading Aerodrome, shows Wing Comdr. F. W. Stent flying the Miles Hawk Trainer in its latest form. In the foreground are the Phillips and Powis experimental shops and in the distance are the New Reserve school and the service hangars.

ODYSSEY, 1936: The Miles Falcon (Gipsy Six) in which Flt. Lt. T. Rose handsomely lowered the England-Cape record; this Flight photograph was taken during a final test on the day before the successful attempt started.

STAR-DUST: That the Lockheed Model 12 is descended from the Electra is readily apparent here.

The distinctive outline of the big Amiot 142 (two Mistral Majors) is apparent here.

This is the Marcel Bloch 200 (two Mistral Majors) which is now in everyday use. It does about 180 m.p.h. A number of French firms are building this machine under licence for the French Government.

The Dewoitine D.371 single-seater is being supplied to the French Navy as a fleet fighter and to Lithuania. Its Mistral Major gives a speed of 235 m.p.h. Two canons may be carried.

NOCTURNE: One of the United Air Lines' Boeing 247 's in front of the terminal buildings at Burbank Airport, California - which is generally considered to be America's model airport.

The Vickers "Wellesley" medium bomber (Pegasus XVIII), in which the famous geodetic construction system is employed, is another type for which a considerable order has been placed.

GAUDY RAIDERS: Italian Savoia Marchetti S.81 bombers of the type which is being used in increasing numbers in Abyssinia. The S.81 may be regarded as a military version of the S.73 used by Sabena.

The 3,600 h.p. Farman F-221 is a champion weight lifter with four Mistral Majors. In a later form it is being built for the French Air Service.

Fitted with the French Gnome-Rhone Mistral Major fourteen-cylinder radial of 870 h.p., this Belgian Renard R-32 observation monoplane - which also functions at will as a two-seater fighter or light bomber - has a maximum speed of 230 m.p.h at 13,120 ft. It stalls at 59 m.p.h., has a service ceiling of over 37,000 feet and a range of 800 miles. Its somewhat peculiar wing is said to show interesting characteristics on climb and during a landing: the machine will reach 16,400 ft. in 7 minutes. A notable feature is the cockpit enclosure. 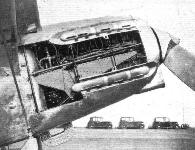 THRUST: In this view of the Napier-Halford Dagger III engine in the Hawker Hector, the sturdy bearers and the uncommon exhaust arrangements are visible. The Dagger III has 24 cylinders and develops a maximum of 805 h.p. 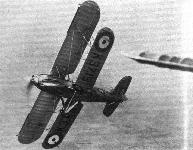 GUARDIAN ANGEL TO THE INFANTRY: The newest Army Co-operation aeroplane to be adopted by the R.A.F. is the Hawker Hector with Napier-Halford Dagger III 24-cylinder air cooled engine.

Another view of the prototype Hawker Hector army co-operation machine with the Napier-Halford Dagger III moderately supercharged 24-cylinder air-cooled engine, which is rated at 725 h.p. and gives a maximum of 805 h.p. at 4,000 r.p.m., and 5,000 feet. It achieves something like 200 m.p.h. The top wing has no sweepback (the installation of the Dagger moved the C.G. forward) and a cut-away gunner's position is incorporated. 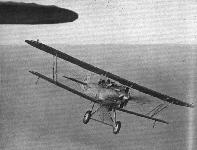 THE BAGGAGE TRAIN Two Vickers Valentias carried the equipment of this Hart squadron on its flight from Risalpur to Singapore and back. Here they are seen at Dum Dura, near Calcutta.

The Douglas on the tarmac in front of the terminal building at Zurich - an example of clean and "obstruction-free" design which might be copied elsewhere.

When accurate navigation is necessary: A sea of cloud laps against the Alps; Basle lies below it.

Waiting for permission to leave the tarmac at Croydon. The loop aerial can be seen above the control cabin as well as the oiled leather-coated spinners for ice protection.

Overhauling one of the five Swissair Douglas machines in the Zurich shops, which are kept scrupulously clean and must be among the most up to date in Europe.

The Sperry in charge,at 9,000 ft. over Rheims, while the pilot, Mr. Nieffenegger, looks on before returning to his charts.

This is probably the first photograph ever taken of a machine on its back with the pilot - in this case Flt. Lt. H. A. Howes - by himself and under the hood.

The conspirators between acts: Mr. G. E. Lowdell and Flt. Lt. H. A. Howes snapped a moment before the latter took off to "pose" for the next picture.

FOR IMPERIAL SERVICE: The first of the new D.H. 86A's which are being built for Imperial Airways. machines are not fitted with v.p. airscrews. 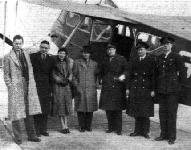 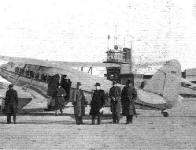 A snapshot taken at Amsterdam on the British Continental Airways inaugural flight. Leaving the machine is Mr. D. A. Adkins and in the group, left to right, are Messrs. J. R. Bryans, F. W. Jones, M. C. Bryans and W. K. Bear.

THE OLD ORDER CHANGETH: This photograph affords an interesting comparison between the 1935 and 1936 versions of the de Havilland Hornet Moth.

Comfort and good view in all essential directions are features of the 1936 Hornet Moth, which, with side-by-side seating is equally suitable for touring and tuition. With a 130 h.p. Gipsy Major engine, the maximum speed is about 124 m.p.h. and the cruising speed 103-108 m.p.h., according to the degree of throttling.

On the stocks. A view in the Rochester works, showing hulls 1 to 5.

The engine nacelles for boat No. 1 nearly completed, with others in jigs. The details of the wing construction are somewhat similar to those tried out in the Short Scion.

The frame in way of rear spar is shown on the left. Note the straight sides and small beam-depth ratio. On the right, a view inside the hull of boat No. I, looking aft.

A view of the cantilever tail

The "box " section wing spar of one of the first boats in course of construction.

Cylindrical petrol and oil tanks. Note the baffle plates, and the numerous tie rods which brace the tank ends. 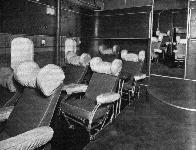 IMPERIAL LUXURY: The after cabin of one of the new Short "Empire" flying boats, seen from the promenade cabin. For night work, bunks will be rigged above the luxurious seats - which, it will be noted, are provided with adjusting levers to set the backs to any desired angle. By day the boat will carry 24 passengers, and 16 by night - which suggests even more intricate booking problems for the Imperial Airways traffic staff. This photograph, of course, is not of the interior of an actual boat, but of the careful "mock-up" which serves as a guide to the fitting-out of the finished article.

ON THE MEDWAY SOON: A new composite picture showing how a flying boat of our new Short Empire class will appear. Notice how, with the reduction in span, the outboard engines are neating the wing tips. These engines are likely to be 820 h.p. Pegasus Xs and will drive D.H.Hamilton airscrews. 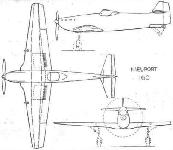 In external appearance the 643 Mk.II resembles the ordinary staggered Cadet. The re-arrangement of the bracing wires is visible in this view. 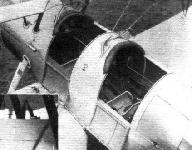 Ease of exit by parachute is desirable in a training aeroplane and is not lacking in the new Cadet. This view shows also the capacious luggage locker. 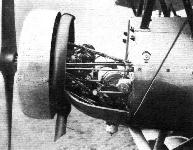 The grouping of the accessories behind the engine and the ease of access to them for maintenance purposes is visible here. Note the oil cooler.

Sharjah, Oman, on the Persian Gulf, a desert station on the Empire route. This view is from one of the fine dioramas at the recent Imperial Airways Exhibition.

Members of the crew of the Swedish aircraft carrier Gotland pose for Flight beneath their Ospreys.

This picture indicates the length of deck occupied by the aeroplane tracks and the catapult.

The stern of the Gotland is of somewhat unusual formation. This view shows the crane and the two folded Ospreys.

PAROCHIAL TRANSPORT: This is the Rev. Father J. M. Coulture who tends the needs of his flock by air. The machine is a ski-equipped Aeronca. on which the "sky pilot" owner has covered many thousand miles.

The prototype Bristol 142 (two 605 h.p. Mercury VI) from which a medium bomber is being developed.

The semi-monocoque fuselage and tail unit of the Marendaz monoplane.

NOT A POU-BUILDER'S NIGHTMARE, but just a roadside interlude at Karachi, where The Aero Stores have built this Pou-du-Ciel under the supervision of Mr. Wainwright Fahey, of Karachi Airport. A Scott engine is fitted.

ACCLAMATION: Crilly Airways' Fokker F.12, Lisboa, surrounded by an interested crowd at Lisbon after the inaugural flight. A daily service will be started as soon as the aerodromes are really fit for use after the heavy rains. 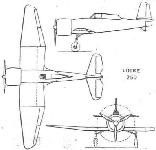 The doors of the Nighthawk are designed with a view to quick exit in an emergency.

SPIN-STOPPING BY PARACHUTE: Mr. F. G. Miles has evolved a scheme, not yet tested in actual flight, for stopping a flat spin during the flight-testing of new aircraft by releasing a small parachute anchored to the tail of the machine. In this picture the parachute is being fitted on a Nighthawk.

The new Miles Nighthawk has an ingenious arrangement of hoods by which the pupil is prevented from seeing the horizon, although he can see, and fly by, the instruments fitted to the dash. The instructor retains a very wide angle of view. In the spring the Nighthawk will become available as a luxurious four-seater.

This is the prototype Nighthawk, with a Gipsy Six engine, prior to being tested by Mr. Miles. 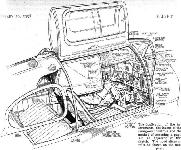 The duplication of the instruments, the layout of the swing-over controls and the method of screening a pupil are all apparent in this sketch. The hood slides on rails. 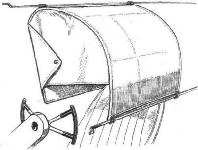 This Flight sketch shows the hood which can be unbuttoned and slid back.

PERSONALITIES AND PETROL AT GRAVESEND: The aeroplane in this photograph, seen standing in front of the big hangar (erected by A. and A. J. Law, Ltd.) at Gravesend Airport, is the metal Moth which Miss Jean Batten flew to Australia, and which now belongs tor Mr. Michael Sassoon, who keeps it at Gravesend. It is being refuelled from a T.B. 250-gallon portable unit which Airworthiness, Ltd., have found " to prove worth its weight in gold." In the left foreground are Mr. Garnon, the local Esso representative and Mr. H. C. Brown, manager of Airworthiness Ltd. The Airworthiness workshops are stated to be very busy, while the students of the Company's engineering school are now designing an aeroplane of their own.

A Scapa engine nacelle. In this view the nacelle has been placed on its side in order to show the inspection doors in the floor by which engineers reach the engines. The nacelle is of all-metal construction.

The photograph forms an interesting companion to the sketch on the previous page in that it shows the special ribs in the wing root. These ribs are of channel section.

A view of the hull, with wing roots in place.

Interior of the Scapa looking towards the bows

Interior of the Scapa. The camera was pointing towards stem of the hull.

A somewhat unusual wing spar construction is used in the Supermarine Scapa biplane flying boat. The spar, known as a “Sigma” section, is built up of three corrugated strips

The Vickers-Supermarine Scapa all-metal hull. The large drawing shows the shape and arrangement of the frames, bottom stringers, etc., while the smaller sketches illustrate various typical joints whose location in the hull is indicated by the reference letters. On the right is an enlarged view of a portion of the bow frame and its attachment to the keel.