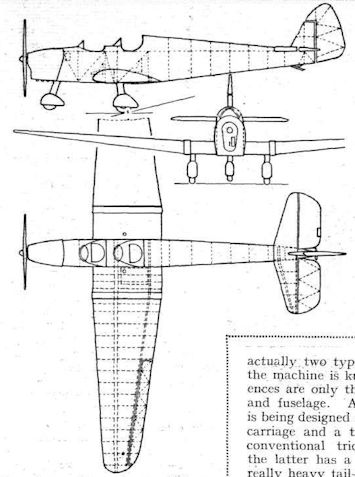 AFTER successful work on a number of sailplanes and light aeroplanes (the best-known of which is probably the single-seater Kitten), Mr. A. R. Weyl, of Dart Aircraft, is now proceeding with work ДальшеMore>>> on a medium-sized two-seater. There are actually two types of the Weasel, as the machine is known, but the differences are only those of undercarriage and fuselage. A private-owner type is being designed with a normal undercarriage and a training type with a conventional tricycle undercarriage; the latter has a simple skid to take really heavy tail-down landings. The trainer also has open tandem seating arrangements, while the owner type, though still having full dual control, is a side-by-side-seater cabin machine.
In each case the wing is arranged in three parts - a centre section and two folding outboard wings - while the aerofoil section changes from root to tip with a wash-out similar to that of the Kitten, in which the stalling characteristics were very good. There is a single main spar and an auxiliary rear spar, while the wing is partly ply-covered. Mechanically operated split flaps and differentially operated ailerons are fitted. The tail group is fully cantilever and the trimming is carried out by means of tabs. In standard form the fuselage is a ply-covered box, but a steel tube structure has been designed as an alternative. An interesting feature of the training type is that the rear seat is raised to give the instructor a rather better view. In common with the increasing practice, the machine is designed to be flown from the front seat. The trainer is fully aerobatic.
Any engine up to 130 h.p. may be installed, but the performances given below are those with a 90 h.p. Cirrus Minor engine.
Weasel data:- Span, 36ft. 1in., ­length, 27ft. 6in.; all-up weight, 1,565 lb.; weight empty, 925 lb.; wing-loading, 9.1 Ib./sq. ft.; power-loading, 17.3 lb./h.p.; maximum speed, 110 m.p.h.; cruising speed, 100 m.p.h.; stalling speed (without flaps), 45 m.p.h.; rate of climb, 600 ft./min.; and cruising range, 325 miles.
Makers:- Dart Aircraft, Ltd., High Street North. Dunstable, Beds. (Dunstable 429.)

THE Weasel trainer, as developed by Dart Aircraft, Ltd., is a wooden two-seater low-wing monoplane with a tricycle undercarriage, split flaps and double fins and rudders. The pupil is placed in front of the instructor and the view from both cockpits is good. The wing is of the single-spar variety with a plywood covered leading edge to take torsional stresses. A Cirrus Minor, or an engine of corresponding power, is specified.
The company has also designed the Silver Dart advanced trainer, a low wing monoplane with an Alvis Leonides engine or any other radial of up to 700 h.p. Slots and slotted flaps are fitted and the undercarriage retracts inwards, though a fixed cantilever gear can be installed.

One of several new types which are coming along for C.A.G. training, the Dart Weasel. In this general arrangement drawing it is shown in tricycle trainer form; another version will be available with a side-by-side seater cabin layout.

The Dart Weasel is a trainer with a tricycle undercarriage, split flaps and twin fins and rudders.
<<   0/0   >>