Armstrong Whitworth F.K.8 (UK)
Subsequently nicknamed ‘Big Ack', the F.K.8 appeared in May 1916 as a large and sturdy armed-reconnaissance biplane, capable also of carrying up to 72.5 kg (160 lb) of bombs for ‘hit and run’ raids on enemy ground ДальшеMore>>> positions. Initial production aircraft, which became operational on the Western Front in early 1917, were powered by 89.4 kW (120 hp) Beardmore engines. Later production aircraft were normally powered by 119kW (160 hp) Beardmore engines in much neater cowlings with new small radiators on the fuselage sides. An unusual but much appreciated feature of the aircraft was its dual controls, which greatly improved the observer’s chances of survival.
In service F.K.8s proved capable of withstand­ing far more punishment than the Royal Aircraft Factory B.E.2s they at first replaced, and had the speed, manoeuvrability and firepower to give air­crews a reasonable chance of defending themselves. Indeed, the two VCs won by F.K.8 pilots - awarded to A. A. MacLeod and F. M. F'. West (see Chronology) - were for actions against formations of attacking enemy fighters. It is believed that more than 1,600 F.K.8s were built, serving on the Western Front, as home defence and train­ing aircraft in the UK, in the Middle East and in India. Of these, nearly 700 were on strength at the end of the war.
Interestingly, after the war, two F.K.8s were among the initial equipment of Queensland and Northern Territory Aerial Services Ltd, which was subsequently known as QANTAS. These air­craft were used by the airline to carry air mail between Charleville and Cloncurry; this represented the Australian government’s second air mail contract. The first service took place during 2 and 3 November 1922.
Data: Engine as above Wing span 13.26 tn (43 ft 6 in) Length 9.58 m (31 ft 5 in) Max T-O weight 1,275 kg (2,811 lb) Max level speed 157 km/h (98 mph) Endurance 3 h Armament one forward­firing Vickers machine-gun and one rear-mounted Lewis gun.

Leonard Clarke passes a hand-held camera to the observer of Armstrong Whitworth F.K.8 B3312, from same production batch as B3306. A fixed Williamson L type aerial camera is already attached to the fuselage by the pilot's cockpit, aimed down through the wing root cutaway. The complex undercarriage fitted here was later replaced by a simpler vee-strut unit.

During World War One 82 Squadron flew the Armstrong Whitworth FK.8 on operations in France. C8636 at Argenvilliers in mid-1918 with Captain Fagan - the pilot on the right - and Lieutenant Ely - observer, on the left

Rare flying view shows 82’s FK.8 ‘A’ on December 1, 1918, whilst being flown by Lieutenants Ramsbotliam and Boyes. 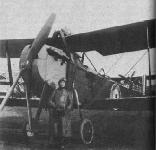 Mr Clarke poses with his aerial camera in front of Armstrong Whitworth F.K.8 B3306. The F.K.8, along with the R.E.8, was the B.E.2e’s successor, and is seen here with the original inefficient radiators which ran up the fuselage sides and met in front of the top centre section. These were later replaced by more compact elements on fuselage sides alone. Also visible in this view is the camera access hole in the fuselage by the pilot's cockpit.
<<   0/0   >>