[It is not often that FLIGHT has an opportunity to describe and illustrate aircraft designed and built in Soviet Russia. It is, therefore, with all the more pleasure that we publish below an account, written by Mr. J.Pogossky, of the ANT-9 monoplane. The description which follows, and the accompanying photographs, were sent us by the Joukovsky Central Aero-Hydrodynamical Institute of Moscow, and the writer is to be congratulated on his mastery of the English language, which is such that the article has scarcely had to be "edited" at all. As the performance figures given later will indicate, the ANT-9 is a machine which does its designer and the Russian Soviet credit. Its recent demonstration tour around Europe was very successful, and will have done much to raise the prestige of Russian aviation. – ED.]

THE C.A.H.I. ANT-9 aeroplane is the first all-metal three-engined passenger aeroplane built in the U.S.S.R. (Soviet Russia).
Before proceeding with a description of the design, it is well to mention that the construction of this large aeroplane was carried out in four and a half months, the machine being finished on April 28, 1929. The designing and the construction of the machine were carried out under the direction of Mr. A. N. Toupoleff, engineer-in-chief, who is in charge of all the all-metal aeroplane construction in the U.S.S.R.
The three-engined aeroplane C.A.H.I. ANT-9 is a cantilever-wing aeroplane, the main plane being disposed immediately over the body. In the interior of the body below the main plane is arranged a large passenger cabin, and at the forward end is the pilot's cabin. One engine is placed in the nose of the body, and the other two are in the main plane, one to the right and one to the left of the body.
The machine was built entirely of Koltchugalumin metal (tensile strength 40 kg./mm.2, elongation 20 per cent., specific gravity 2-85).

The main plane can be divided in plan into three principal parts. The middle part, which may be termed the central plane, is placed immediately on top of the body, to which it is secured by four bolts. To this part are secured the two wing engines.
The two end parts (wing tips) of the main plane, along the trailing edge of which the ailerons are disposed, are secured to the middle part. Thus for purposes of railway transportation the main plane can be dismantled into three moderately-sized parts. For convenience in transportation of the machine as a whole, the wing tips only may be dismantled, and thus the overall dimensions of the machines are so reduced in size that it can be transported even in town.
The main members of the wing structure are four trussed spars, continuous over the whole length of the span. At the points of attachment of the wing tips, the spars of the central plane are secured to the corresponding spars of the wing tips. The spars carry a number of trussed ribs spaced 1 m. apart. The covering of corrugated Koltchugalumin of 0-3 mm. thickness increased at certain places to 0-5 mm., is riveted to the spars and the ribs.
The strength of the covering is ensured by stiffening members disposed between the spars, parallel to them and riveted to the covering. This type of construction, consisting of four main spars, connected together by sufficiently strong ribs and especially by a metal covering, provides a stiff one-piece structure.
Tests have shown good results of such wings under various loadings, and the efficiency of the type of construction described in ensuring joint action of all the spars, as demonstrated by the negligible amount of torsion, observed during the tests. The body is suspended from the front and the rear spars of the plane by means of four steel angles. To the right and to the left of the body secured to the front spar of the central plane are placed the engine mountings, each fastened by four bolts, and the landing gear strut and the shock absorber. All the four wing spars are essentially similar in design. The top and the bottom booms of the spar, to which the covering is secured, consist of telescopic Koltchugalumin tubes entering into one another and dimensioned as required by the stress diagram. The inner bracing of the spar is also made of Koltchugalumin tubes. Thus the spar is a truss made entirely of this material. The members of this truss are connected together by gusset plates of Koltchugalumin sheet. As seen in one of the photographs, the gusset plates are on both sides of the truss and are riveted to web and flange members. The connections between the spars of the central plane and those of the detachable wing tips are of nickel chromium steel; the design of these connections is seen in the photograph on page 915.
A steel sleeve is slid on the Koltchugalumin tube of the boom of the central plane spar, and is fastened by rivets; into this sleeve fits a steel fitting, riveted to the spar flange of the wing tips. The steel fittings are joined together by a tapered bolt. There are such connections both in the top and in the bottom flanges of the spar; they are identical in design and differ only in dimensions.
At the point of attachment of the engine mounting struts and of the landing gear struts, the front spar of the central plans is provided with suitable steel fittings.
The leading edge of the central plane is hinged to the front spar and can be easily detached, thus making possible a convenient inspection of all the interior of the wing, and maintenance of the petrol and oil tanks disposed in the interior of the wing, and of all their piping.
In the middle part of the wing are disposed only the main fuel tanks, other tanks being placed in the wing tips. Such a disposition of the tanks over almost the whole length of the wing is of great advantage from the point of view of load distribution, and leaves the whole of the body available for passenger arrangement.
The ailerons are made entirely of Koltchugalumin and are covered with corrugated sheet metal. In the middle part of the wing, above the body, there is a spacious luggage compartment.

The body is made entirely of metal, and for convenience of description will be divided into three parts: The forward part, from the nose of the machine to the forward end of the passenger cabin, carries a detachable engine mounting made of steel tubes, and similar in design to the wing engine mounting. Aft of the engine is the pilots' cabin, provided with two conveniently arranged seats. The dual control can be disconnected at will. The vision forward, skyward, and lateral is ensured by a number of large windows. The interior arrangement of this part of the body is clearly seen in one of the photographs on p. 916.
Beneath the pilots' seats and a little in front is the forward luggage compartment. Structurally this forward part of the body, as well as the middle one, represents a truss, built of Koltchugalumin structural sections and tubes, encased by corrugated Koltchugalumin sheets of 0-3 mm. thickness The two longerons of the body, by which it is secured to the main plane, contain two main body frames. These frames are provided with steel fittings, on which are set lugs projecting from the central plane of the wing, and the entire body is kept together by four bolts.
The middle part of the body forms a spacious cabin for nine passengers. The seats are of the wicker work type and provided with cushions; they can be folded at will. If necessary, only four seats can be left, while the other five can be converted into berths, arranged in a very convenient and original manner, as it is seen from the other photograph on p. 915. At the end of the passenger cabin is a toilet room, a compartment which can be used as a wardrobe and an additional luggage compartment. The rear part of the body, from the passenger cabin to the tail, is of a construction fully utilising the strength of the metal covering. It consists of a number of lateral frames, built of Koltchugalumin tubes and structural sections, and of four longerons placed along the edges.
Between the frames are, in addition, diagonally disposed Koltchugalumin bands, Such a design, in which a load-carrying covering is stiffened by lateral frames, ensuring its rigidity and in which there are additional longerons and bands, disposed in the direction of maximum stresses, provides a structure unit capable of withstanding all the loads from the tail.

The fin, the rudder, the tailplane and the elevator are built of Koltchugalumin tubes and structural sections and are covered by Koltchugalumin sheet of 0-3 mm. thickness.
The tailplane comprises three spars. The middle spar is provided with three projecting steel lugs, which are fastened by bolts to fixed corners of the body; about this pivot the tailplane can be rotated to change its angle of incidence.
The rear spar is secured by four bracing cables (two from above and two from below) to a vertical column, which can be raised, or lowered, by the pilot.

All the three engine mountings are detachable, and are secured each by four bolts. They are identical in design, and are made of welded tubes.
A steel tubular ring is provided with special fittings, carrying the crankcase of the engine. The ring is connected to four joints braced by eight steel tubes to corresponding fittings of the wing.
This framework is redundant, but ensures a wholly reliable mounting of the engines, and is free from any objectionable vibrations. This arrangement is shown in a photograph on p. 916.

Deruluft's Whirlwind-powered ANT-9 Chaika on skis. The board beneath the front cabin window denotes the route as Moskau-Berlin.

The ANT-20 Maksim Gorkii photographed in August 1934. There are four PS-9s in the background.

One ANT-9 transport powered by two 500 hp M-17 engines was presented to Turkey and operated by the Turkish air arm. 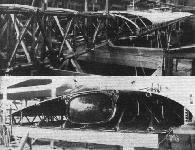 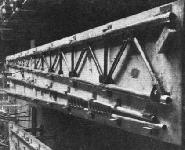 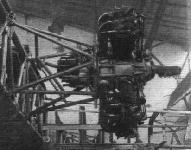 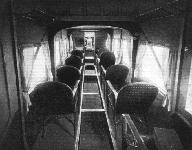 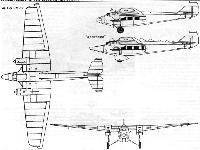