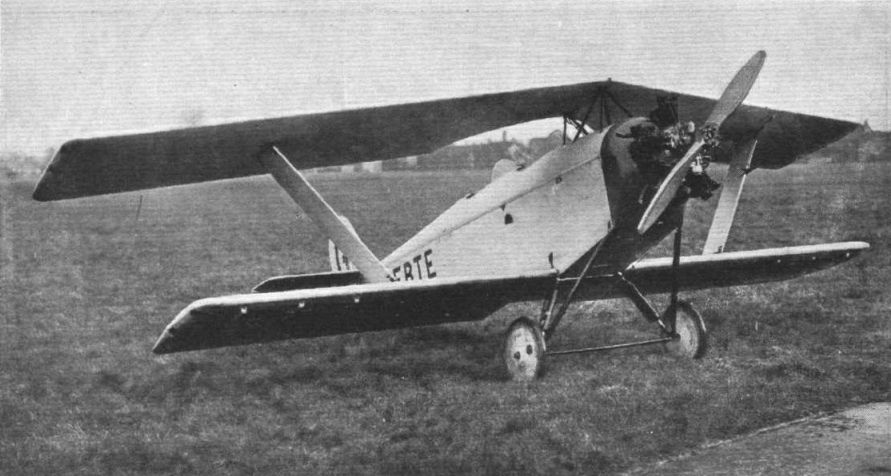 IN designing the "Imp," photographs of which were published in FLIGHT of March 29, 1928, Mr. Harold Bolas, George Parnall's chief designer, had two outstanding fundamental aims in view, simplicity and good view. An examination of the "Imp" shows that he has attained these objects. With its entire absence of wire bracing (and consequent avoidance of any need for ever trueing-up the machine once it has been assembled), its all-wood construction, and general weatherproof qualities, the "Imp" is simple enough in all conscience. And the view is probably very nearly as good as it is possible to obtain in an aeroplane of the tractor type. At the same time, the performance is approximately the same as that of other and more orthodox designs of the same power and load-carrying capacity. Put as briefly as possible, the two main objects of the design, simplicity and good view, were obtained respectively by making the wings as cantilevers, wood-planked, and by giving the top plane a pronounced sweep-back. The latter feature is clearly visible in the photographs, and particularly in the scale drawings.

THE "Imp" was produced this year by George Parnall and Co. of Bristol, and is the latest design in the light aeroplane class. The engine is the Armstrong-Siddeley "Genet" radial, air-cooled, and the machine has an entire absence of wire bracing which gives a very clean appearance. Simplicity of design and a good view have been obtained by making the wings as cantilevers, wood-planked, and giving the top plane a pronounced sweep-back.
Fuselage. - This is of orthodox construction with a light skeleton of spruce, covered with ply-wood. It is, of course, flat-sided, and has a flat bottom, but a cambered deck fairing in the usual way. The top longerons are placed rather higher than in some machines, i.e., the deck fairing forms a smaller percentage of the overall fuselage depth with the result that one has to step over the top longerons to get into the cockpits, which are roomy and comfortable. Dual control is fitted.
Wings. - The wing section employed - a modified R.A.F.31 - is a fairly thick one with its centre line curved to a medium camber. The lower wing is in one length but the top wing is built in halves, hinged to a central cabane of streamline steel tube struts. A spruce veneer covers the wings and a fabric covering is used but not doped on. Both wings are easily detachable. Ailerons run the full length of the bottom plane and are not fitted to the top plane.
Engine Installation. - The "Genet" engine is mounted on tubes and separated from the cockpit by a fireproof bulkhead, whilst the petrol tank is placed in the deck fairing ahead of the front cockpit, where it gives sufficient head for gravity feed to the engine. Thus the necessity for a centre section tank is avoided, which, in any case, would be difficult to install with the existing wing design.
Undercarriage. - This is the usual V-type with oleo and spiral spring "legs." The travel is about 5 in. and the track is wide.

THE PARNALL "IMP": Three-Quarter rear view. Note that both cockpits are clear of the top trailing edge, and that thus the view is very good.

THE PARNALL "IMP": Rear view. The raked inter-plane struts transmit the lift from the top plane to the lower, cantilever, wing. Ailerons run the whole span of the bottom plane.

THE PARNALL "IMP": Front view. The engine is an Armstrong-Siddeley "Genet." By removing the top plane, cabane and struts, the machine can be converted into a low-wing, cantilever monoplane.

A NEW LIGHT AEROPLANE: The Parnall "Imp" with Armstrong-Siddeley "Genet" engine is of somewhat unorthodox design. The top plane has a pronounced sweep-back, and the wings are cantilevers. The wing arrangement was evidently chosen so as to give a good view from both cockpits. 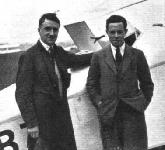 TWO "IMPS": On the right is Mr. Bolas, designer of the Parnall "Imp" which won the Balloon Bursting Competition. With him is Flt.-Lieut. Bonham Carter, who flew it.

The sole Parnall Imp, G-EBTE, an attractive two-seat cantilever biplane powered by a 80 h.p. Genet II engine. First flown in 1927, at Yate, the Imp was raced into eighth place in the 1928 King’s Cup race, flown by Flt Lt D. W. Bonham Carter - note the faired-in front cockpit. The Imp was scrapped in December 1933.

THE PARNALL "IMP" WITH ARMSTRONG-SIDDELEY "GENET" ENGINE: This aerial view, taken from a "Moth" kindly lent by the Wessex Club and piloted by Mr. Bartlett, the Club Instructor, gives a good idea of the unusual arrangement of the wings. On this occasion the "Imp" was piloted by Mr. Harold Bolas, its designer. 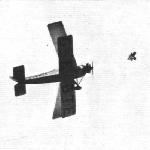 Balloon "Strafing": Flight-Lieut. Bonham Carter well on his target in the Parnall "Genet-Imp." The swept-back top plane of this machine caused an onlooker to describe it as "An 'Autogiro' with one vane seized up."

The "Pobjoy Imp": A Parnall 2-seater light biplane, equipped with the 60 h.p. Pobjoy engine, with which an air speed of 100 m.p.h. is obtained. Parts of the Pobjoy engine (which has previously been described in "Flight") are being made by A.C. (Acedes) Cars, Ltd.!

This is a general view of the machines grouped round the enclosures with the Parnall "Imp" in the foreground.

THE PARNALL "IMP" LIGHT AEROPLANE: Some Constructional Details. The engine plate is supported on a system of square tubes and angle sections, as shown in 1. The quick-release attachment of the aileron controls is shown in 2, while 3 illustrates the attachment of the interplane struts to lower plane. The same sketch also shows the general construction of the strut. The wing construction, consisting of false spars or stringers, and ribs or formers, with spruce planking, is indicated in 4, and the aileron and elevator construction in 5.