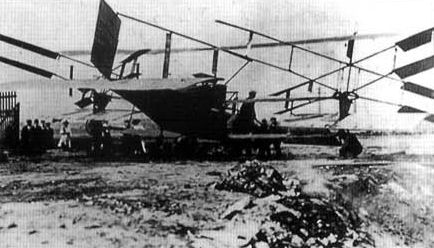 Вертолет Бреге-Рише "Жироплан" N 2 двухвинтовой поперечной схемы
The Breguet-Richet Gyroplane No. II of early 1908 was a much grander specimen than the original man-lifting Gyroplane of the previous year. If the initial machine had been little more than a 'lift demonstrator', requiring external aid to save it from toppling, the Gyroplane No. II was a far more ambitious hybrid of half-aeroplane-half-helicopter. Seen here in its initial form, the Gyroplane No. II still employs the biplane-type rotors of its precursor. Powered by a 55hp Renault engine, the Gyroplane No. II proved grossly overweight and underpowered when tested in the spring of 1908 and, clearly, required fairly major, weight-stripping surgery. This completed, the No. Ilbis as it was now known re-emerged with monoplane-type rotors and much less of its aeroplane structure. In this guise, the No. Ilbis rose to a height of 13 feet on 22 July 1908, but still lacking any real stability, was severely damaged on landing.