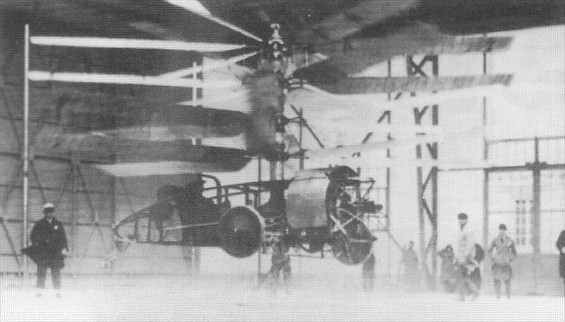 IT is now some considerable time since M. Pescara succeeded in obtaining a grant from the French Government, and he has been busily engaged upon the development of ДальшеMore>>> his helicopter. The one shown was, we believe, No. 3, and represented a considerable improvement, from the point of view of construction, on previous experimental models. The general principle of the machine is fairly simple, i.e., two four-bladed screws, one above the other, revolve in opposite directions, driven by bevel gearing from a large central tubular shaft. Each screw is built up as a biplane, with wing-warping type of control. In the present type, the power plant is a Hispano engine of 180 h.p., but so far the machine has not been tested in flight. One of the earlier models, it may be remembered, succeeded in getting off for a short while inside its hangar, and large photographs on the stand showed the machine about 2 ft. in the air.
We believe that M. Pescara looks upon the present type as a relatively crude affair, and that he has in mind for the finished product a much simpler machine, with two two-bladed screws, one below and one above a streamlined fuselage, revolving in opposite directions and without the resistance producing external bracing which characterises the machines, hitherto built. Each of these screws will be in the form of cantilever monoplanes.
A few particulars of No. 3 may not be without interest: Engine, 180 h.p. Hispano; diameter of screws, 7.2 m. (23 ft. 7 ins.); total lifting surface, 27 sq. m. (290 sq. ft.); weight of machine empty, 600 kgs. (1,320 lbs.); engine, 270 kgs. (595 lbs.); fuel, 30 kgs. (66 lbs.); useful load, 100 kgs. (220 lbs.); total loaded weight, 1,000 kgs. (2,200 lbs.).
In addition to the complete machine, a single biplane wing or screw blade was shown, in order to demonstrate the principle on which the warp control mechanism works. The angle of incidence of the blades is adjustable, not only for variation in lift, but also during each revolution in order to decrease the angle of the blade moving forward and increase the angle of the blade moving back. 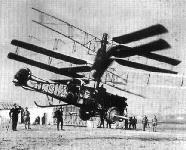 In general, World War I not only ignored the helicopter: it actually deprived it of development effort as its few proponents were diverted to do more useful things with fixed winged aircraft. However, in the wake of the Great War came a handy supply of powerful, yet cheap war-surplus engines and parts that could be put to good use. The Marquis de Pateras Pescara, Argentinian by birth but resident in France, was one who exploited the war-surplus opportunity. Having first become involved with helicopters in 1919, Pescara had built two helicopters of little significance, prior to his Pescara No. 3 that did draw attention. Fitted with a 180hp Hispano-Suiza, water-cooled engine, the machine weighed around a ton and first flew in 1923 at Issy, near Paris, where it is seen here. By January 1924, the Pescara No. 3, despite a pronounced lack of stability, particularly along its fore-and-aft axis, was capable of hovering at a height of around 3 feet and managed to remain airborne for 10 minutes, 10 seconds. The Pescara No. 3 was the first to incorporate a practical cyclic pitch control that aided stability by balancing rotor lift between advancing and retreating rotor blades. While the No. 3's engine certainly offered plenty of power, its weight, along with that of its Lamblin radiator - the barrel-like device at the machine's rear - must have contributed significantly to its one ton all-up weight.