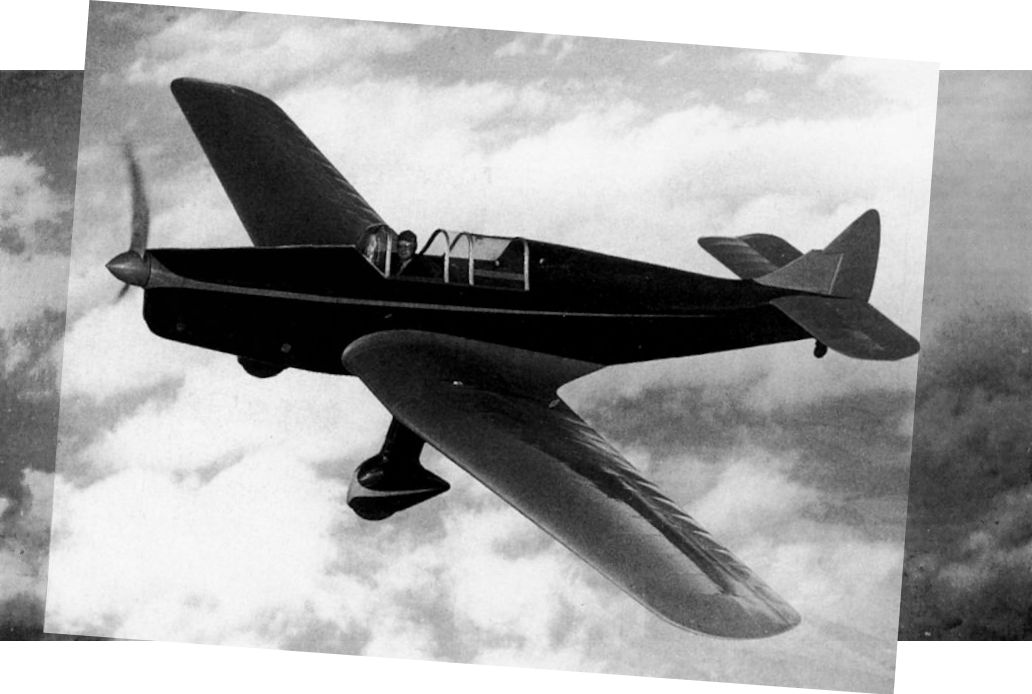 WHEN Colonel Lindbergh settled in this country he surveyed our range of touring machines, and, although unstinting in his praise, was unable to find exactly what he wanted. So, some months ago, he "went into a huddle" with Mr. F. G. Miles with a view to placing an order for a machine designed expressly to meet his requirements. The fruit of this collaboration was the Miles Mohawk, a two-seater, long-range, high-speed monoplane with a supercharged Menasco Buccaneer engine. Phillips and Powis are quite prepared to build replicas, but do not regard the machine as a production type.
To say that the lines of the Mohawk are the most attractive yet conceived on the P. and P. drawing boards is praise enough of its appearance. It is registered G-AEKN and finished in orange and black at Col. Lindbergh’s express wish, because this combination shows up most readily under all weather conditions.
It is essentially a typical Miles two-seater but differs from its forebears in its cockpits, undercarriage, tail unit and its supercharged power plant.
Structurally it is of wood and follows standard Miles practice; in fact, the outer panels of the wings are similar to those of the Hawk Major, with two spars and ply covering taking drag and torsional stresses, but with strengthened spars to take care of the greater all-up weight and a few minor modifications to permit the installation of extra fuel tanks. Miles split trailing-edge flaps are incorporated. In addition to the outboard tanks there are two in the centre section. The basic design of the wooden stressed-skin fuselage and fabric-covered tail unit does not depart from previous Miles technique, although certain members have been specially strengthened.
English eyes will soon settle on the Menasco Buccaneer B6-S six-cylinder, in line, inverted air-cooled engine supercharged by a centrifugal blower to give 200 h.p. at 2,250 r.p.m. at 4,500 ft. A detailed description of this power plant was given in Flight of September 10 this year. Incidentally, it might be useful to remember that, externally, a Menasco installation may be distinguished from a Gipsy in that the cooling air chute is on the starboard instead of on the port side. The particular engine in the Mohawk has been imported from America, but the licence for the B6-S and other Menasco models was lately secured by Phillips and Powis. The engine is mounted on blocks of Ferodo brake lining and small springs, allowing a 1/8 in. compression. For the time being the airscrew is a fixed-pitch metal Fairey, but provision has been made for a variable-pitch type. Hamiltons, incidentally, are not yet marketing a V.P. screw suitable for Menasco, although De Havillands, their English licensees, have developed successful models for engines of similar ratings.
Naturally the supercharger (driven at 8.75 times engine speed) results in a somewhat longer power unit than is normally seen in light aeroplanes, but happily Col. Lindbergh asked for rudder pedals instead of a bar so the final installation of engine and controls was made in less space than might have been imagined. An Eclipse generator and electric starter are fitted and the induction pressure is read off on a Smith's boost gauge.
The tandem seats are mounted on front and rear spars and are sheltered by as neat a transparent roof as we have seen. This roof, with its long tail fairing tapering away to the fin, is of an inverted U section merging smoothly into the maximum cross section of the fuselage and resulting in a hollow along the fuselage. Col. Lindbergh will normally fly from the front seat, with Mrs. Lindbergh behind, and the reach of the adjustable rudder pedals has been designed accordingly. Between the seats is a fixed portion of the transparent enclosure, but flexible panels immediately above each occupant meet on the centre line of the fuselage, being pushed down into the side walls for entry, exit and "open cockpit'' flying. The concave sides of the enclosure permit one eye to be put outside in bad weather, leaving the greater portion of the face sheltered. A capacious luggage locker with a recess for suitcases is located behind the rear seat, and is accessible both from the cockpits and the starboard side of the fuselage. Behind this is stowage for a tent, a 10 lb. collapsible dinghy and similar articles which might prove of value on journeys in inhospitable regions. The backs of the seats can be removed and laid flat to form with the seat bottoms a make-shift bed.
The dual flying controls are conventional, but incorporate a patent Miles tail trimming device. At low speeds the elevator tabs become comparatively ineffective, so the operating gear is planned to adjust the tabs in the normal way at high speeds and at low speeds, for landing, to load the evelator control.
The undercarriage is a single-strut type by Lockheed, incorporating brakes and Airdraulic struts. In view of the fact that this type has also been adopted on the new version of the Hawk Trainer, it may be deduced that future Miles designs using fixed undercarriages will be equipped with something similar. A Short float undercarriage has been designed, and is particularly noteworthy in that there are no cross struts. Large fairings cover the groups of attachment struts.
Among the items of equipment introduced at the express wish of Col. Lindbergh are three parachute flares mounted horizontally in the rear end of the fuselage. These flares are made by the International Flare Signal Co., of Tippecanoe City, Ohio, U.S.A., and are fired electrically from the sides of the machine, travelling about 40ft. before blossoming out. The great advantage of this type of installation is that the flares do not lose altitude before giving their light and do not tend to vibrate out of the machine.
Complete performance figures have not yet been taken, but the maximum speed is believed to be in the immediate neighbourhood of 200 m.p.h. With the ample wing area and the Miles split flaps the landing speed should be quite low.

The Mohawk on test, showing the front cockpit open.

Custom-built for Charles Lindbergh was the Miles Mohawk G-AEKW, seen here at Heston in 1937. It was finished in black and orange colours.

Attractive in appearance as well as performance the Mohawk will doubtless become the envy of many a private owner.
The photograph shows the same aircraft at Woodley with the incorrect registration G-AEKN applied instead of G-AEKW. It is rumoured that the aircraft still exists. 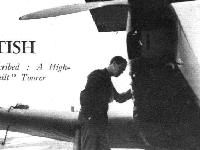 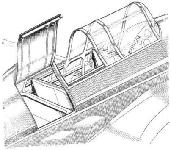 There is a large luggage locker behind the cockpit enclosures on the Mohawk. The flexible transparent panels over each seat can be pushed down into the fuselage sides.

The installation of the supercharged Menasco Buccaneer engine. Note that the cooling chute is on the starboard side.

A single-strut Lockheed undercarriage is fitted to the Mohawk.

The neat installation of the Mohawk's swivelling tail wheel.

General arrangement of the Mohawk, including a side elevation of the float undercarriage.
<<   0/0   >>