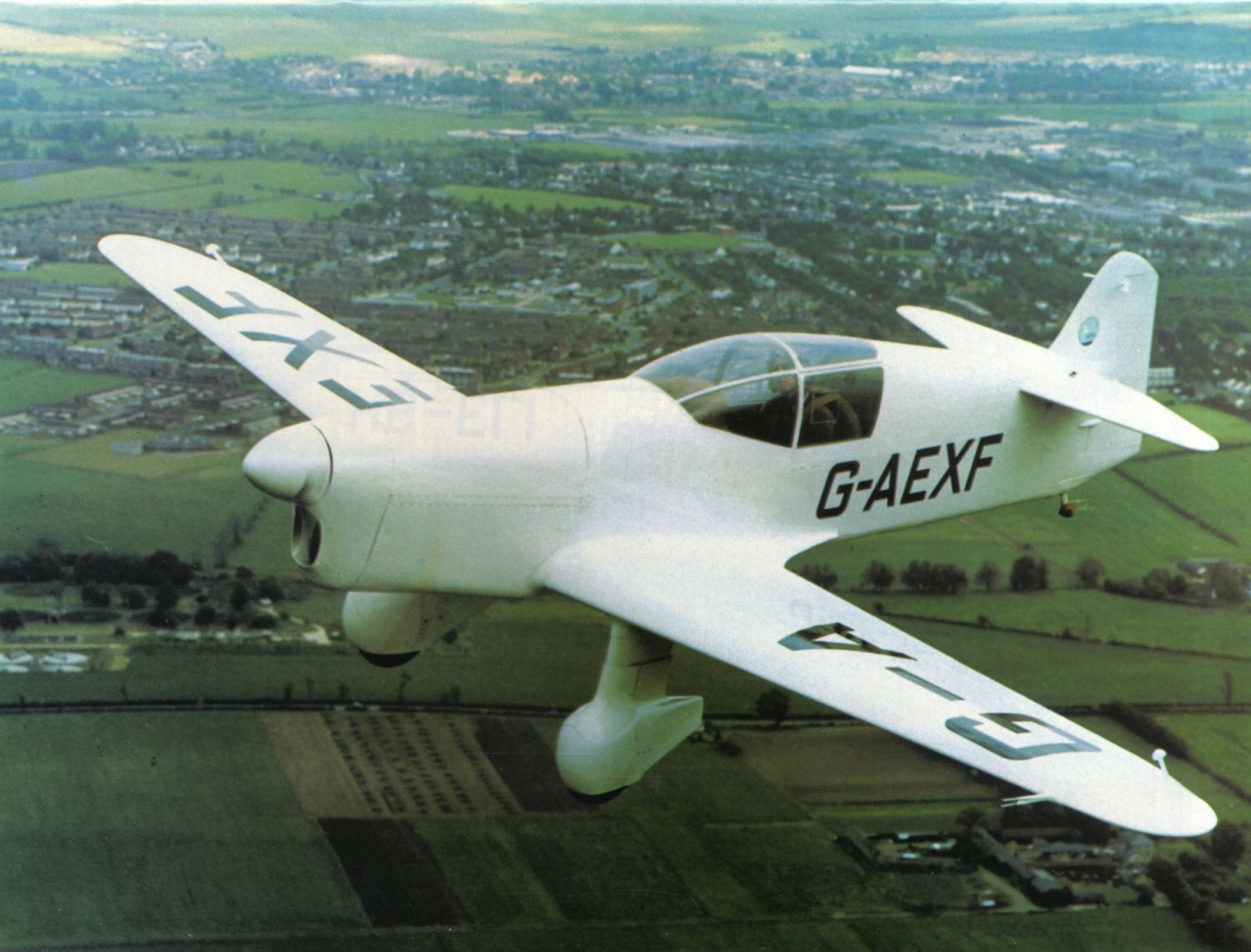 WHAT is probably the fastest British aeroplane of its size and power, the Percival "Mew Gull," was demonstrated for the first time at Gravesend aerodrome on Thursday of last week, when Mr. E. W, Percival flew his latest machine in a gale of wind before a number of press representatives who had travelled down to Gravesend in a coach placed at their disposal by Mr. Percival and the Napier company. On the way down the talk, not unnaturally, turned to the likelihood or otherwise of Mr. Percival flying the new machine in the high wind, gusty at that, which blew over Kent on that day. Doubts were soon allayed, however, when the party arrived at Gravesend, for no sooner had Mr. Percival greeted the visitors than he donned his parachute, got into the machine, taxied down wind without anyone hanging on to the wing tips, turned into wind, opened the throttle and was off. It was a display of sang froid which one has rarely seen equalled. The wind blew probably at 40 m.p.h. at least, gusting to 55-60 m.p.h. On Gravesend aerodrome one had some difficulty in making oneself understood owing to the wind. The strong wind helped the take-off and subsequently the landing, it is true, but the gusts gave Mr. Percival an opportunity to find out very early in the flight how the new machine responded to the controls. As far as could be seen, neither ailerons nor elevator need ever be used to their full extent, and ample reserve of control appeared to be available throughout.
After taking the machine "upstairs" to try it out at little in the slightly steadier air, Mr. Percival came down and flew across the aerodrome, first down-wind and then up-wind, for the benefit of the photographers, There was no doubt that she was fast. Exactly how fast was difficult to judge in that high wind. A tiny machine is always apt to look faster than it is, while a large machine often looks slower than it is. Bringing the machine in somewhat fast (quite wisely in that gusty wind) Mr. Percival made a very good landing, turned down-wind and taxied in, apparently not bothered by the gusts. The rather high wing loading helped, of course, and a lightly loaded machine would certainly have been blown on to a wing tip.
After the well-merited applause had died down, the party sought the shelter of the very comfortable club house at Gravesend, where refreshments were served. During these we were able to get a few details from Mr. Percival concerning his latest machine.
Designed by Mr. Percival himself, and built in his experimental works at the Gravesend aerodrome, the ''Mew Gull," as the new machine is called, is a low-wing cantilever monoplane of wood construction, fitted with a Napier "Javelin" engine of about 165 b.h.p. The machine is intended for the private owner who is a good enough pilot to fly it, and who wants to be able to make prolonged tours at high speed, for the carriage of press photographs from distant parts of Europe in a minimum of time, or possibly for carrying relatively small quantities of valuable and urgent mails.
In general design the "Percival" resembles somewhat the "Gull," with which Mr. Percival has had such considerable success, but differs in being a single-seater, and in having the pilot's cabin placed very far back, in fact almost in the tail. In spite of this placing of the seat, the view is by no means bad. This is partly due to the use of an inverted, in-line engine, and partly to the fact that the cabin roof is raised a considerable distance above the decking in front of it. From a drag point of view, it is quite likely that the arrangement is good. The critical part of a streamline form seems to be that just aft of the maximum cross-section, as far as excrescences are concerned, and by moving the windscreen well aft, the cabin merges into the tail very neatly.
With a wing span of only 24 ft., a length of but 18 ft. 3 in., and a wing area of 78 sq. ft., the "Mew Gull" is a very small machine. Yet its cabin is by no means unduly cramped. In the deck fairing towards the tail is a luggage locker, which will take quite a large suit case, if the machine is used for touring, or a fairly bulky parcel of mails or press plates or photographs.
The petrol tank is in the fuselage, between the cabin and the engine, and holds sufficient fuel for a flight of rather more than three hours. As the machine will probably cruise at about 175 m.p.h., the range is approximately 550 miles. The Napier "Javelin" engine has been used with success in several of the Percival "Gulls," and is the power plant chosen for the "Mew Gull." It drives a Fairey metal airscrew.
With a gross weight of 1,460 lb. and a wing area of only 78 sq. ft., the "Mew Gull" is naturally not a beginner's machine, but in the hands of a good pilot it should be capable of giving a good account of itself. One can, of course, be fairly certain of seeing several in the King's Cup Race. One would like to see it in the Coupe Deutsch, but the Napier engine is just a little over the 8 litres permitted, although by the use of liners the capacity of the "Javelin" might be brought down to the required capacity.
The tare weight of the machine is 996 lb., and the load consists of the following:- Petrol 227 lb.; oil 25 lb.; luggage 50 lb.; pilot 162 lb.

Although essentially a racing and sporting type, the Percival Mew Gull can also be used for fast mail carrying or fighter-training work. Even with a range of 860 miles the payload, in addition to the pilot, is 483 lb. The Mew Gull is a low-wing cabin single-seater with a Series II Gipsy Six engine and v.p. airscrew. The figures below are for the type E.2H, which is the standard, as opposed to the racing version.

The Mew Gull is a high-performance single-seater cabin monoplane suitable for use as a high-speed tourer and a light mail carrier or high-speed trainer. Two versions are made, the type E.3.8 having a top speed of 245 m.p.h. and a rate of climb at sea-level of 1,800ft./min. It carries a payload of 208 lb. for 900 miles.