SAFETY FIRST
The Scheldemusch Pusher to be Made in this Country: Interesting Flying Characteristics: "Tricycle" Undercarriage

ALTHOUGH the machine itself is extremely interesting as an example of the result of a very serious attempt ДальшеMore>>> to produce an aircraft which can be flown with safety by almost any pilot - or even a non-pilot - the most interesting feature of the Dutch Scheldemusch is its undercarriage. From time to time the three-wheeled undercarriage has made its appearance, the most recent examples being those of the various U.S. Bureau of Air Commerce machines, the Cowey-Eugster and that to be fitted to the Douglas D.C.4. In each case the reasons and effects are slightly different, but in the first two they are primarily those of simplifying the landing business for the novice pilot.
The idea of making contact with the ground necessarily at an angle of maximum lift has always appeared to be somewhat illogical, particularly where low stalling speeds are concerned, and any machine which has been designed for the absolute novice should necessarily be arranged so that a good many liberties may be taken with it near the ground. In the case of the Scheldemusch, or Scheldt Sparrow, the centre of gravity is ahead of the main undercarriage, and the elevator control has been limited so that it is virtually impossible to make an incorrect landing unless the machine is brought in at an unreasonably high speed.
If a semi-three-point landing is attempted the machine merely pivots on to its nose as soon as the ground has been touched, while if the machine is glided slowly into the ground it continues in a horizontal direction and does not "balloon" up again. The Scheldemusch undercarriage has a vertical movement of nearly six inches and is capable of taking a considerable vertical stress; its front wheel is steerable, so that the machine is as manoeuvrable on the ground as one could possibly wish.
Basically, the Scheldemusch is a very normal pusher biplane with a pronounced dihedral, H.P. slots, differential ailerons, and a boom tail. The single-seater fuselage - or, as it used to be termed, nacelle - is of welded steel tube construction, while the wings are two-spar wooden structures. In these days of low-powered machines it may be considered as powerful for a single-seater, the engine being a flat-twin Praga B. of 40 h.p. For some reason or other the noise of the engine is more pronounced in the cabin than it should be, and from the pilot's point of view this is the only criticism I have to make. The view in the forward hemisphere is extremely good, since, in level attitude, the top of the scuttle is very well below the horizon.

With the centre of gravity so far forward it might be expected that the take-off would be interesting. In fact, it is not possible to leave the ground until the speed is quite high, and the machine then climbs very strongly indeed. To the pilot it first appears as if nothing in the world will make it leave terra firma, and then, quite suddenly, with the stick held only a little aft of neutral, the nose lifts and the machine leaves the ground in quite a steep climb.
The fact that there is no fuselage means that the Scheldemusch turns almost exclusively on the rudder, and the stick is used merely to keep up the nose.. Extraordinarily steep turns can, in fact, be made without touching the stick, and it was interesting to discover that the machine would sideslip to a useful extent, though the speed could not be kept well down in this manoeuvre. However, it is not a very clean machine and any excessive speed is lost as soon as the nose is raised. For this reason the approach should be a very simple matter to the uninitiated; one simply points the machine at the part of the aerodrome where the landing is to be made and levels off, very roughly and in the old-fashioned manner, when the blades of grass can be distinguished. If the hold-off is made high the machine simply sinks into the ground and stays there, and if it is not made at all the results appear to be equally undisturbing.

Mr. T. E. Slot, the designer, has a very remarkable repertoire of demonstration tricks near the ground which adequately show that the machine - at least with the engine working and in the hands of a pilot who knows it well - can be pushed about the air in a manner which is quite terrifying to the uninitiated. After watching one of these demonstrations I elected to do much the same sort of thing, but at a safe height of 1,500ft. When stalled as far as possible, engine on or off, the nose merely rises and falls against the horizon, and aileron control, though weak, remains there all the time. Within the inevitable reason, the Scheldemusch is foolproof. Probably if a pilot had the temerity to dive it steeply and then pull it up equally violently with full rudder one way or another it could be forced into something resembling a spin - though this, I was told, is merely a controllably steep spiral.
The position of the pitot head just above the centre-section in the demonstration machine was not conducive to accuracy, and the readings below 100 km./h. were certainly far from correct. The official figures are given in the table on this page. Three minutes' flying without noticeable loss of height on the metric altimeter and at an engine speed of 2,200 r.p.m. showed an A.S.I, reading of about 110 km.h. (68.5 m.p.h.). The machine, in any case, is designed for safe rather than for fast flying.
Arrangements have been made for the manufacture and sale of the Scheldemusch in this country by Aircraft Constructions, Ltd., of Sidcup, Kent, and the price over here will be in the region of ^300. The manufacturers, N. V. Koninklyke Maatschappy "De Schelde," produce a miniature flying-boat which might interest a few owners. Perhaps in due course we shall see that.
H. A. T.

On all threes: The pusher on the ground, showing the 40 h.p. Praga flat-twin engine.

Designed for safety. The Dutch Scheldemusch pusher, which, in addition to a tricycle undercarriage, is full slotted and has its elevator control limited both to make an unintentional stall almost impossible and to prevent take-off until plenty of speed has been gained.

The Scheldemusch about to adopt one of the unconventional attitudes which it can assume quite near the ground with equanimity. The Handley Page slots are just beginning to open.

This photograph of the Scheldemusch is unusual in depicting an aeroplane with three slots, one on each wing tip and a third at the controls! Mynheer Slot, the designer, was the pilot. 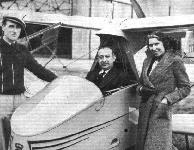 Mr. T. E. Slot, the designer, in the cockpit of the Scheldemusch. On the left is Mr. R. G. Doig, managing director of Aircraft Constructions, Ltd., who are to build the machine in this country. On the right is his business partner, Miss I. Robins.

"Getatability": The nose of the Scheldemusch's nacelle is quickly removable to give access to the instruments and controls. 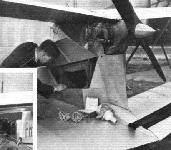 The baggage bag - a rather surprising piece of accommodation disclosed by the opening of a panel in the Scheldemusch.

VIDAL-INSPIRED? Safety (and perhaps comfort) at the expense of performance seems to be the idea behind this Dutch effort, recently tested at Flushing, Holland.
<<   0/0   >>