TOWARDS THE "FOOLPROOF" IDEAL
The Hammond Model Y: A Two-seater "Pusher" for the U.S. Department of Commerce

ABOUT a year ago Mr. Vidal, of the U.S. Department of Commerce, startled the American aircraft industry by stating that he believed that there was a market for 10,000 easily flown, safe aeroplanes, provided they could be sold for 700 dollars each. It subsequently appeared that he might be granted a fund to assist him in proving the truth of his contention, but the money was not forthcoming, and so he called for bids on twenty-five small economical aircraft to replace the machines in use by inspectors of the U.S. Department of Commerce. Last month a contract was awarded to the Hammond Aircraft Company, of Ypsilanti, Michigan, for fifteen of the originally specified twenty-five at a cost of 2,190 dollars each.
According to Western Flying, it was stipulated that the machine to be ordered must be capable of clearing a 35-foot obstacle 800 ft. from a standing start; that it must be capable of being brought to a stop within 400 ft. of the same obstacle, cleared in a straight and controlled glide by a private pilot; that no movement of the control or sudden loss of power should cause either a spin or a steep recovery dive; that the undercarriage should withstand a landing with a vertical velocity of twenty feet per second; that both pilot and passenger should have an uninterrupted view; and that the machine should be capable of being brought to a stop in 150 it. from a ground speed of 45 m.p.h.
The Hammond Model Y will resemble few aeroplanes that have been produced during the past few years - with the exception, perhaps, of the Stout "Skycar." It will be a low-wing three-wheeled "pusher" cabin monoplane of all-metal construction with the pilot and passenger seated side by side. The tail will be carried on two booms and the engine specified is a four-cylinder inverted Menasco.
But it is in the three-wheeled undercarriage that the real interest lies. By arranging two normally braked wheels, braced through the wing by four struts to the cabin top, and an additional fully-castoring wheel in the nose, a number of operational advantages should be obtained, the most noticeable of which will be the ability to use the brakes really hard at all speeds without nosing over.
It is claimed also that the gliding angle can be made very steep for landing in small spaces, and that the actual landing can be made simply by pulling tho stick back. In any control position it will be impossible to stall the machine.
A good, but not exceptional speed range is promised - 35 to 110 m.p.h. Demonstrations will be made in March next year.

SIMPLICITY from the STATES
Flying Impression of the Stearman-Hammond Pusher: Tricycle Training for K.L.M. Pilots. By “Indicator”

AS one of the first machines to be designed and built round the tricycle principle, and certainly the first to be seen in Europe, the Stearman-Hammond Y can hardly be laughed aside as a mere experiment of no particular consequence. The example bought by K.L.M. was demonstrated at Croydon late last year and was described in Flight of November 18. Unfortunately, on that particular day, Customs’ arrangements then prevented any interested person, however obviously a non-buyer, from riding in the machine (and certainly from flying it), but K.L.M. and the Netherlands authorities generally, rather less entangled in red tape, recently provided me with the necessary facilities at Schiphol aerodrome, Amsterdam. Which, in view of the fact that neither is actively interested in the sale of the machine, was particularly altruistic of them and in keeping with a co-operative spirit which is not, unfortunately, by any means universal even in the flying world.
At Schiphol the Hammond was entirely in its element, since the full effect of a good tricycle arrangement can best be appreciated on asphalt runways. The work of flying the machine consisted simply of (a) taking-off by driving it along the runway until a certain pre-determined speed was showing on the A.S.I., pulling it firmly off and trimming in due course to level flight; and (b) landing by gliding it straight in on to the end of the chosen asphalt strip and applying the brakes just as vigorously as one felt inclined. During this crash stop process (carried out by a K.L.M. pilot by way of demonstration and leaving two black lines on the white surface of the runway) there was little or no tendency for the machine to swing ofl the straight course.
Probably the non-pilot, sitting in the machine for the first time, would, with a little verbal assistance, put up as good a show as anybody else. There is the Hammond's slight weakness, because the majority of the people who are interested in it are those who have already learnt to fly and certain things must immediately be unlearnt. How­ever, after five minutes or so my feet forgot to clamour for the non-existent rudder control, and a natural instinct to hold off in the conventional manner had already to some extent been overcome in previous tricycle experimentations.
By way of learning exactly what might happen, I did my best, on the first landing, to pull off a full three-pointer. The Hammond managed a half-hearted wheeler and remained poised with the tail in an intermediate position for perhaps two seconds; then the outfit sank gently forward on to its nose-wheel. For the benefit of those to whom the Hammond control arrangements are un­familiar, it should be explained that there is no rudder control, turns being made on the ailerons alone, and my interest in the conventional landing was largely that of discovering whether, during the short time in which no directional control was available, the machine would swing momentarily one way or the other. It carried on in a rigidly straight line during those two interesting seconds.

THE HAMMOND AGAIN: This is the production version of the Hammond Y, one of the "fool-proof" designs which have been built to the U.S. Bureau of Air Commerce orders. It was originally described in Flight of December 6, 1934, and the revised model is reputed to have a maximum speed of 123 m.p.h. The engine is a 125 h . p . Menasco, which may yet be produced in this country.

ALL IN ONE: Three very modern features appear in the latest version of the Stearman-Hammond "Y" monoplane. A tricycle undercarriage for glide-in landings and ground manoeuvrability; the pusher arrangement for comfort and forward view; and all-metal construction for ease of maintenance. With a Menasco C.4 (125 h.p.) engine the maximum speed is 120 m.p.h., the landing speed is 40 m.p.h., and the cruising range 550 miles. An example of the Stearman-Hammond is at present in Holland and it may shortly be seen in England. N. V. De Schelde, of Vlissingen, hold the European rights for this singularly interesting machine.

Stearman-Hammond Y-1 PH-APY had been acquired by KLM as a tricycle undercarriage trainer for its prospective fleet of Douglas DC-5s, but was sold to the British Air Ministry and used by the RAE from the summer of 1939 with the military serial R2676. Fitting the Whittle W.1 unit would have presented something of a challenge!

If the position of undercarriage legs in this ground view of the Hammond is compared with that in the flying pictures, the amount of movement will be appreciated; the tricycle type of undercarriage permits an almost unlimited travel since the ground angle need not be considered. Ease of entry into the cabin is an obviously good feature of a machine on pusher-tricycle lines.

A result of close application to private-owner problems: the American Stearman-Hammond Y with Menasco engine. It was one of the first "modern" machines to have a tricycle undercarriage.

A good impression of the general lines of the Stearman-Hammond can be obtained from this aerial view which was taken immediately after the Croydon demonstration.

Flying view of the Hammond taken during the machine’s short visit to this country last year. The one-piece flap extends between the tail booms, which must, incidentally, have given the designers food for thought while working on the layout of the elevator controls. The rudders are fixed.

Though unconventional, the appearance of the Hammond is not displeasing. In the picture of the take-off, the amount of undercarriage movement can be realised when the position of the wheels is compared with that in one of the two sketches on the following page.

Past and Future: A striking impression of the Stearman Hammond and one of K.L.M.’s D.C.2s on the tarmac at Croydon. The Hammond is, of course, being used to accustom the company’s pilots to the tricycle technique in preparation for possible operation of Douglas D.C.4s in due course. The Hammond is, how­ever, primarily interest­ing as a private type - or as the basis of future private types.

First Officer Steensma, who flew the machine over. It is the custom of K.L.M. to give the younger pilots every possible chance of showing what they can do and of gaining new experience. Steensma has, in fact, so far done all the flying with this machine for K.L.M.

Two-control in practice. Inside the cabin of the Stearman-Hammond, in which the wheel is used for steering both on the ground and in the air, through the medium, respectively, of the nose wheel and the ailerons. The machine has no movable rudders.
The large lever extending from the floor boards operates the flaps - a pedal providing an additional 20 degrees of movement for gliding angle and/or speed adjustment. The little crank on the control column provides the fore and aft trim adjustment and this column may be swung over for right-seat flying. 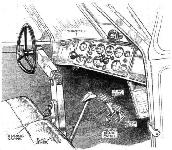 A sketch showing the control and instrument layout; this sketch, when seen beside the photographs, also gives an idea of the range of forward vision provided for the occupants.

A castor nose wheel allows the fullest use to be made of the wheel brakes of the Hammond Model Y. This photograph is of a model.

TOWARDS THE IDEAL: In Flight of December 6, last year, a new type of pusher for private owner use was described. This machine the Hammond Model Y, was designed to the order of the U.S. Bureau of Air Commerce, and its various novel features can be gathered from this sketch.

Nose-wheel, windscreen and air-scoop for the pusher engine. The centre section of the screen is movable for ventilation or for bad-weather flying. 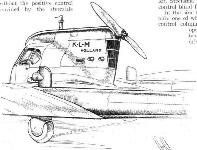 In spite of its high position the Menasco engine is very neatly cowled. The structure on the roof air-scoop carries the pitot head and venturi.

The position of the twin rudders of the Stearman-Hammond is set, but is adjustable on the ground. The trimming tab can be seen on the trailing edge of the elevator, which is in the "down" position.
<<   0/0   >>