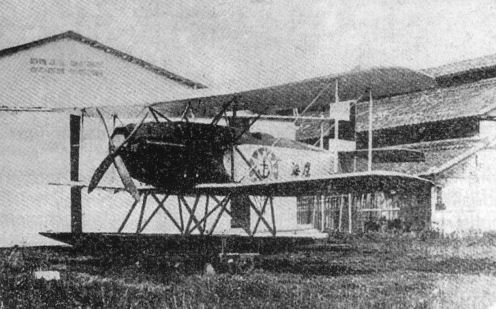 <...>
Type "Ding." - This type of machine, one of the newest, is a bombing and torpedo plane. It is fitted with a 360-h.p. Rolls-Royce engine, but provision is made for ДальшеMore>>> the installation of an engine of greater horse-power when so desired. Its total weight is 5,300 lb., with a military load of 220 lb. In its general method of construction it is similar to Type "Wu," except that the two floats are supported on separate and independent structures with clear space between them to permit a torpedo to be slung under the fuselage and launched without hindrance.
Provision is made for two cockpits and a cabin in the fuselage. The pilot's cockpit is under the trailing edge of the upper wing, where there are two side-by-side seats. Behind this is the gunner's cockpit. Between the pilot's cockpit and the engine compartment is the cabin for the bomber. This is built of generous dimensions with a trap door and bombing gear installed.
When used for passenger carrying, four persons can be comfortably accommodated in the cabin, the head room of which is sufficient for persons of normal height to stand upright. Entrance to the cabin is effected by a door on each side of the fuselage, while a third or emergency door is fitted on the roof. Large windows are fitted on both sides of the cabin, affording exceptional vision.
When long-distance non-stop flights are to be made, one or more large reserve fuel tanks can be installed in the cabin. The normal cruising range is six hours. Overall dimensions of the machine are: Span, 46 ft.; length 36 ft. 9 in.; and height, 17 ft. 4 in.
<...>