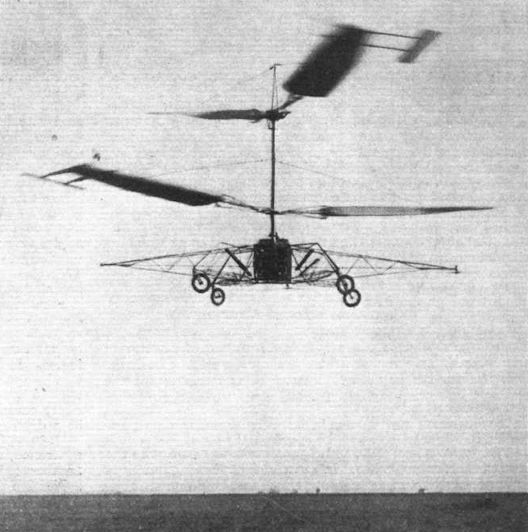 THROUGH the courtesy of Lt.-Col. P. F. Bitossi, Air Attache to the Italian Embassy, we are able this week to publish an illustration, and a few particulars, of the Italian D'Ascanio ДальшеMore>>> helicopter, which recently; broke the existing helicopter records for endurance, distance and altitude.
The D'Ascanio helicopter, which is still in the experimental stage, has already accomplished several successful nights at the Ciampino Nord Aerodrome, both in the open and inside the airship hangar there. As will be seen from the illustration, it consists of a cruciform framework fuselage surmounted, in the centre by two large horizontal "propellers," rotating in opposite directions. The blades of these "propellers" take the form of aerofoils, complete with tail elevator (at the outer tip), and jointed at the roots, so that they are free to take up, automatically, any angle of incidence determined by the tail elevators.
Thus, by operating the tail-elevators, the pilot can vary the angle of the blades, thereby controlling the ascent and descent of the machine. The propellers, it may be mentioned, are used as "parachutes" should the engine cease to function.
Horizontal flight is obtained by inclining the machine in the direction one wishes to take, which is achieved by means of small horizontal propellers mounted on the fuselage extremities.
The machine is a single-seater, weighing about 800 kg. (1,764 lb.), and is fitted with a 95-h.p. Fiat A.50 S. engine. During the tests at the Ciampino Aerodrome, the machine took off from and landed in the same space, a circle of only 15 m. (49 ft.), and maintained a steady, hovering flight at an altitude of over 4 m. (13 ft.) for a considerable period. Then, at a given signal, the machine descended and effected a safe landing. It subsequently flew in a closed circuit of 1 km., and from one end of the aerodrome to the other, thus securing a world's record (helicopters) for distance in a straight line.
The endurance record was also secured with a flight of 8 min. 45 1/4 sec, while the record for altitude was obtained with a height of 18 m. (59 ft.).
This helicopter also carried out further demonstration flights inside the airship hangar, where, in spite of disturbing air eddies, produced by the presence of the hangar walls, the machine performed evolutions in all directions, remaining aloft for several minutes. During some tests, the pilot let go all controls, and the machine remained perfectly steady.
Up to the present, the flights carried out with this helicopter have been made only to demonstrate the soundness of the principle, and with the valuable data thus collected, the designer states that the next machine will be able to demonstrate its practical use.

AN ITALIAN HELICOPTER: An interesting photograph of the D'Ascanio helicopter in flight at the Ciampino Nord Aerodrome.