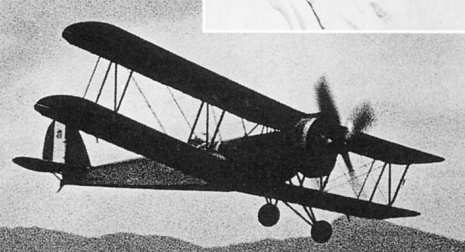 ITALY'S recapture of the altitude record proves once again the worth of the method used by that country of training pilots in special schools for special purposes. ДальшеMore>>> The world's speed record, still unbeaten, was established at the school in Desenzano, where regular high-speed experiments and classes are held each year. The long-distance navigation school at Orbetello proved equally successful by organising the two mass flights of Marshal Balbo and his squadron across the South and North Atlantic. For the most part the credit for breaking the world's altitude record is due to the high-altitude school at Guidonia.
The new world's height record of 51,348 ft. was established on May 7 by Lt.-Col. Mario Pezzi, who commands the Guidonia school, on a Caproni 161 single-engined biplane powered by a Piaggio P.XI R.C.73 fourteen-cylinder double-row radial. The previous record held by Sqn. Ldr. Swain in the Bristol 138 monoplane has thus been beaten by 1,417 ft.
In the Caproni 161, the cockpit is open, but the pilot wears a special airtight electrically heated suit made of rubber and fabric, reinforced with light alloy sheets. His head is enclosed in a large light-alloy cylinder with heated glass windows.
The 161 is derived from the Caproni 113 which held the world's altitude record previous to Sqn. Ldr. Swain's effort on the Bristol. The biplane arrangement was chosen because of its light structure weight. It is claimed that the machine has a safety factor of well over six, can perform aerobatics and fly inverted. The fuselage and tail unit are of steel tubular construction, but the wings are of wood, the whole machine being fabric covered. The Piaggio XI R.C.72 delivers 710 h.p. at 23,600ft., and 140 h.p. at 46,000ft. It is fitted with a down-draught carburettor and automatic mixture control. For the record attempt the compression ratio was increased so that the theoretical power at ground level was more than 1,800 h.p.

The Piaggio two-row radial of the Caproni 161 drives this enormous four-bladed airscrew.

RECORD BREAKERS ON SHOW: Among the exhibits at the Milan International Aircraft Exhibition, which opened on October 12, are the Macchi-Castoldi which did 440.67 m.p.h., the Cant. 501 seaplane which recently flew 3,104 miles non-stop, and what appears to be a two-seater version of the Caproni biplane which holds the altitude record. The monoplane in the background is the new Potez light transport.

The pilots of the RAQ pose beside the Caproni Ca.161. Capitano Aldo Oddono, second from left, was the only pilot to fly the AQV. Other members of the group include Maggiore Tomaso Lomonaco, the doctor who oversaw the physiological aspects of the high-altitude programme (third from left) and pilots Tenente Colonello Mario Pezzi (second from right) and Maggiore Nicola Di Mauro (furthest right).
<<   0/0   >>