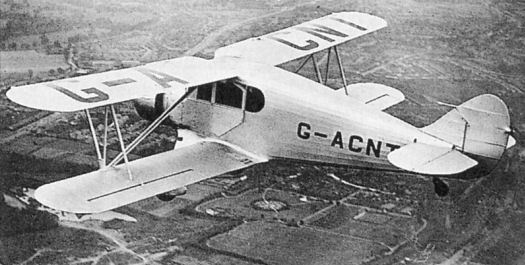 THE AVRO "COMMODORE"
Car comfort, an ultra-reliable engine, a modest power expenditure, and a performance which should satisfy a very large number of purchasers, are the main features of the latest Avro machine

TO the large range of types produced by A. V. Roe & Co., Ltd., has recently been added a cabin biplane 4-5 seater with Siddeley "Lynx" 7-cyl. radial air-cooled engine. A photograph of this machine, the type 641, was published in FLIGHT of May 10. It has now become possible to give a detailed description of the Avro "Commodore," as the type has been called. The machine is a heavily-staggered cabin biplane of metal construction, in the design of which the aim was comfort and robustness rather than high performance. Realising that in a single-engined machine likely to be used for extensive tours at home and abroad, engine reliability would be of vital importance, the power plant chosen for the "Commodore" was the Siddeley "Lynx" of 215 b.h.p., one of the most reliable aero engines ever produced. As comfort was the primary object, the conduite interieure arrangement of the cabin was adopted, and by using the very pronounced wing stagger familiar from other Avro types, the view from the cabin has been made exceptionally good, notwithstanding the large N.A.C.A. cowling ring which surrounds the radial engine.
As an example of progress, it is of interest to recall that A. V. Roe & Co. was the first British firm to produce a cabin machine. This was a monoplane with Viale radial air-cooled engine, and was first flown by the late Lt. Parke, R.N. It was followed, in 1912, by a biplane fitted with a 100-h.p. Green four-cylinder water-cooled engine, and was designed for the Military Trials held on Salisbury Plain that year. A sketch of the 1912 machine is given on p. 533. For streamlining that ancient machine was probably at least as good as the modern version, but the view was certainly very restricted, the drop-deck in front of the pilot not having been thought of in those early days. On this machine Lt. Parke got into what was at the time referred to as a spiral dive. Nowadays we know that he got into a spin, and only extricated himself by accident after trying all sorts of control movements, the nature of the spin being then quite unknown, and the method of getting out of a spin not being discovered until later.
Structurally the Avro "Commodore" follows standard Avro practice, the fuselage having a primary structure composed of welded steel tubes, and the wings having spars formed from corrugated strips, carrying metal ribs. The covering of fuselage and wings is doped fabric, and in the case of the fuselage the fabric is supported on longitudinal stringers of wood carried on light wooden formers.
A somewhat unusual bracing arrangement has been adopted for the wings. These are of biplane form and very heavily staggered, so that the rear spar of the top plane is vertically above the front spar of the lower plane. A single "N" strut is fitted in the gap on each side, and the lift and anti-lift wing bracing is in a single plane. In order to reduce maintenance rigging to a minimum the anti-lift member is a streamline steel strut of large dimensions, through the centre of which passes the lift wire. At first sight this very simple arrangement appears incomplete, but actually the wing structure is completely stabilised by the attachments to the fuselage at the inner end, and by the "N" struts at the outer end of the bracing. With biplane wings so heavily staggered it is virtually impossible to arrange for wing folding, and in the Avro “Commodore" no wing-folding arrangement is provided.

The undercarriage is of the split type in which the wheels are carried on short stubs on large-diameter telescopic tubes. The telescopic tube and sloping bracing strut are streamlined into a common fairing, and spats are fitted over the wheels. The lateral bracing of the undercarriage is very simple and consists for each leg of a single streamline steel strut running to the centre of the bottom of the fuselage. At its outer end this strut attaches to the outer member of the telescopic leg, so that there is no lateral displacement of this when the wheel moves up and down. The price paid for this absence of lateral movement is the slight overhang, say, 6 or 8 inches, of the lower portion of the telescopic tube, but as this tube is of large diameter, it is well capable of resisting the cantilever loads. The Dunlop wheels are fitted with independently-operated brakes, and in place of the old-fashioned tail skid there is a castering tail wheel.
The Siddeley "Lynx" engine is completely surrounded by a N.A.C.A. cowling ring, and a single exhaust collector pipe runs under the fuselage to a point near the trailing edge of the lower wing, Petrol is carried in two tanks in the upper plane, one on each side of the fuselage, and each tank has a capacity of approximately 25 gallons. The position of the tanks is, of course, such that direct gravity feed to the engine is available. A Fairey metal airscrew is fitted.
The internal layout of the cabin has been very carefully studied, and the seating arrangement consists of two separate seats side by side in front, from either of which the machine can be piloted. Behind these two seats is a sofa seat running right across the cabin and wide enough at a pinch to seat three passengers, although for real comfort "three is a crowd." Underneath the sofa seat is a large luggage compartment.

Controls of normal type are provided, the wheel control for the elevator and ailerons being of the "swing-over" type, so that the machine can be piloted from either the left or the right seat. There is a locking catch which engages when the wheel is fully over to one side or the other, and another catch locks the control column in a fore-and-aft position to prevent the elevator flapping about when the machine is standing on the ground.
Instrument board arrangement has been given very particular attention, and in the Avro "Commodore" the instruments are not only farther away from the pilot than is usually the case, which should cause a great deal less fatigue in watching the instruments, but they are placed on a sloping panel, which also assists in making them very easily readable. The equipment of the cabin is extremely complete, but can be varied according to customers' requirements. The sketch on page 536 shows the cabin arrangement admirably, and was made in the first of the "Commodores" to be completed (a considerable number are on order). The electrical equipment includes a starter, so that the engine can be started by the pilot himself from the cabin.
Large windows in the side of the fuselage and a windscreen composed of very large triangles afford an excellent view in all essential directions. The top plane does not extend across the cabin, and thus it has been possible to provide a large roof light. Behind this is a circular emergency exit at present covered with fabric. We feel that if a transparent covering were substituted over this exit, it would be a considerable advantage since in that case the occupants of the machine would be able to have a good look upwards and backwards before taking off, so as to ensure that another machine was not about to land at the same time. The cabin is well ventilated and the noise from the engine is not obtrusive, so that it is fairly easy to carry on a conversation during flight.
The machine is equipped with navigation lights for night flying and also carries blind-flying equipment, so that for extended tours, when all sorts of weather may be encountered, the owner of an Avro "Commodore" should be able to continue his flight to his destination.
A petrol capacity is provided sufficient for 4 1/2 hours at a cruising speed of 110 m.p.h., or a range of approximately 500 miles in still air. With this quantity of petrol and four people on board, there is still available a load of 209 lb. for luggage, etc. If a fifth person is carried the luggage load is reduced to about 50 lb. for full range. The gross weight of the machine is 3,500 lb., and as the tare weight is 2,225 lb., the ratio of gross weight to tare weight is 1.575. In other words, the machine carries 57.5 per cent, of its own weight as disposal load. This is about an average ratio and is actually very much better than appears, because in the tare weight is included the very complete cabin equipment.

FOR COMFORT AND SOLIDITY: Spectacular performance has not been sought in the design of this Lynx-engined Avro. The machine is a 4-5 seater with dual control, and is finished and upholstered in a style comparable with that of a high-class motor car.

THE AVRO "COMMODORE": The undercarriage is semi-cantilever, and the wing bracing consists of a single lift wire and a single anti-lift strut. 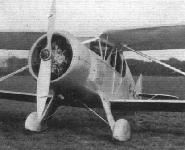 THE BUSINESS END: The Siddeley "Lynx" is enclosed in a N.A.C.A. cowling. An electric starter is fitted.

THE AVRO "COMMODORE": Ailerons are fitted on the lower wing only, where they are readily accessible for adjustment.

TAKER - AND TAKEN: This snapshot was taken from an Armstrong Whitworth Whitley. In the Avro Commodore, flown by Flt. Lt. Reynell, is Flight's chief photographer, and they are just manoeuvring into position to secure the striking close-up picture.

One of the two Avro 641 Commodores operated in the late 'thirties by the EAAF’s Royal Flight, one having been purchased from an Egyptian private owner and the other from Sqn Ldr V H Tait, seconded from the RAF as CO of the first EAAF squadron.

THE CABIN ARRANGEMENT: Plenty of room everywhere, and a good view in all essential directions are the outstanding features. The instrument board lay-out is unusual. 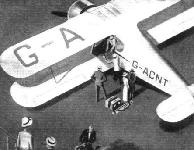 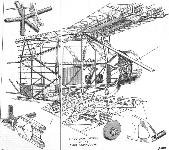 The larger sketch shows the arrangement of the main fuselage and wing structure members, while the smaller sketches illustrate some of the details.