THE MAKHONINE VARIABLE AREA MONOPLANE: This view shows the wing area reduced almost to its minimum, as it would be in the high-speed condition.

THE MAKHONINE MONOPLANE: View of the machine with wings extended, as for takeoff and landing. 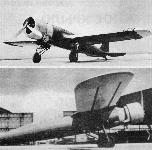 THE MAKHONINE WING: This sketch is purely diagrammatic, in order to show the principle, and does not correspond closely with the actual wing.