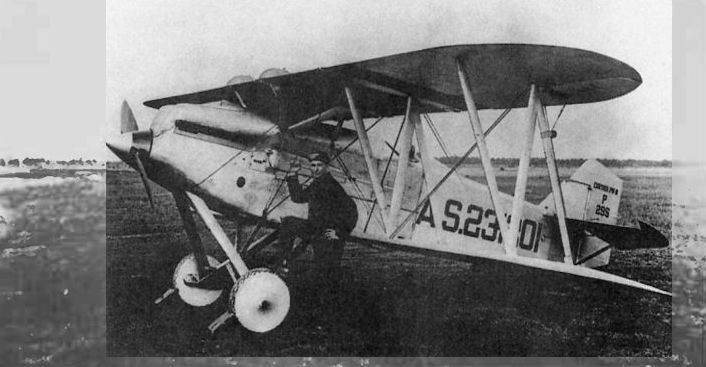 The Curtiss PW-8 was developed from the R-6 racer that took first and second places in the 1922 Pulitzer Trophy Race. In April 1923 the US Army placed a contract for three XPW-8s to be tested by the Air Service with 440 h.p. Curtiss D-12 engines (developed from the Kirkham engine). The first example was photographed in the snow and displays the radiators mounted as part of the upper wings’ skins, as originally fitted to the racer.

As their D-12 engines tick over, a well-dressed lady watches two PW-8s of the 95th Pursuit Squadron, 1st Pursuit Group, prepare to take off from Selfridge Field, Michigan, in 1925. Despite the type’s troublesome wing-mounted brass radiators, which were vulnerable to gunfire from above, Curtiss won a contract to build 25 PW-8s in September 1923. PW-8 24-203 was flown by Lt Russell Maughan on June 23, 1924, during the first dawn-to-dusk crossing of the USA.

SOME CONSTRUCTIONAL DETAILS OF THE CURTISS P.W.8: 1. One of the "cellular" wing panels, which is covered with Curtiss-ply. 2. Centre-section wing radiator unit. 3. Engine and fuel tank section of the fuselage. 4. The tubular steel fuselage. 5 and 7. The welded steel tail units. 6. Engine mounting.
<<   0/0   >>