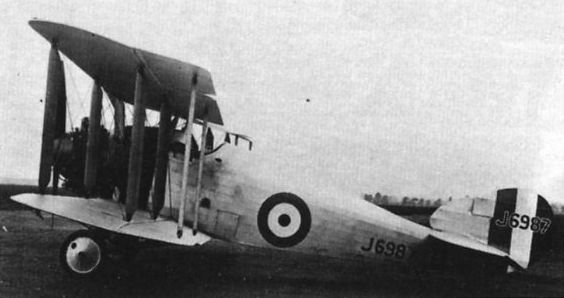 ALL who witnessed the magnificent exhibition of flying at the R.A.F. Pageant by Flight-Lieut. Bulman, on the Sopwith-Hawker "Woodcock," with "Jupiter" engine, were much impressed by the excellent performance of this machine. Designed by the H. G. Hawker Engineering Co., of Kingston, who are now commencing a further batch of these interesting machines, the "Woodcock" may be described as a night-flying single-seater fighting machine. Unfortunately, permission is obtainable from the Air Ministry (and rightly so) for publication of exterior views only, and a general description without details of performance. The machine has a particularly clean outline, and its exceptionally wide speed-range makes it eminently suitable for night-flying work. The Bristol "Jupiter" engine forms the power unit, and the cowling has been arranged in such an ingenious manner as to form separate "helmets" over each cylinder, the helmets being fitted with shutters, operated by the pilot, so that the temperature of the engine may be regulated according to the speed and altitude.
The pilot has an exceptionally fine field of vision, and the machine exhibits in a marked degree those essential qualities of manoeuvrability and stability, the controls, which are on the differential principle, incorporating some particularly interesting devices.
The undercarriage is of the oleo type, and is very neatly attached to the fuselage. The latter is of orthodox construction, and the tail is adjustable from the pilot's seat. The planes are single-bay type, of timber and fabric, but tests with a metal construction plane have proved very successful, and the production machines will probably be so equipped. The machine has a span of 32 ft., the length overall being 26 ft., and the height 10 ft. Further particulars, as before mentioned, may not be given, but sufficient may be gathered to glean that the performance is exceptional.

THE "Woodcock" is the standard single-seater night fighter of the Royal Air Force. The power unit is the Bristol "Jupiter," Mk. IV, radial air-cooled engine, and the armament consists of two Vickers guns, one on each side of the fuselage. This disposition prevents the flash from interfering with the pilot's vision at night.
The speed range renders the machine particularly suitable for night operations, and the cockpit is extremely comfortable.
Fuselage. - The fuselage is of timber construction utilising ash longerons and spruce struts braced with high tensile steel tie rods. Provision is made for wireless receiving and transmitting apparatus and oxygen supply. The instrument board is neatly arranged and provision is made for central lighting.
Wings. - The wings are of equal span and of timber construction. The spars are of solid spruce with widely spaced ribs braced with tie rods. The ailerons are operated by a differential gear from the bottom planes. A portion of the centre section is detachable to allow for the fitting of an extra tank of 18 gallons capacity, giving additional range if required.
Tail Unit. - The elevators, fin and rudder are constructed of steel tube, and the tail plane spar is of the same material. Adjustment by means of a hand-wheel is provided from the pilot's seat. The tail skid is of steel tube with a cast-iron shoe.
Engine Installation. - The "Jupiter" Mk. IV engine is installed on a simple steel tube structure and plate. The four main members are ball jointed at the fuselage end, fitting into a socket on the bulkhead, a spherical cover ensuring perfect alignment. The whole unit is quickly and easily detachable. The petrol tank is of tinned steel with 52 gallons (234 litres) capacity.
Undercarriage. - The undercarriage is of steel tubes with duralumin radius rods and incorporates the oleo principle. The track is of ample width and facilitates landing.

The Woodcock was the first fighter to he produced by Hawker, but its qualities proved disappointing.

THE HAWKER "WOODCOCK": Another recent single-seater fighter biplane, fitted with a Bristol "Jupiter."

The Woodcock II differed appreciably from the original Woodcock and served with RAF squadrons until 1928.

The RAF’s first Hawker fighter was the Woodcock; two squadrons were equipped, Nos 3 and 17 (illustrated)

A brace of Hawker Woodcock IIs, fitted with the 420 h.p. Bristol Jupiter IV. The foremost aircraft, J7515, was the fourth production aircraft. On July 1925 it was flown by Flt Lt P. W. S. Bulman in the King's Cup Race as G-EBMA, the only civil Woodcock, but crashed at Luton.

R.A.F. DISPLAY AT BLACKPOOL: The huge crowd that visited the Blackpool Air Pageant on July 7 were lucky witnesses of a splendid imitation of the R.A.F. Display at Hendon. This view shows the familiar Air Force machines which took part: Hawker "Woodcocks"

THE KING'S CUP: Some of the first day's starters. 5, Bulman on the Hawker Woodcock, dodging the rain.

MANOEUVRABILITY: The Hawker "Woodcock" with Bristol "Jupiter" engine doing a steeply-banked turn close to the ground near the Hawker sheds at Brooklands. The pilot was Mr. Bulman, chief test pilot to the H. G. Hawker Engineering Company.

The Hawker "Woodcock" (Bristol "Jupiter") Designed and built by the H. G. Hawker Engineering Co., which may be said to be carrying on the traditions of the late Sopwith Aviation Co., the "Woodcock" single-seater fighter may justly be regarded as the scion of a long family, commencing with the little Sopwith "Tabloid." The "Woodcock" is of normal straightforward design, but, as in so many other cases, appearances are deceptive, and the machine possesses features which a casual examination might fail to reveal. The Hawker "Woodcock" forms the standard equipment of No. 3 (Fighter) squadron, Upavon, and No. 17 (Fighter) squadron, Hawkinge. 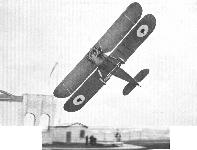 UPS AND DOWNS: Two views of the Hawker "Woodcock," piloted by Mr. Bulman, flying at Brooklands. When the photograph on the left was taken the machine was doing a banked left-hand turn close to the ground, our photographer enjoying a point of vantage above the machine.

AT THE BRISTOL MEETING: The R.A.F. contribution was in the form of demonstrations, bombing and machine-gunning by three Hawker "Woodcocks" with Bristol "Jupiter" engines, here seen in formation "line astern."

THE BRISTOL FLYING .MEETING: 4, Three Hawker "Woodcocks" from No. 17 Squadron give a fine display

FORMATION FLYING EXTRAORDINARY: Daily visitors to Lympne during the light 'plane competition were "Grebes," "Woodcocks" and "Gamecocks," whose evolutions were generally admired. Our photographs show these machines in various formations.

The Hawker "Danecock": Three-quarter front view. The engine is an Armstrong-Siddeley "Jaguar."

THE HAWKER "DANECOCK": This front view gives a good idea of the large span single-bay bracing, and the generally "clean" lines of the machine.

The Hawker "Danecock": Side view. Note the Danish flag on the rudder.

CONTROLLABILITY: These two photographs of the Hawker "Danecock," photographed from another aeroplane, show two stages of a "slow roll" carried out by Flight-Lieut. Bulman, the firm's chief test pilot. In the larger photograph the machine is seen going into a left-hand roll, and the port ailerons can be seen to be in the maximum "up" position. In the inset the machine is on its back and is commencing to dive into a normal position.

"THAT WAS A GOOD AEROPLANE THAT IS": Reversing the now famous "Shell" slogan seems apt in connection with this Hawker "Danecock" with Armstrong-Siddeley "Jaguar" engine which, although delivered by the Hawker Company to the Danish Naval Air Service in 1924, has recently won the Nordic Cup Competition piloted by Lieutenant Erik Rastnussen, Royal Danish Navy. The course was one of 800 miles, and pilots from Norway, Sweden, Finland and Denmark took part. The "Danecock" is still the standard fighter in Denmark, and the same officer and machine still hold the Scandinavian altitude record established just over two years ago.

AN ANGLO-DANISH ALLIANCE: This series of photographs show the Hawker "Danecock" with Armstrong-Siddeley "Jaguar" engine, of which three were recently delivered to the Danish Government. A further number will be built at the Naval dockyards at Copenhagen. These photographs were secured during a test flight at Brooklands recently, and show the machine in a number of various attitudes. The pilot was Flight-Lieut. Bulman.

A prized exhibit in the Copenhagen museum of the Royal Danish Arsenal is the Hawker Dancock, only surviving example of this 1927 biplane with an Armstrong-Siddeley Jaguar IV radial engine. No 158 is one of the 12 Dancocks built at the Danish Naval Dockyard.

The Woodcock II differed appreciably from the original Woodcock and served with RAF squadrons until 1928.
<<   0/0   >>