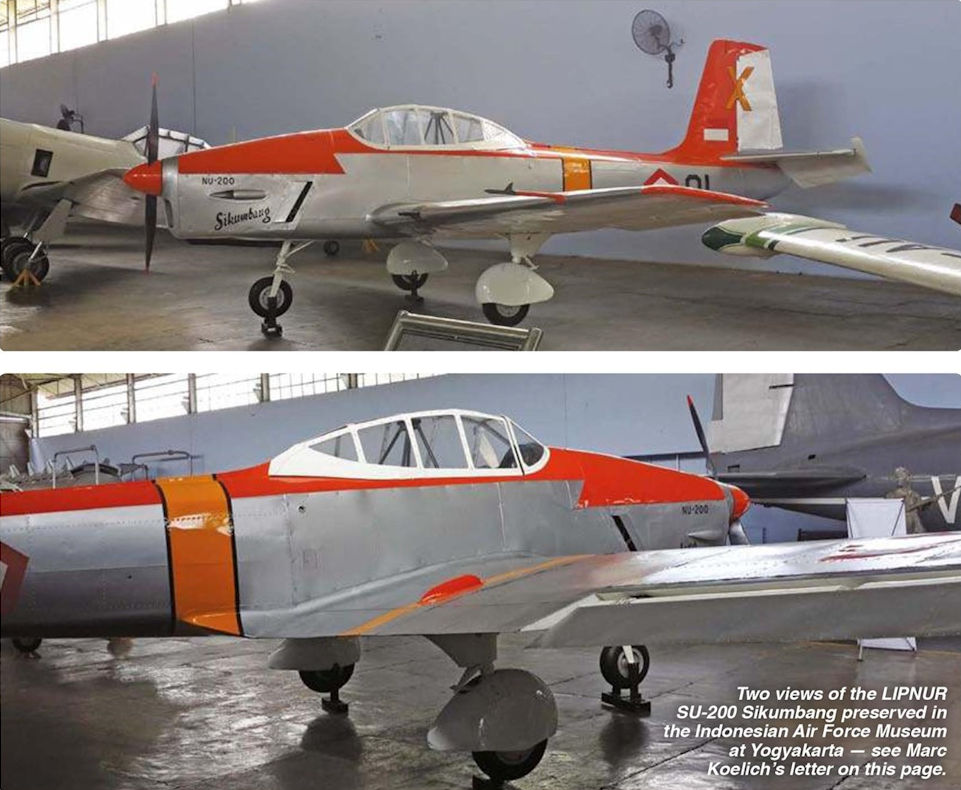 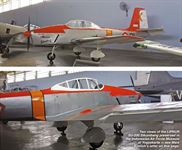 Two views of the LIPNUR SU-200 Sikumbang preserved in the Indonesian Air Force Museum at Yogyakarta.

The sole NU-200 Sikumbang aloft after its first flight in August 1954. Bearing a large “X” on the tail to denote its experimental status, the “Bee” also carried the nation’s red-and-white pentagon marking and the serial “01”. The bare-metal fuselage was wrapped with a yellow band and the upper surfaces and fin were orange-red.

An air-to-air study of the NU-200, the first original design of the Air Force's Experimental Section which commenced flight testing in August 1954, showing the aircraft’s straight-tapered wing, which was of single-piece wooden construction with an aspect ratio of 6-5:1. Contemporary press reports highlighted the NU-200’s similarity in intended role to the USA’s Fletcher FD-25 Defender COIN aircraft, which was not adopted by American forces.
This aircraft is today mounted on a pedestal at the entrance of the Nurtanio factory.

NU-200 Sikumbang. First flown in August 1954, the NU-200 Sikumbang is the second powered aircraft to be built in the Republic of Indonesia. A single-seater, it is intended as a prototype general purpose close-support aircraft probably to be armed with machine guns and bombs or rockets. No announcement has yet been made on production of the type.
Salient features: A low-wing monoplane, the Sikumbang has domed braced canopy, long nose and blunt fuselage tail. The nose has a distinct hump on it and the propeller boss is covered by a pointed spinner. Wings are equi-tapered and square-cut with prominent trailing-edge root fillets. The fin is equi-tapered with slightly rounded top and small dorsal fillet. The fixed undercarriage has cantilever legs which are forward raked. A small fixed tailwheel is also fitted.

Major Nurtanio Pringgoadisuryo stands beside the NU-200 Sikumbang on its roll-out at Bandung in the summer of 1954. For this article we have used the Indonesian custom of putting the surname first.

The Sikumbang awaits another flight from Husein Sastranagara Air Force Base at Bandung, with an AURI Consolidated PBY in the background. The pilot sat just above the leading edge under a sliding cockpit canopy which provided an excellent view in all directions.

The NU-225 Sikumbang flown in September 1957. This retained little more than a configurational resemblance to the original NU-200.

The cockpit of the NU-200 was relatively simple, but included all the necessary basics, including altimeter, r.p.m. gauge, airspeed indicator, turn-and-bank indicators, compasses, fuel gauge, climb meter and manifold­pressure gauge. The throttle box was located on the port side, above the trim-control equipment, seen at LEFT.