Armstrong Whitworth A.W. 23: Designed and built by Sir W. G. Armstrong-Whitworth Aircraft, Ltd., the A.W.23 is a low-wing cantilever monoplane in which aerodynamic efficiency has been raised to a high ДальшеMore>>> degree of perfection. This has been achieved by suppressing all drag-producing excrescences, notably the undercarriage (which is retractable) and bombs (which are stowed inside the machine and not carried under the wings) There are enclosed turrets for front and rear gunners, and the pilot's cockpit is totally enclosed. The machine can be used alternatively for the transport of troops and stores, as a heavy bomber, or as an ambulance. The engines fitted are two Siddeley “Tiger VI” fourteen-cylinder radials of 760-810 b.h.p. each, faired into the leading edge of the wing. The span is 88ft. and the length 80ft. 9in.

THE LATEST: It is now permissible to publish a photograph of the new Armstrong-Whitworth Bomber Transport - a low-wing cantilever monoplane with retractable undercarriages. The engines are Siddeley "Tigers."

In the nose and tail of the A.W. XXIII there is an Armstrong-Whitworth revolving gun turret. The position from which this photograph was taken - the gunner's cockpit in a following machine - would be by no means an enviable one in time of war. 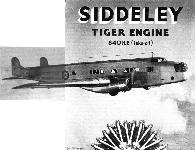 CIVILISING INFLUENCE: The Armstrong Whitworth XIII Bomber Transport which is being handed over to Imperial Airways after suitable modifications have been made for its use as a transport rather than as a bomber. This machine has been fitted with Tiger IX's (790/880 h.p.) and D.H. v.p. airscrews and was designed to carry twenty-four soldiers with full equipment. It might be suggested that the nose and tail cupolas should be retained for use by any passengers who are prepared to pay for the excellent view obtained.

A SERVICE HEAVYWEIGHT. The Armstrong Whitworth bomber transport monoplane flies high and fast, presenting a magnificent "shot" for Flight's photographer. With two Siddeley Tiger VI engines not only does the machine possess remarkable weight-carrying properties, but it is extremely fast for an aircraft in its class and has, in addition, a long range. 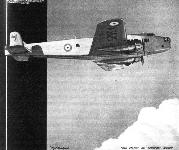 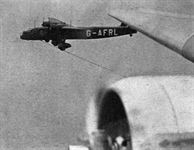 REFUELLING TESTS: An Armstrong Whitworth A.W.23, acting as the “receiver,” taking on fuel from a Handley Page Harrow, used as the “tanker.” The hose pipe passes from the forward part of the tanker to the stern of the aircraft to be fuelled. Our photograph was taken from the latter machine. 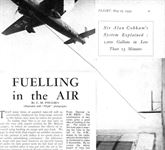 From Harrow A.W. XXIII: combination of views gives a good idea of fuelling in the air. The nozzle of the hose pipe is nearing the cone in the tail of the A.W., drawn by the cable, which is shown slightly thickened to make it discernible. By no means the whole length of hose had been reeled off when the picture was taken.

Inside the receiving aircraft: On the back of the cone are the toggles and their piping. The hauling line passes through the central tube to the winch. The petrol pipes run from the two flanges to the tanks, but were not in place when this picture was taken. 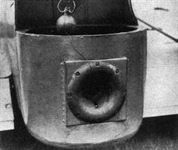 The cone in the stern of the receiving aircraft: The ends of the toggles can just be seen projecting through their slits. The weighted grapnel on the end of the hauling line is seen on top of the cockpit coaming. Note that the cable passes through the centre of the cone, into the pipe shown in the internal view on the left.

K3585, the sole example of the AW.23 bomber-transport built

A low-altitude aerial view of the "New and Experimental" park. The big machine in the centre, dwarfing the D.H. "Comet" in front of it, is the A.-W. bomber transport. 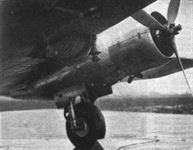 TROOPER-TANKER: The hose reel on the A.W.23 troop carrier now being used by Sir Alan Cobham for refuelling experiments on the South Coast. An Empire boat has already acted as refuellee.

THE AW GUN TURRET: A MOUNTING for a free gun approved by the British Air Ministry for any station on modern high performance aircraft. A patented system of linkage relieves the gunner of the influence of accelerations. The operation is entirely manual.

Installation of the turret in the tail of the A.W. XXIII.

These diagrams show the method of operation of the A.W. turret. The gunner stands to fire downwards.