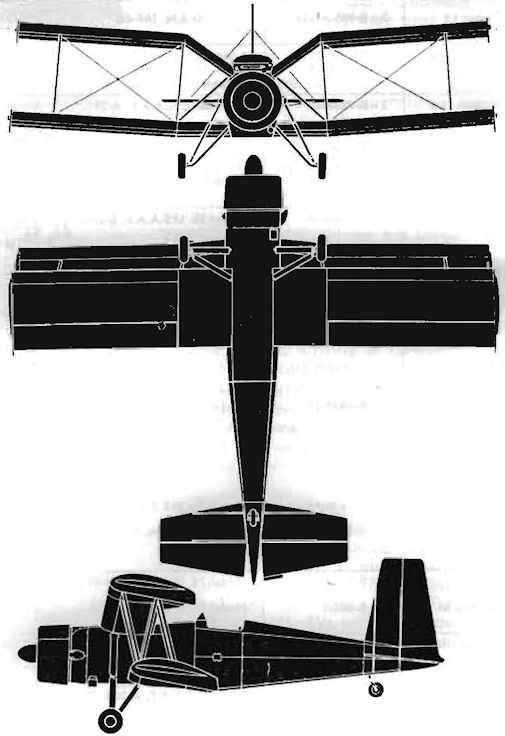 CENTRAL-LAMSON MODEL L-101 AIR TRACTOR. Aerial crop-dusting is no recent or even post-war facility provided - in particular - by fixed-wing aircraft. True, the wartime development of rotary-wing aircraft has opened up new horizons, but for the time being the helicopter remains the more expensive and complex solution to the manifold varieties of aerial dusting, spraying and seed-sowing demanded by the world's agriculturists.
The greatest strides in developing the industry have taken place in the U.S.A. and the U.S.S.R. Post-war countries include Australia and New Zealand, as well as certain underdeveloped countries supported, in this direction, through various United Nations organisations.
Although two prototypes of the Central-Lamson L-101 Air Tractor Single-seater have been flown, production of this mixed wood and welded-steel tube construction biplane has not proceeded because of high initial costing. The "power eggs" are military Wasp Junior radials from surplus Convair (Vultee) BT-13As and 'Bs.
The striking gull-wing effect of the upper mainplanes is created by the dual requirements for unimpaired forward vision and simplified hopper loading. The 50-cu. ft. hopper is situated in front of the pilot's open cockpit. The first prototype Air Tractor, which flew on 10th December 1953, has an uncovered rear fuselage, whilst the L-101 shown here has sheet metal panels (unstressed) covering the rear fuselage. This second prototype flew for the first time on 18th December 1954. The sheeting has improved the all-round flight performance. The utility of the L-101 is increased by the adoption of interchangeable wing, panels of wood with fabric covering. The inner sections are cantilever stubs. The distinctive wingtip end plates are designed to reduce air spill and improve lateral control, at critical speeds and angles of incidence.
The welded steel tube fuselage structure supports the conventional tail assembly of metal construction with fabric covering.
<<   0/0   >>