SCALE drawings and detail sketches of a twin-engined machine built by Central Aircraft Co., of Kilburn, were published by <…> of September 25, 1919. This machine was crashed during trial flight, owing ДальшеMore>>> to the omission of a rigger of cross<…>elevator cables. Before the crash, however, the machine <…> numerous flights, during which she had proved to be very efficient as a weight lifter, considering that the power <…>ing was high, the machine being fitted with two Beardmore engines of 160 h.p. A second machine has been finished in some time now, and has again proved the qualities of Mr. Fletcher's design. The second machine, of which we publish several photographs below, is identical with the previous type, excepting the cabin arrangement. In the first machine the passengers' accommodation was left open, as it was thought that the best policy would be to see how the machine behaved before fitting her out with an elaborate cabin. In the present machine, however, a cabin super-structure has been added, inside which the passengers are comfortably seated in three pairs. In front of the cabin is the pilot's cockpit, which also accommodates an "outside" passenger. This brings the total live load up to eight people, including the pilot. While this is a not inconsiderable load for 320 h.p., it does not represent all that the machine is capable of. Recently a demonstration was given of flying with eight up plus a sand load of about 400 lbs., so that the weight carried was equivalent to at least ten passengers.
Even with that load the machine got off very quickly, piloted by Lieut. F. T. Courtney, and climbed very well. The day was windy, with many gusts, but the machine appeared to be very steady. After climbing to about a thousand feet or so, Mr. Courtney gave a demonstration of flying on one engine only, the other being throttled right own. So far as one could see there was little tendency for the machine to get into a spin, the large rudder and fin preventing this. It was, however, found that there was not quite sufficient movement of the rudder to overcome the yawing moment without slightly diving the machine so as to maintain the speed. This can be easily overcome by a slight alteration to the tail, and there is then little doubt that the machine will be able to stay up with only one engine running. That she lost height during the demonstration flight - and not a great deal of it at that - was not directly due to the halving of the power, but to the necessity of diving to make the rudder sufficiently effective. When alterations have been made which will allow the rudder to be moved to a slightly greater angle, the yawing moment should be easily overcome without diving.
With the load carried last week the machine has a speed of close on 80 m.p.h., which is distinctly good for such a high power loading, and in a third machine, which is now coming along, several refinements will be incorporated, which, it is anticipated, will bring the top speed up to about 90 m.p.h., with an economical cruising speed of about 75 m.p.h. The machine will then be a very economical one for commercial work, as the engines are very economical in fuel and oil consumption, and the speed is such as to be sufficient for most purposes. Add to this the fact that the machine gets off very quickly and pulls up after a very short run, and it will be seen that Mr. Fletcher and the Central Aircraft Co. have produced a machine which is full of promise as a real commercial proposition, the running expenses being exceptionally low, while the constructional design is on such simple lines as to be cheaply produced and cheaply repaired. We have little doubt that the machine will be extensively used not only in this country but also abroad and in the Colonies, for which latter it would appear to be especially suitable.

The machine entered by the Central Aircraft Co., Ltd., is the twin-engined cabin machine known as the "Centaur 2A." It has already been described in this journal (May 27, 1920), and only a brief reference to it will be necessary here. The first machine of this type was of the open fuselage passenger carrier type, and came to grief as a result of the carelessness of a mechanic in rigging the elevator control cables. The present machine is similar to the earlier model except that the passengers' accomodation takes the form of an enclosed cabin. The pilot and one passenger, or an engineer as the case may be, are seated in the nose of the fuselage in front of the cabin, the two seats being placed side by side. Inside the cabin seating accommodation is provided for 7 passengers, who obtain a good view through windows in the side.
The machine has a total wing area of 895 sq. ft., and the weight loaded is 5,400 lbs. giving a wing loading of 603 lbs./sq. ft. The power loading is 169 lbs./h.p., and the speed is 85 m.p.h., with a landing speed of 38 m.p.h.. The petrol consumption is 25 gallons per hour, which must be considered economical for a load of eight passengers in addition to the pilot. 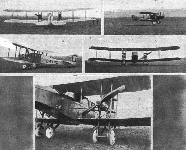 TEN PASSENGERS ON 320 HORSE-POWER: A Central Aircraft Co. cabin machine at Northolt. Our photographs show the machine in front, rear, and three-quarter rear views. The lower picture shows the cabin and one of the 160 h.p. Beardmore engines. In the top right-hand corner the machine is seen taking off with eight people and 400 lbs. of sand on board, piloted by Lieut. F. T. Courtney