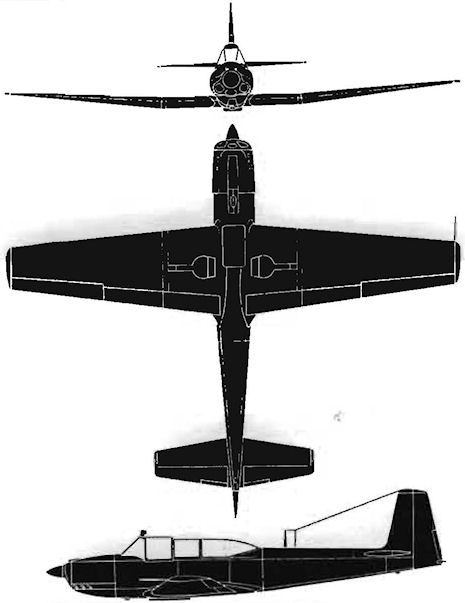 LETOV L-8 (TOM-8). A smart-looking basic trainer is the Czechoslovak Letov L.8 which made its debut on 26th April last year. The Letov L.8 is also known as the TOM-8 after the bureau design chief Ing. Karel Tomas.
The Czech air force plans to replace the standard piston-engine basic trainer (the Letov-built C.2B - the Czech version of the wartime Arado Ar 96B) with the Letov L.8.
Ing. Tomas has designed the L.8 round the six-cylinder, horizontally opposed, piston, 235-h .p. M-208-C which is also known as the Praga Doris C. The Doris C is a development of the 220-h.p. (3,000 r.p.m .) Doris B flat-six . The two-blade metal airscrew (V.421) has variable pitch and the hub is covered by a pointed metal spinner. A curious feature of the powerplant is the engine cowling with a triple entry intake - the centre one being the carburettor air intake.
Of all-metal construction the Letov L.8 has a cantilever wing with split metal flaps, which like the nosewheel-type retractable undercarriage, is electrically operated by way of a 1,500-watt generator situated in the fuselage.
The Letov L.8 is fully aerobatic and is equipped for night flying and instrument training . Light bombs can be mounted under each wing. Gunnery instruction is also catered for.
The prototype Letov L.8 is finished in light grey and has the Czech air force markings on the wings and the fin/rudder. On each side of the rear fuselage is the large serial number "K-01" painted in black.
<<   0/0   >>