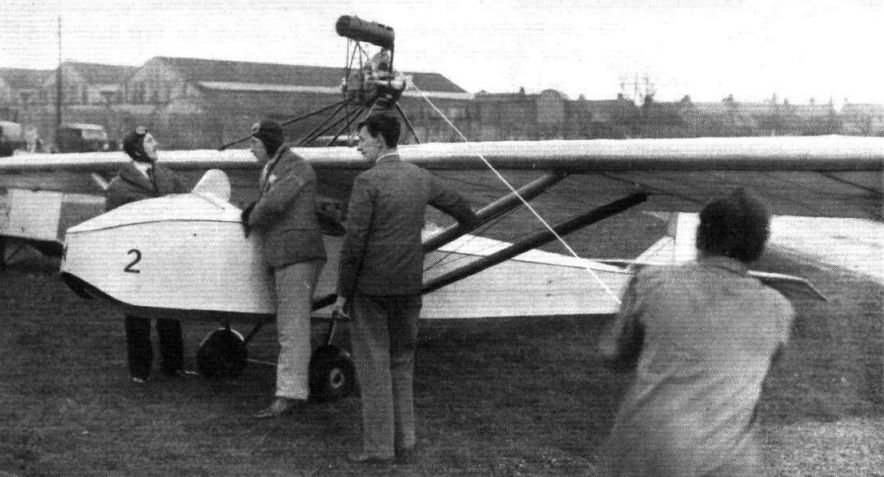 FLYING the NEW DRONE
By H. A. TAYLOR
Impressions of the Latest Version of a Well-established Ultra-light Single-seater

FOR a number of years certain private owners and club pilots have been asking for a pusher type, and those among them who have had a chance of flying the Drone or the Super Drone - the newest version - must have stepped out of this little machine feeling all the more certain that pusher flying is real flying.
Nowadays, the Super Drone is something a good deal more than a glider with an engine, and Lord Sempill's flight to Berlin and back has shown that it can do a heavy job of work so long as the pilot is not too impatient. With a cruising speed of 60 m.p.h. it is not always possible to make a journey according to plan, though the five-hour endurance is very useful when head winds are encountered. Nevertheless, its ability to fly safely at something under 25 m.p.h. means that the Drone pilot can be out and about when others are eating their heads off on the tarmac. The machine was originally developed by the late Mr. Lowe-Wylde in 1932, and the new company was formed last year.
Certainly, the Super Drone is one of the most intriguing machines in the air that it is possible to imagine and, furthermore, it is just about as safe as anything could be. The pilot has a complete range of forward visibility and, with no slipstream to bother him, he can fly naked and unashamed without discomfort. The landing is simplicity itself, and the stall produces nothing worse than a momentary dip of the nose; full rudder with the stick back involves a steep spiral which corrects itself as soon as the stick is eased forward again. Even to the pilot who is accustomed to the vitality of the normal machine the controls are not unduly sloppy, though there is, at low speeds, a certain tendency for the Super Drone to take its own time over entering turns and stopping gentle yawing movements.
Various people on the Continent have interested themselves in the machine, and building licences have been granted to firms in France, Belgium, and Holland. A 750 c.c. Douglas engine is the standard power unit.
The specification of the Super Drone is as follows: Span folded, 10ft.; length, 27ft. 10in.; weight empty, 390lb.; disposable load, 250 lb.; maximum speed, 70 m.p.h.; cruising speed, 60 m.p.h.; landing speed, 22 m.p.h.; initial rate of climb, 380 ft./min.; cruising range, 300 miles. Price, ?275. Makers: B.A.C. (1935), Ltd., Hanworth Aerodrome, Feltham, Mddx.

THE LATEST TREND: Mr. Lowe-Wylde - as usual pioneering - with his latest venture. He has, for experimental purposes only, added a motor-cycle engine to his B.A.C. VII two-seater and has already done a considerable amount of successful flying with this combination.

Drone G-AEAN was short lived. Registered in January 1936, it flew with C.W.A. Scott's circus that season but crashed at Southend on July 22, 1936.

PRACTICAL PROOF: On December 20 Mr. Robert Kronfeld delivered a B.A.C. Super Drone to Holland and flew well over 200 miles non-stop in the process. He left Hanworth at 10.30, cleared Customs at Croydon and landed eventually at Zierikzee, some twenty miles from Rotterdam. The weather was foggy and cold, but, with the new exhaust-warmed induction system, no trouble was experienced. In this photograph the Super Drone is being demonstrated by Mr. Kronfeld at Schiphol, Amsterdam.

Mr. E. D. Ayre sets off, pipe in mouth, to give a demonstration of the impossible - with the B.A.C. "Drone."

A number of modifications, together with the use of a 750 c.c. Douglas engine, result in a considerably enhanced performance and improved control for the Super Drone. Mr. Kronfeld demonstrates its controllability at Hanworth.

"If we are to sit in front of the wing, why not put the engine behind, Drone-fashion?"

The B.A.C. Super Drone is an ultra light pusher type, in which the pilot has a very excellent view.

Drone G-AEKT was registered to the parent company in November 1936 and survived until the war.

FRESH FROM THE HIVE. A greatly improved version of the B.A.C. Drone has been produced and is seen here in a spirited zoom at Hanworth. The wings are now arranged to fold and there is tankage for 5 1/2 hours' fuel. Cruising and maximum speeds are respectively 60 m.p.h. and 70 m.p.h. 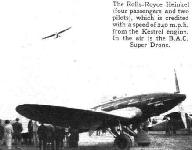 The Rolls-Royce Heinkel (four passengers and two pilots), which is credited with a speed of 240 m.p.h. from the Kestrel engine. In the air is the B.A.C. Super Drone. 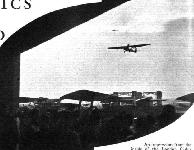 An impression from the inside of the London Club's hangar while the four Drones (two of them to be seen) shoot-up the surrounding landscape. A part of the Club fleet stands without. 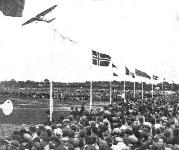 The enclosures were decorated with the flags of all nations whose countries are linked to our own by the routes of British Airways Ltd. In the air is Mr. Kronfeld's Drone. 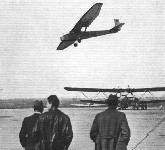 M. Manchoulas coming in to land at Le Bourget after his flight from Ghent in the Scorpion-engined power glider.

"- nothing up my sleeve." Mr. Idwal Jones demonstrates the docility of the B. A. C. Drone.

A number of different engines have been fitted to the various Drone developments. This particular model has a flat-four two-stroke Ava.

Makers of light plane history. The first attempt to revive interest in the "ultra light" was the Lowe-Wylde (now Kronfeld) Drone, seen here.

IT COULDN'T BEAT THE "DRONE.'' Rain and generally dirty weather failed to prevent Mr. Kronfeld reaching Paris in the "Drone." Here the tiny machine is seen just prior to starting from Croydon.

The Fleet: Miss Joan Meakin's Wolf glider, the Airspeed Ferry, and the B.A.C. Drone are in the foreground.

LULL IN THE STORM: Varied fauna at the Bristol club's garden party last Saturday, which suffered severely from the weather. Seen here are one of the Club Swallows, the Bristol 143, an Autogiro, a Drone, and three Harts of No. 501 (City of Bristol) Squadron. The human element is mainly seeking solace in the clubhouse, which, with the Airwork hangar, can be seen in the background.

Not quite so startling as it appears - merely the Super Drone with its wings folded, thus reducing the width for housing purposes to 10 ft. Note the wide undercarriage. 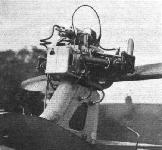 The 750 c.c. Douglas engine of the type used in the Drone. 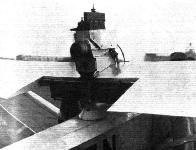 DRONE-DRIVER: The installation of the 30 h.p. water-cooled Carden in a new version of the Kronfeld Super Drone. 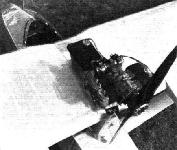 NEW POWER FOR THE DRONE: How the flat-four Ava two-stroke engine is arranged in Lord Sempill's new Drone. The airscrew is well clear of the cut-away trailing edge and the engine turns over at only 2,100 r.p.m., so the familiar noise is no longer heard; this machine has, in fact, that quality of quietude which should add greatly to the pleasure of what is now rather more than "Drone-floating." The price of this model has been fixed at ?325 with full equipment. 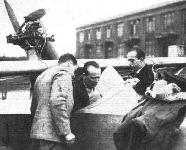 PROOF: Lord Sempill's flight to Berlin (11 hours) and back (9 hours) in a B.A.C. Super Drone must have given a jolt to those who habitually scoff at ultra-light aircraft. Lord Sempill is seen at Croydon with Mr. Kronfeld (right).

ONE OF THE LADS: A familiar overalled figure at Hanworth these days is the Baroness Rudoleine von Simolin, 17-year-old daughter of one of Germany's biggest chemical manufacturers. She is now serving a hard-working apprenticeship at the Kronfeld factory at Hanworth, and is seen here in front of the Carden-engined Drone.

ULTRA-LIGHT LUXURY: A totally enclosed and exhaust-heated cockpit has been designed for a special Kronfeld Drone recently produced to the order of a private owner, Mr. R. Dimock. It will be noticed that this machine also has a rubber-sprung split-axle undercarriage and the latest exhaust system. Mr. Dimock will not be likely to lose his hat again, (as once happened, with catastrophic results) while flying this machine.

UNDERGRADUATION: Mr Kronfeld taxies his new "flying" ground trainer at Hanworth while the latest type of Carden-engined Drone De Luxe flies overhead. The standard De Luxe model costs L325, while the ground trainer is priced at L195. The Country Flying Club, of Leicester, charge 9s. an hour for instruction on the normal ground trainer which they have been using successfully for the past month or two. 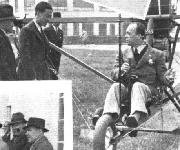 "DIVINE WIND'S" crew see something of British aviation: Messrs. Iinuma and Tsukagoshi, famed for their 100-hour flight from Tokio, recently enjoyed the hospitality of that section of the Industry which centres on Hanworth. They are seen greatly intrigued by Mr. Kronfeld's exposition of his ground trainer.

Front to rear. Lord Sempill’s special 35 h.p. Ava-powered Drone, the Kronfeld Monoplane, Kronfeld ground trainer and two Carden-Ford powered Drones. The way in which the Monoplane’s engine was moved rearwards to clear the wing can be compared with the large trailing edge cutout in the Drone.

The tricycle Drone mentioned by Mr. Dimock in his letter.
Kronfeld Monoplane

The Kronfeld Monoplane makes its public debut at the RAeS Heathrow Garden Party on May 9, 1937.

The Kronfeld Monoplane is seen there, serving as a makeshift rain shelter.

A rare picture of the Monoplane in flight, taken once again at the 1937 Garden Party.

Cockpit and sparse instrument panel of a Kronfeld Drone. 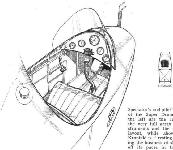 Pilot's view of the Super Drone. On the left are the controls, the very full array of instruments and the cockpit layout.